We can rebuild him

Another trip down memory lane with another 1998 pipe donation needing some work.  This pipe, which I informally dubbed the Marlowe after a certain PI, was one of the most difficult things I’d tried at the time, though looking at it now it’s a terribly clunky thing – 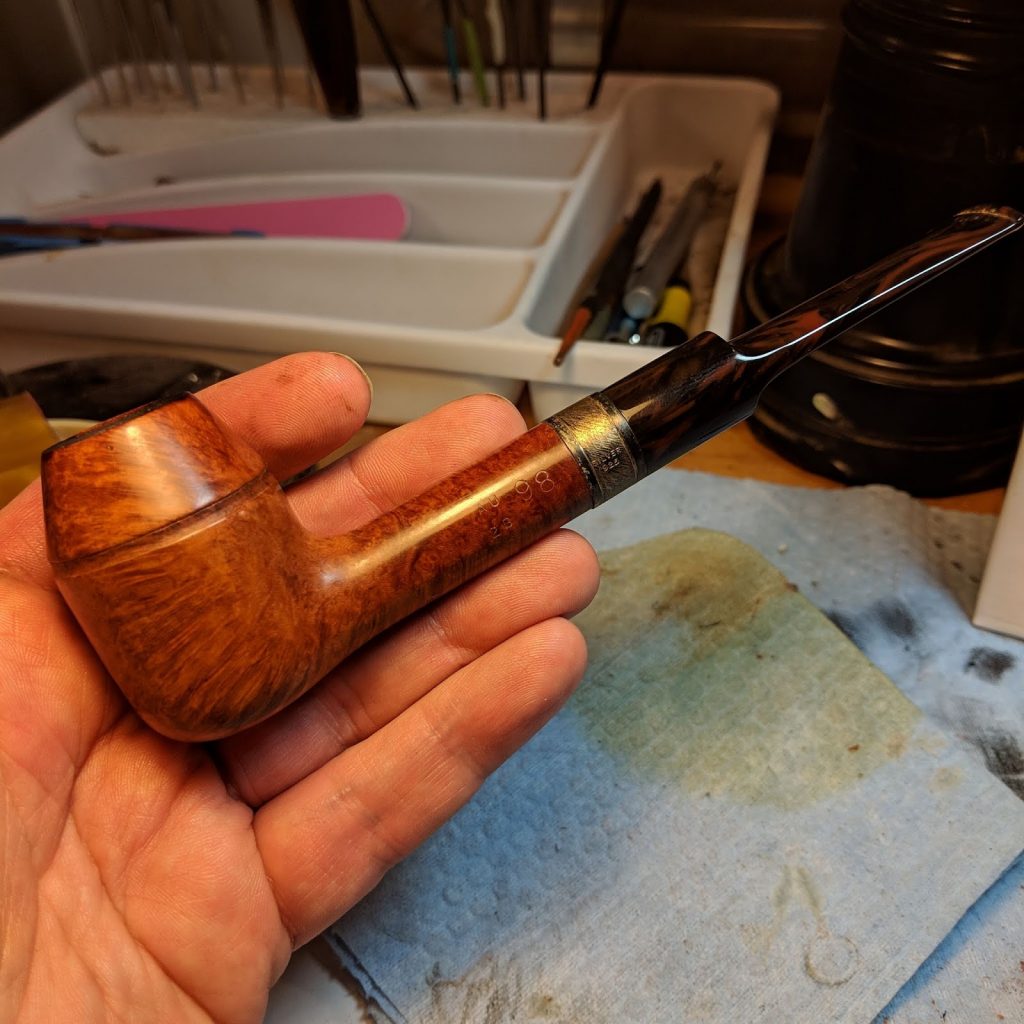 To my credit, or excuse, it was my first attempt at a “classical” shape and done without a lathe.  This is a crucial point in understanding the thing.  While it may look a bit wobbly and thick, it was not smoothly cut while spinning solidly on a benchtop lathe… It was shaped by hand files while spinning on friction mounts chucked in my hand drill which was strapped to my workbench with screw clamps.  And this while sitting in an unconditioned garage in the evenings after an 8 hour workday.  The bowl “ring” looks terrible because I was too afraid of my wobbly mount flying off to try to cut deep into the wood! In a lot of ways, even though it doesn’t look good, I’m happy it came out as well as it did considering the tools I was working with.  I’m particularly proud of the band fit I achieved – A silver band applied jeweler-style with heat expansion, which has held on perfectly through the last 21 years of use: 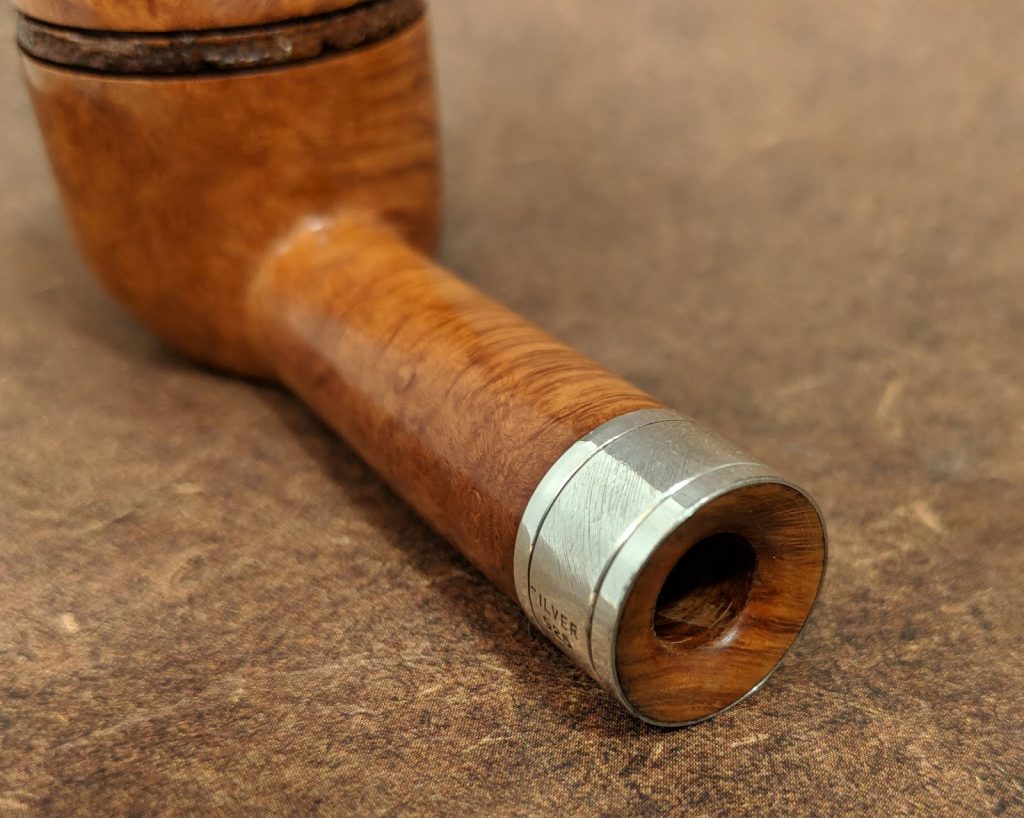 When it came back here, however, I couldn’t leave it as it was.  For one, the stem was so loose it was falling out so that HAD to be addressed, plus I just couldn’t bring myself to sell it again looking as lumpy as it did.

Where the heck to begin, though?  The constraints of the shape meant there wasn’t a lot to work with, so no wholesale redesign was possible.  Instead, I adopted a point-by-point approach, fixing each individual issue first before taking an overall appraisal of the result.  First up – The primitive bowl ring was redone as a double ring surrounding a hand-rusticated center ring: 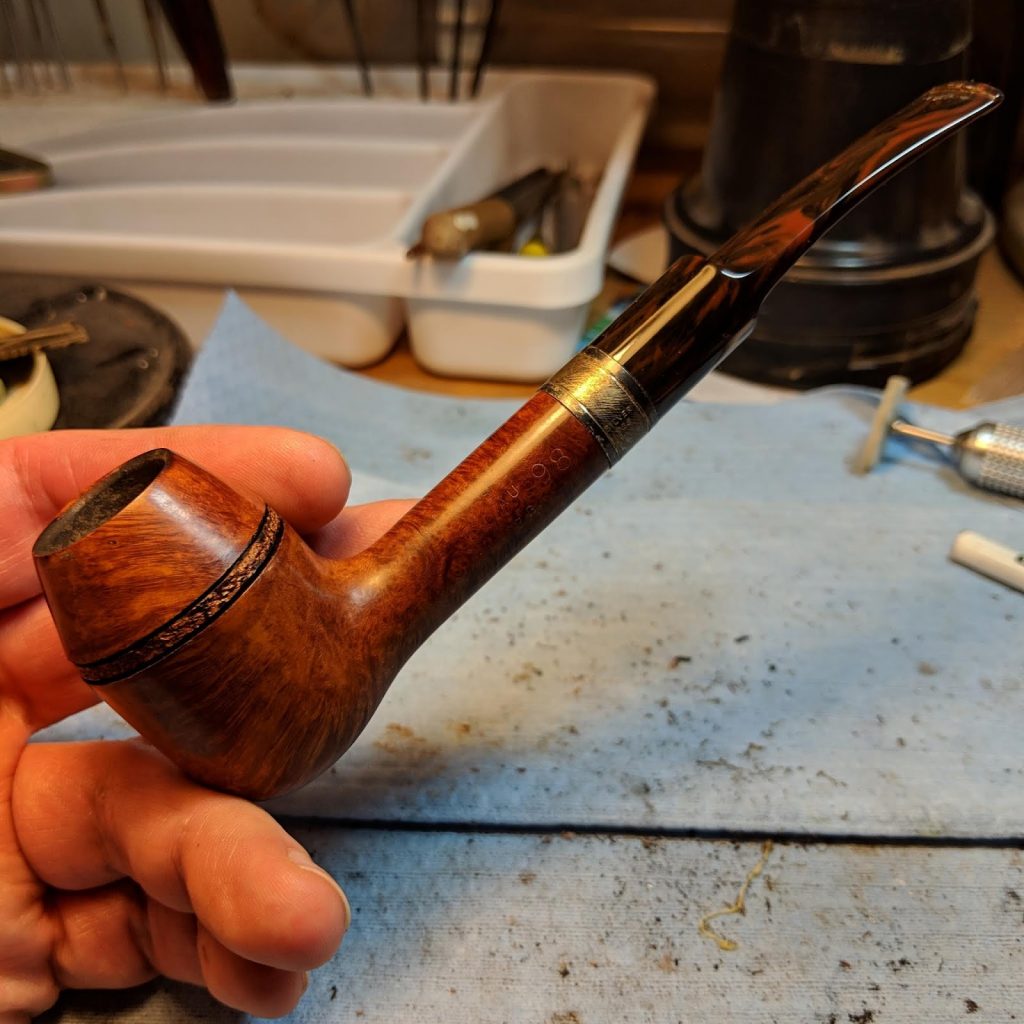 That served the dual purpose of fixing the original ring and also giving the bowl more visual “weight” to help balance that overly large shank.  Next up was tightening the shank-to-bowl join for a more polished and professional appearance: 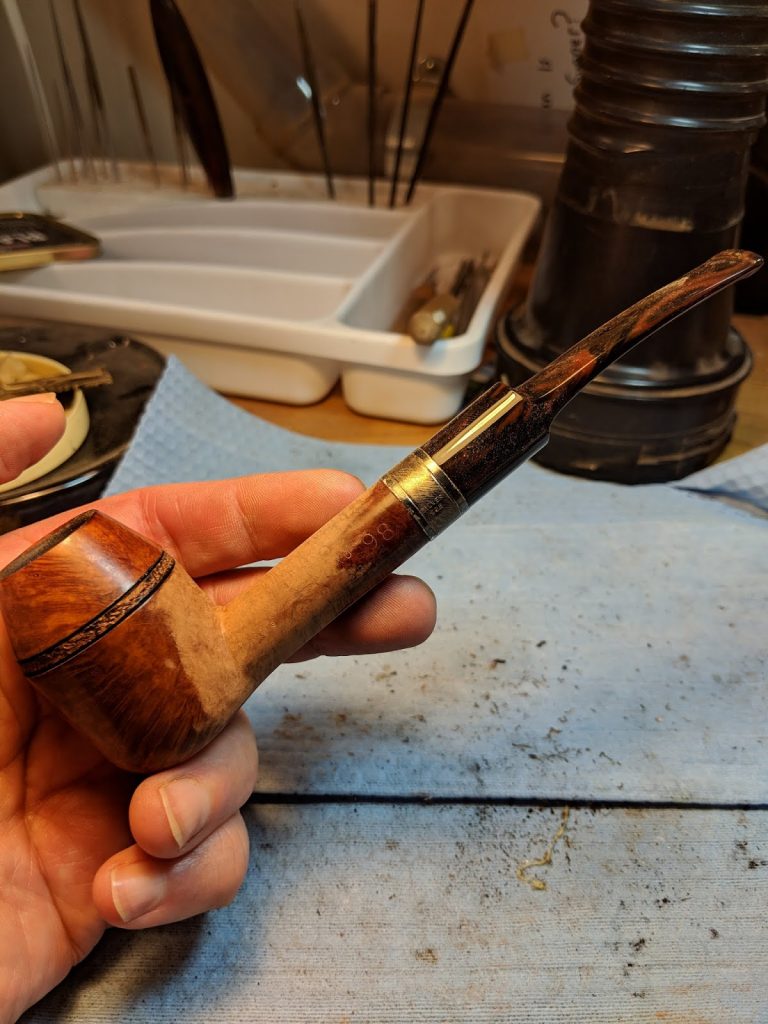 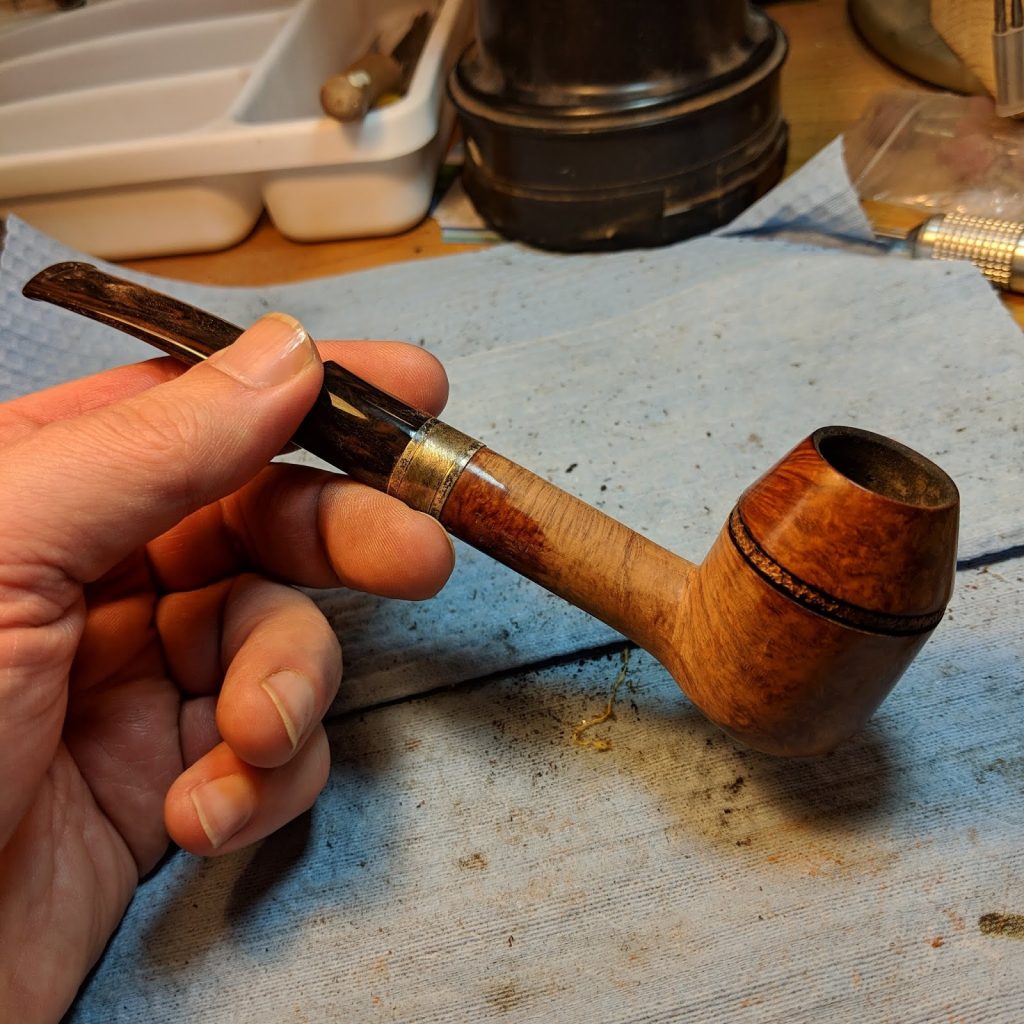 All this detailing, however, could not get around the pipe’s underlying visual issue, that the bowl was too small for the shank.  And this was an f-stop problem, because I couldn’t “add more bowl” and the shank could not be made smaller without removing and almost certainly destroying the original valuable silver band.  In the end, I opted for a two-pronged approach – Giving the shank a VERY subtle taper inwards as it moved from band to bowl, and giving the bowl a beveled front edge.  That seemed potentially risky as it was removing mass from an already-too-small bowl, BUT… that mass was rounded and clumsy and adding some edges and detail would, I hoped, give the bowl enough extra visual weight and detail that it would offset the lost mass.  And voila: 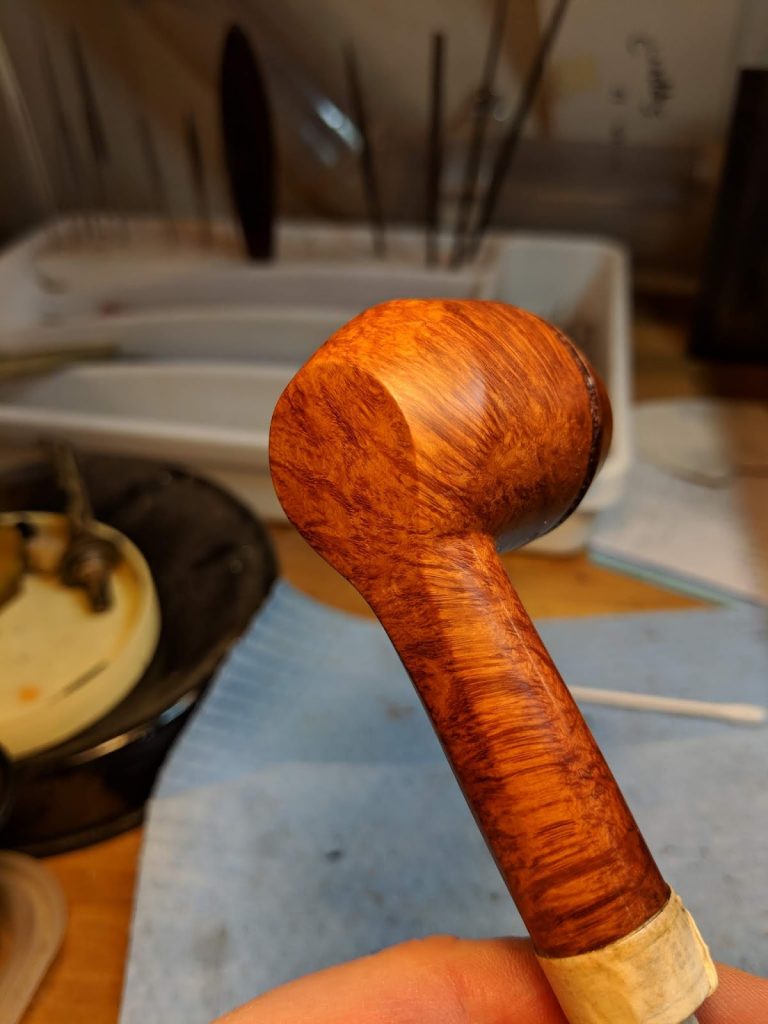 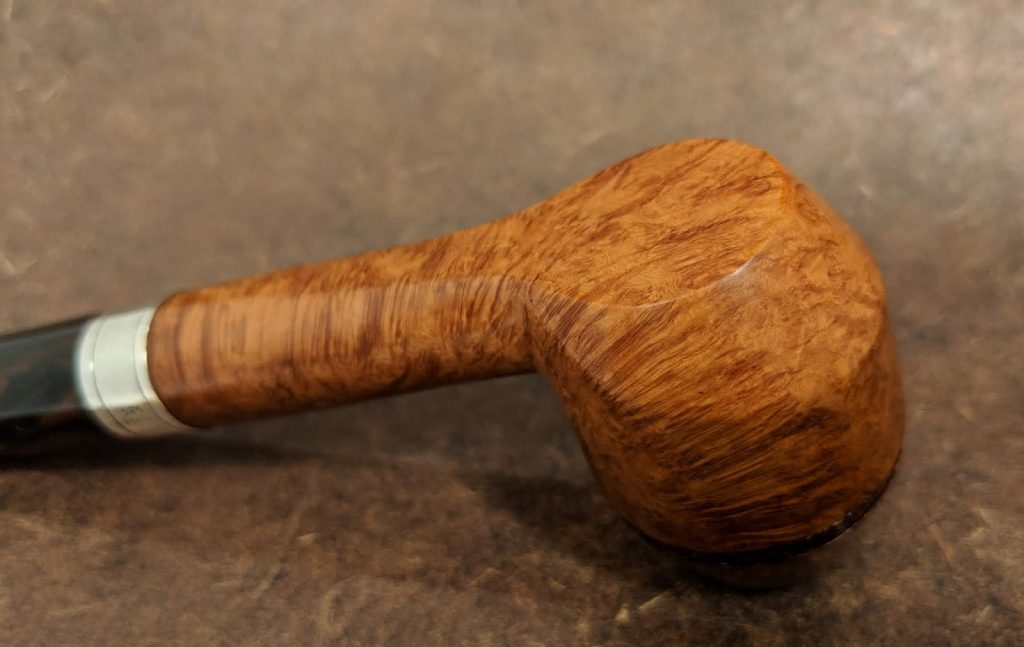 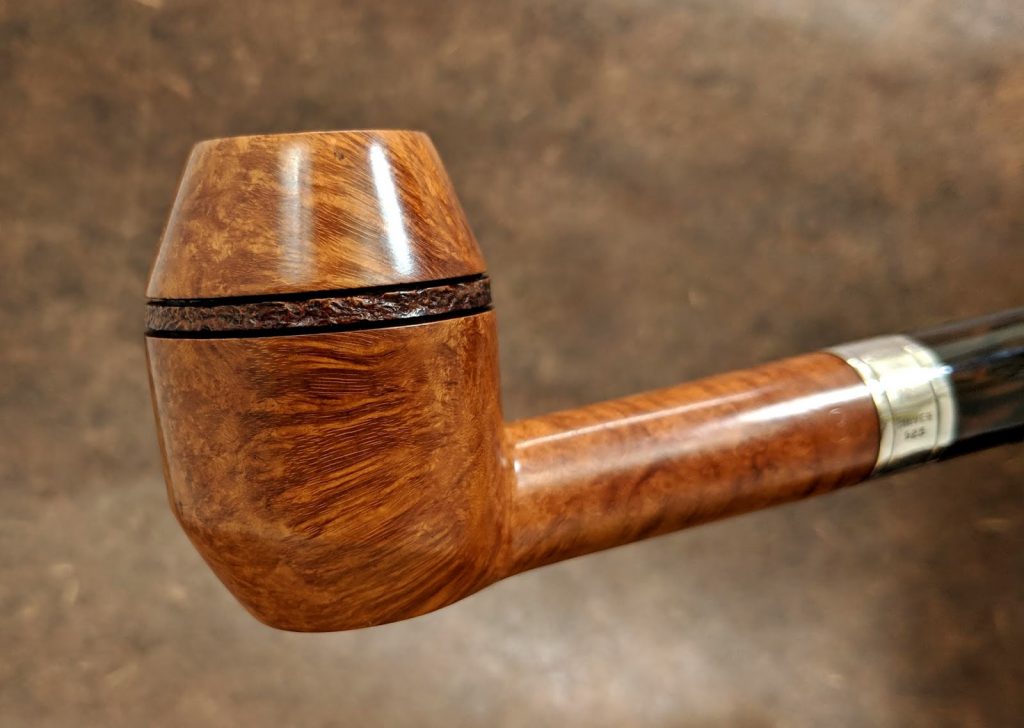 “You can’t make a silk purse out of a sow’s ear” – It’s a truth of life.  But, if you try hard and think about it a lot and put way more work into it than it deserves, you can sometimes turn a lost cause into a minor win with enough stubborn determination.

The problem now is… What the heck do I DO with it?  It has far more labor time in it than it’s worth, given that in the end it’s a 21 year old 1998 estate pipe restoration.  Also, annoyingly, I have gotten very fond of the thing.  It was a hard fought project both originally and in its “v2.0” recreation, and I can’t help but think it would be an excellent pipe to add to my own collection.  I have little enough of my own work as it is, so maybe…