Very recently, I’ve gotten my hands on a small treasure trove of my older work which I’ll be cleaning up and selling in order to raise funds to help pay for my wife’s cancer surgery.  It’s been a fascinating trip down memory lane, particularly in regard to the oldest pipes of the bunch (I’ve got the first two pipes here that I ever sold!).  A few of these are even unsmoked after all these years, so it should be a nice selection of goodies for any avid Talbert collectors out there as I gradually get the pipes photographed and posted.

It has brought me up against one annoyance, though, which every artisan can relate to – The chance to look back in up-close dismay at the amateurishness in some of the early work.  In my defense, the late 90’s were a different universe from today in terms of pipemaking.  No YouTube How-To videos, no Pipemakers’ Forum, no thousands of websites showing step-by-step processes, and no custom makers of pipemaking tooling either.  Everything that I was doing, I had to figure out for myself, as there was no pile of YouTube tutorial videos telling me how to make a turned brass shank end cap.

In some ways I think this was good, as the profusion of pipemaking help available today has led to a certain sameness in output, in my opinion… Everyone is following the same process steps, aiming at the same goals, and producing very similar results.  But it also produced a lot of learning-by-breaking and learning-by-screwingup.

A case in point – The 1999 Talbert Briar Yule Pipes.  This was actually the second Yule Pipe set I’d done after a little three pipe foray in ’98, but this was a big first for me in lots of ways.  It was the first time I’d tackled doing a matching ten pipe set of the same shape and it was the first time I’d used brass rod (I drilled out and turned solid rod to make the shank end bands for each pipe).

I’ve got three of these ’99 Yules here to sell, but looking at them, I’m choosing to fix a few issues they have to “modernize” them a bit.  To wit: 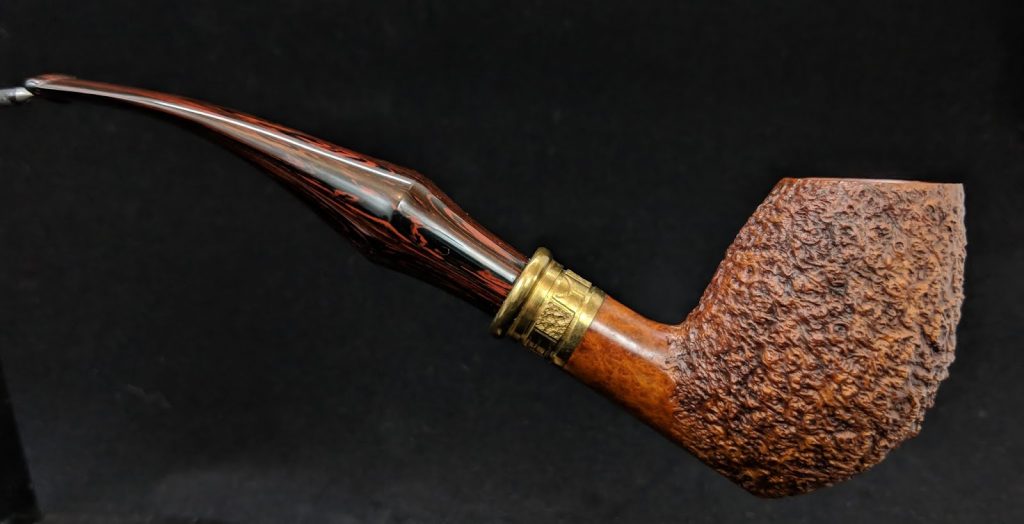 Above is an as-yet un-improved ’99 Yule.  I look at it now and am immediately thinking, “Wow, the stem’s too fat, it needs to lose a lot of weight in the middle and that ring section needs to be moved closer in to the shank, and re-turned to better echo the brass ring, because right now it doesn’t stylistically match at all.”

A little work later, and I’ve tweaked the stem on another one like so:

Purists, I suspect, will be horrified by this altering of past work and I’ll probably be getting a few emails fussing over how much better the original looked, even though it didn’t.  The revised version removes that awkward visual bulge where the stem was fatter than the shank ring, and retunes the stem’s ring to be a much better match for the brass ring.

More important than the visual are some functional improvements.  Back in ’99, I was doing very simple bit slots (All of that stuff about, “You MUST have a deep V slot, blah blah blah” that’s considered so important today… NONE of that was given any credence back then).  I really wanted to improve this part of the pipes so I’ve been widening the bit slot and carrying the V down into the stem to make for much easier pipecleaner passage.  You can see the difference below, with an unmodified ’99 Yule stem on the left and a newly-modified ’99 Yule stem on the right: 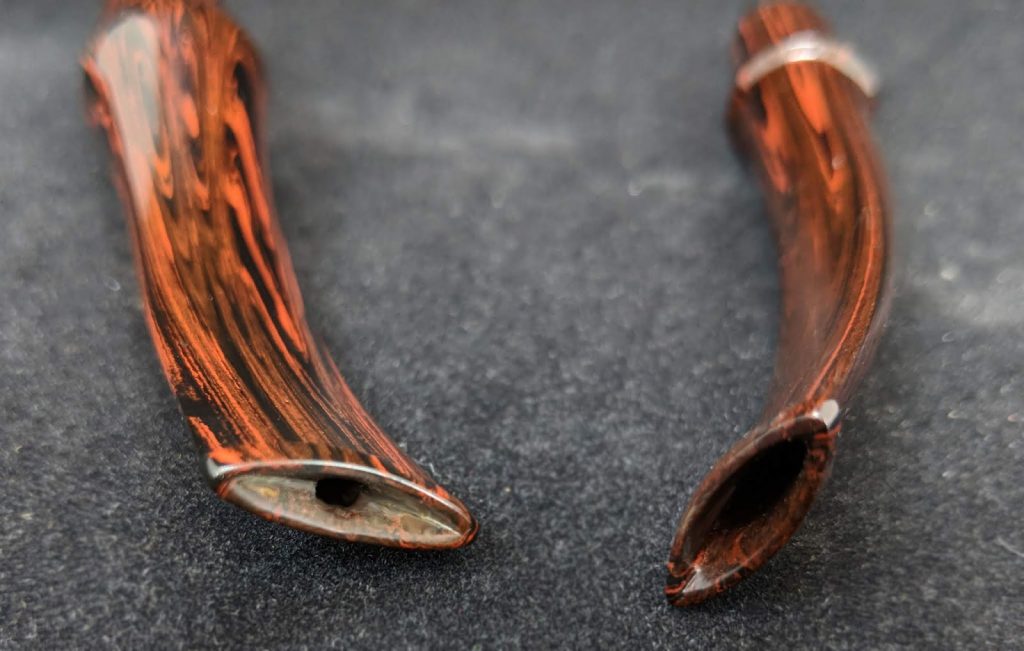 I don’t plan on drastically altering the shaping of any of these older pipes, but I do feel that some functional visual and internal improving is well worth it, much like all the guys that buy old GTOs and immediately fit them with four wheel disc brakes!