I thought I might talk about the rules that individual pipemakers work by, in terms of form vs function.  I’ve seen a lot of beautifully sculptural pipe shapes in the past few years, and I love the looks of them and admire their originality and would make similar work myself, except… I always remind myself at the start of the workday that I am, ultimately, making a functional object, not a shelf sculpture.  It has to smoke, and it has to smoke well.

A big part of that “smoking well” is down to the layout of the airhole, and how smoothly the smoke can travel from bowl to bit.  Have a look at some examples: 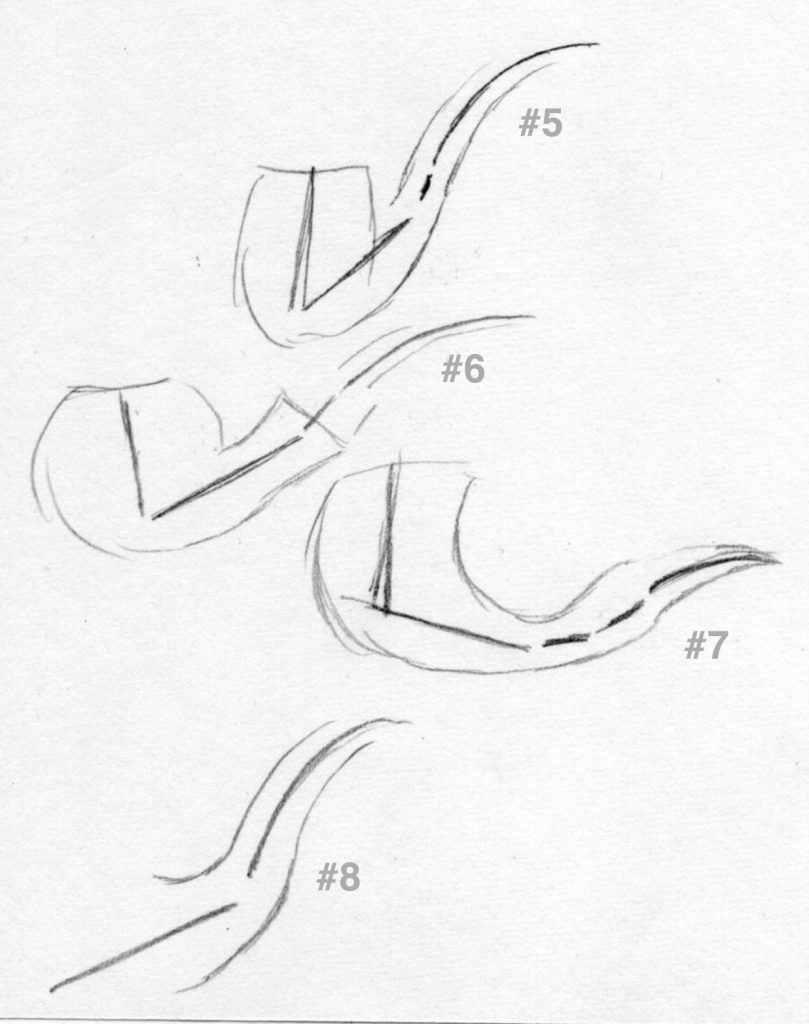 What you’re seeing above, in cross-section, are a few examples of airhole layouts.  #5 at the top is the typical full-bent style, with an airhole that curves through the stem and then diverges at an angle from mortise to bowl.  #7 is an example of a more difficult shape, but still do-able – You have a curved airhole through the stem coming down to meet a small angle in the shank extension section meeting another angle at the tenon meeting another angle as the airhole bends back up towards the bowl.  Tricky, but it will still pass a cleaner.  #8 is an example of the sort of sharp angle that starts to become an issue.  The more that bend increases, the more likely a pipecleaner won’t pass, even if the drilling is centered.  Also, the more it’s likely to gurgle.

Back in my former life in HVAC, I had a decent education in duct systems.  The focus there is on consistent air movement, low noise, and smooth flow.  When I got into pipemaking, I applied a lot of these basic principles to my pipes, using what were at the time radical ideas like conical drillbits for stems to ease the resistance as the airhole flattened and widened toward the bit, as well as being a big proponent of the open draw.  The simple principle there is, the more complex the air passage is, the bigger the airhole needs to be to allow smooth flow.

One trend that bugs me is the use of connecting airholes drilled at different angles and plugged to hide this fact.  Basically, you have an angle that’s impossible for a straight drillbit, created using either a curved drillbit or two straight drills that form a bend.  It allows the creation of some stunningly sculpted pipes and I certainly envy the beauty of the results, but… I won’t do that.  Why?  The minute that one uses a curved drilling or multiple angles in a sealed system, one has just cost the smoker the ability to ultimately clean and ream the airhole.

It’s not an immediate cost.  The pipe will probably smoke fine if the drilling is done well and the airhole is sized large enough.  The problem comes years later.  Airholes, just like bowls, accumulate cake inside with use, especially down near the bowl.  A couple years of regular use can reduce a 5/32″ opening to a 9/64″ or smaller, as the inlet gradually closes down.  That’s why it’s necessary to have a selection of long drill bits on hand for longterm maintenance, to enable the owner to push it through to the bowl and manually ream the airhole back to original size.  And that’s why I don’t do tricky airhole drillings, because… Full stop.  They can’t be reamed.

This is a perspective born of a couple decades of carving.  Wild shapes are seductive to new carvers, because they grab attention easily and have a powerful, “Hey, WOW, look at that artist!” Instagram/Twitter/Tumblr appeal for their visuals, but be careful – Some of those amazing shapes can come with some pretty annoying compromises, and they may not even become apparent till a few years down the road.