This is going to be a long post, but I’ll try to keep the words to a minimum and let the photos do most of the talking.  Basically, this is how I make a freehand, and when I say “freehand”, I mean a pipe with no advance planning as far as style goes.  The internal drilling is carefully plotted and it has a straight airhole connecting to a centered bowl chamber bottom, but as far as the shape went, I simply selected a plateau block with an unusual grain arrangement and decided to let the grain shape the pipe.  It’s the antithesis of the working style that involves sitting down with graph paper and protractors and designing every detail of the pipe’s shape beforehand.  Some guys are excellent at that, but I dislike working that way because it feels too mechanical for me.  On the other hand, working “without a net”, so to speak, requires a LOT of courage and hope and the willingness to take crazy chances.  Both schools of design have their advantages and disadvantages.

Here you can see the total preplanning that was involved with this pipe.  Drilling angles, and a very basic idea of the shape size:

The initial shaping work defined the basic form along the flow of the grain.  It became obvious that the huge bird’s-eye display across the front would be the centerpiece of the pipe. 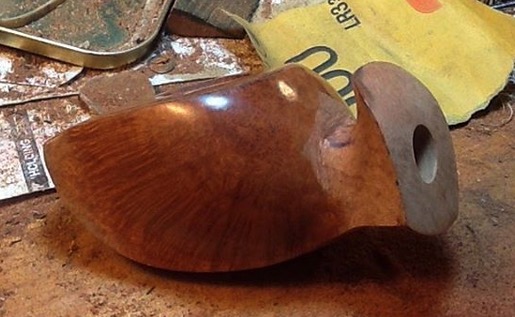 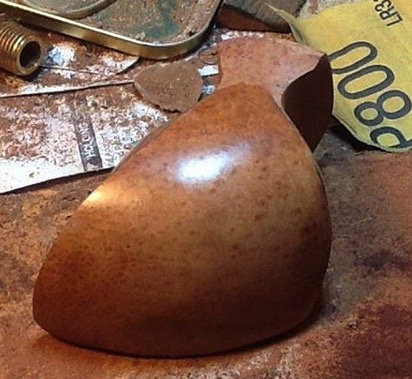 The main surfaces are sanded smooth in the above photos to give me the most accurate idea of what the grain was going to look like, that I could then start fine-tuning the shape around the grain.  Also, it made a handy test to determine the level of flawlessness of the wood – If there were likely to be sandpits that would make the pipe a sandblast, they’d probably have shown up on those big smooth sections.

Next up was the stem.  I always work on the stem in tandem with the pipe so I can keep the two in visual balance with each other, as regards size and heft, and also match curves and lines.  Below you can see a smaller stem reject that I’m using as an initial model for this pipe’s stem, which is handcut from German cumberland rod. 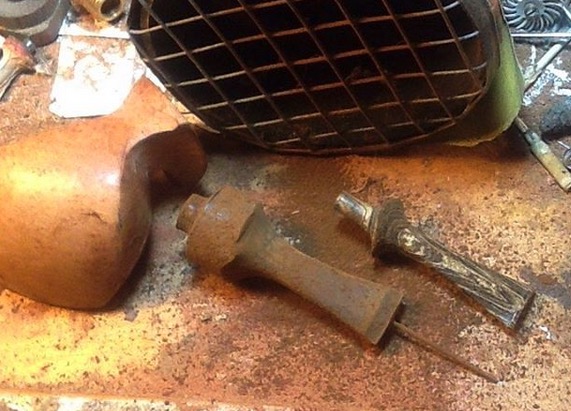 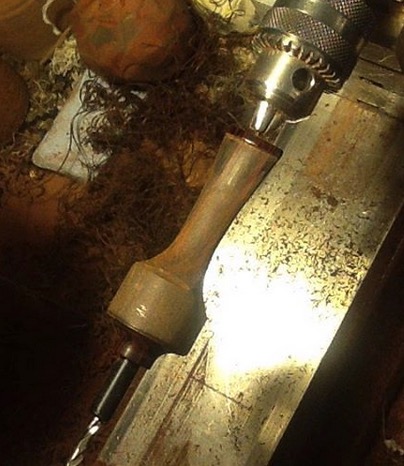 It’s funny how my Taig lathe has become my favorite stem filing mount.  Takes all the strain off the wrists from holding the things by hand.  With a drill bit in each end, I can freely rotate the stem and compare the bit thickness to the size of the bit airhole, to get it thin without making it dangerously so.

Now you can see the pipe starting to come together.  The bit work is finished, leaving the body of the stem to be shaped to match the pipe.  The main shape of the bowl is now established along the lines of the grain flow, allowing the grain itself to determine the lines of the center curve that defines the pipe from front to back. 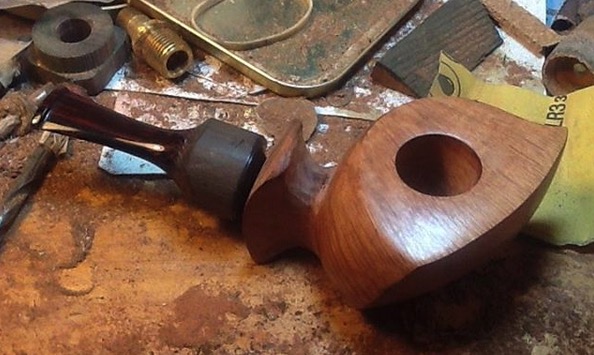 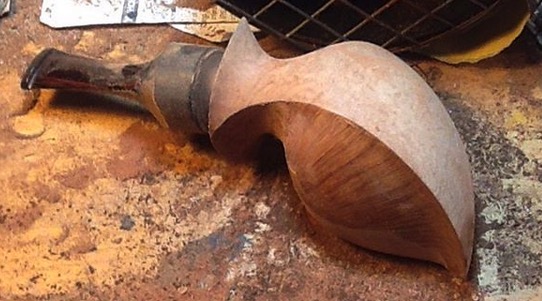 It was still looking too chunky for me, though, so work from this point focused on tightening the base of the pipe inward – Still keeping to the arc of the grain, but emphasizing the strong heart-shape of the bowl via a more pointed bottom.

The bottom has been tightened inwards and the curves are more accentuated.  Now begins the stage of making the stem’s freehand shape work with the pipe body.  Since it’s a cumberland stem, it has “grain” of its own that needs to be considered and worked with, as well.  After some initial sketching of a couple of different ideas, I decide to go with a three-ringed approach using rings of diminishing size, with the nearest ring mirroring the curve of the shank end and the smaller ring curving in the opposite direction, giving a jaunty “flip” to the eye as it flares away from the bowl. 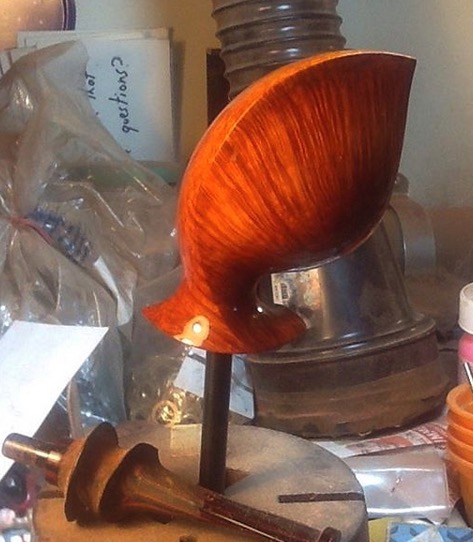 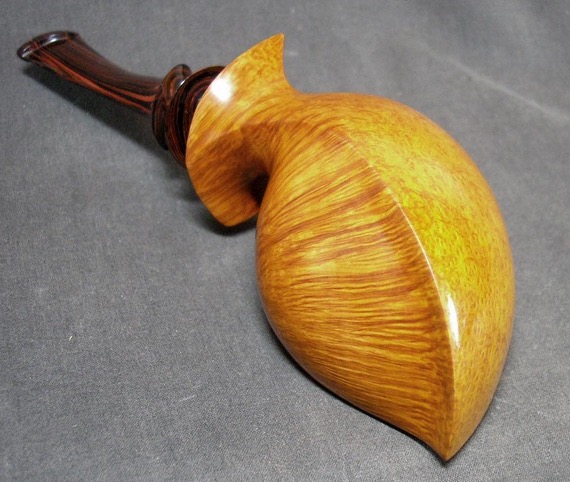 Once the basic shape of the stem rings was established and rough-carved, the bowl goes through a couple of processes to improve its initial smoking flavor, and is colored with a penetrating stain tint mixed with oil.  While that’s drying, I work on finishing the stem in fine detail.  Once the pipe has received its final fine-sanding and polishing, it’s finished!  What began as a block of wood is now a piece of sensually curving, smokeable craftsmanship.

And that, above, is the “Making Of” part of my post.  This next bit is the “Why”, where I’ll attempt to explain a lot of the specific details of the shape and why they were done the way they were done.  This gets into the nature of how the eye sees lines and curves, but I’ll try not to get too esoteric.

First up, I mentioned shaping the pipe around the grain.  This applies to a lot of the pipe that may not be initially obvious… such as the top arc line of the shank flare.  It wasn’t chosen randomly.  When one looks down the length of the pipe, the arc of the shank’s flat top edge follows the arcing curvature of the grain on the bowl: 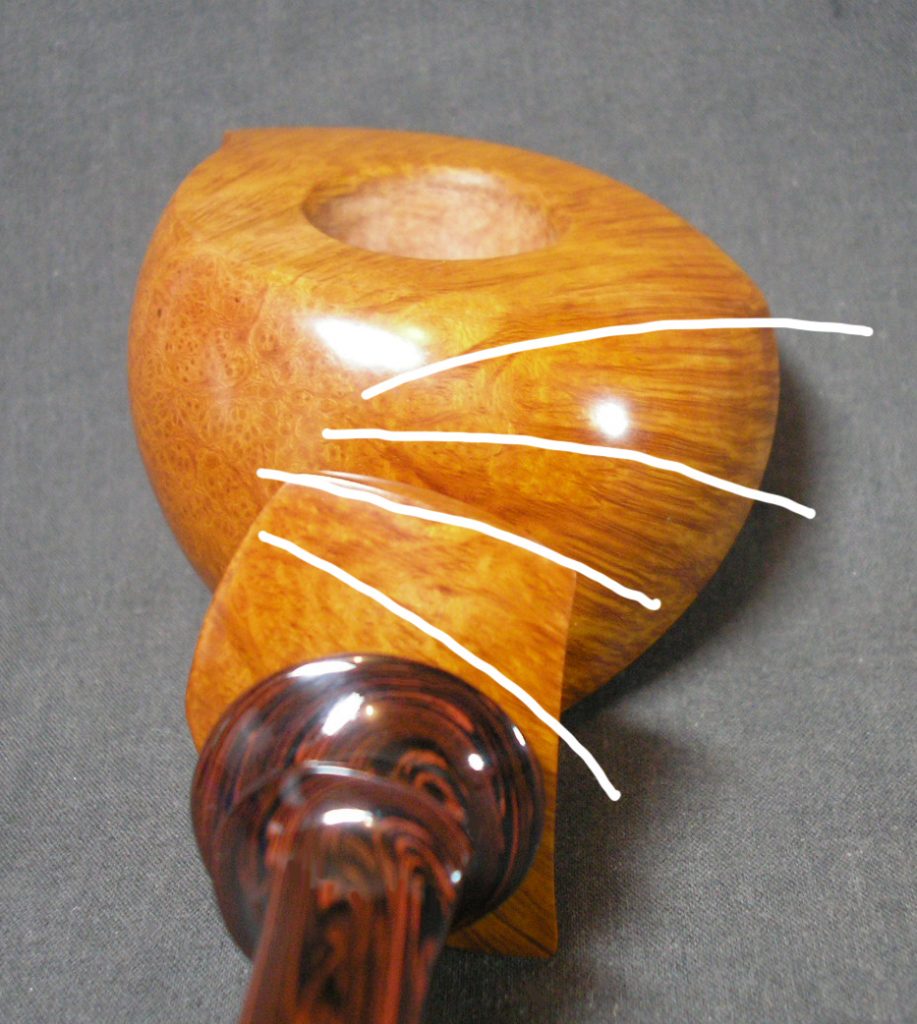 Note that the curved swirl of the cumberland flows in the same direction.

It’s not the only curve that matches, though.  The flat plane at the top of the shank mirrors the flat plane across the bowl top.  Moreover, the two stem rings are shaped differently for a reason – The larger one creates a visual echo of the bowl’s round body curves: 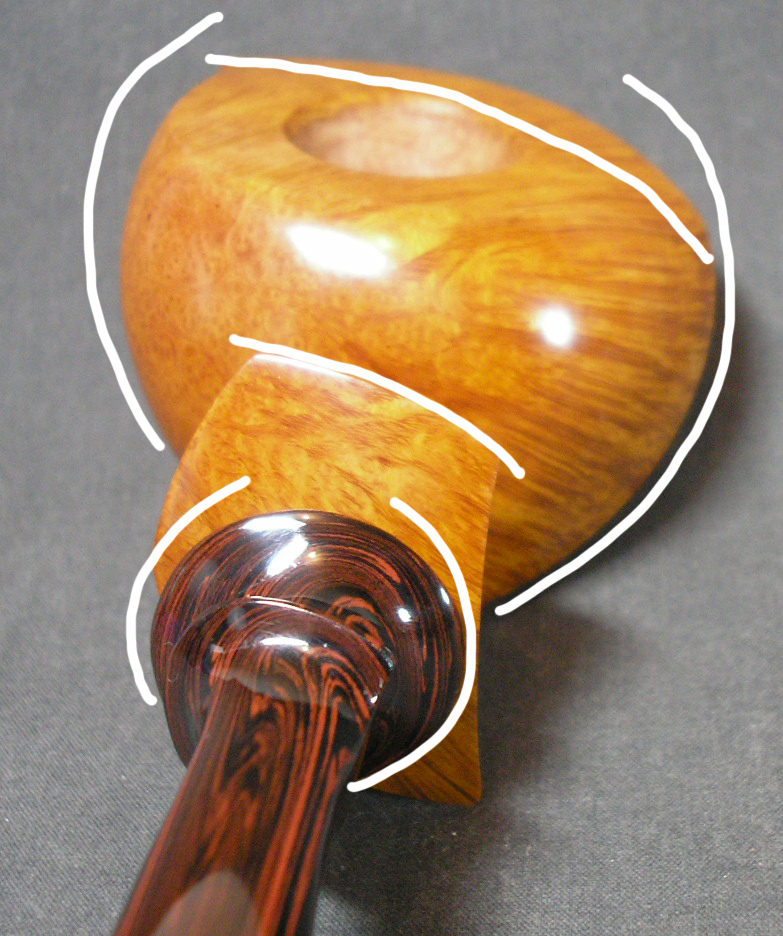 The smaller stem ring, by contrast, is cut into a teardrop form that echoes the teardrop shape of the end of the shank: 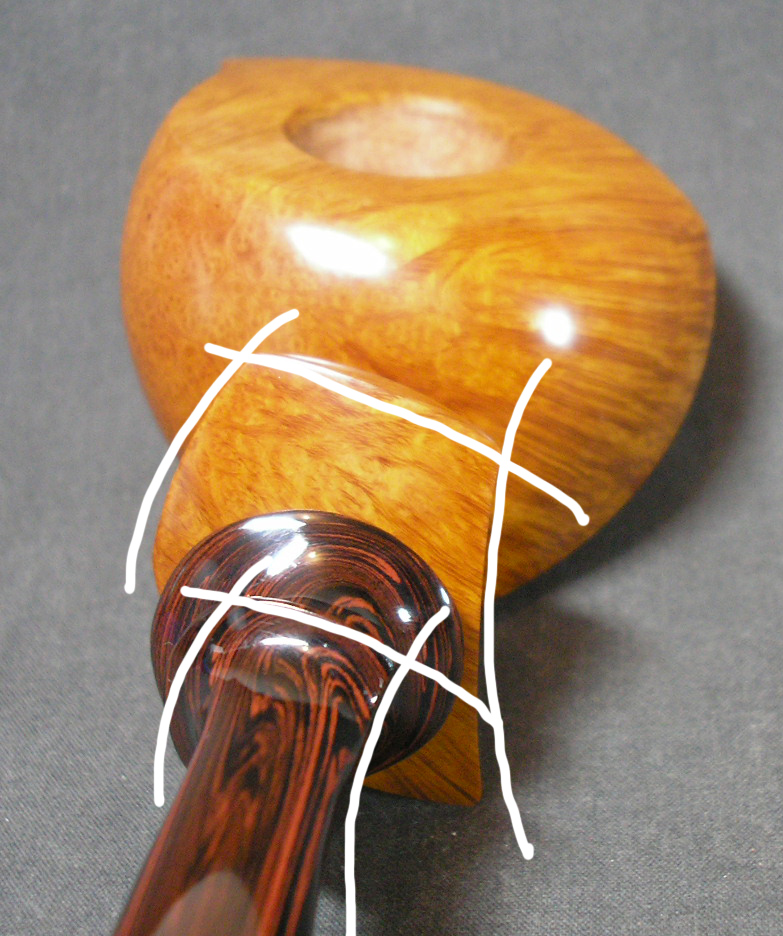 Some of that is probably hard to make out in the photo.  Oh, for a better macro lens!   Even the top edge of the smaller stem ring has a gentle flattened curve to it that calls to the shank’s top.

The other area of visual excitement that I wanted was in the shank & stem profile.  Why excitement?  The human eye loves matching curves – One of my art professors once stated bluntly, “The more your design reminds someone of a nude woman, the more beautiful people will find it.”  While round shapes look nice in echo of each other, lines do best either converging or mirroring in opposition.  I could have made the stem lines copy the shank, but it wouldn’t have been nearly as dramatic as this opposing curve (There’s an edge there in the cumberland, which tends to look invisible in the photos due to the cumberland grain): 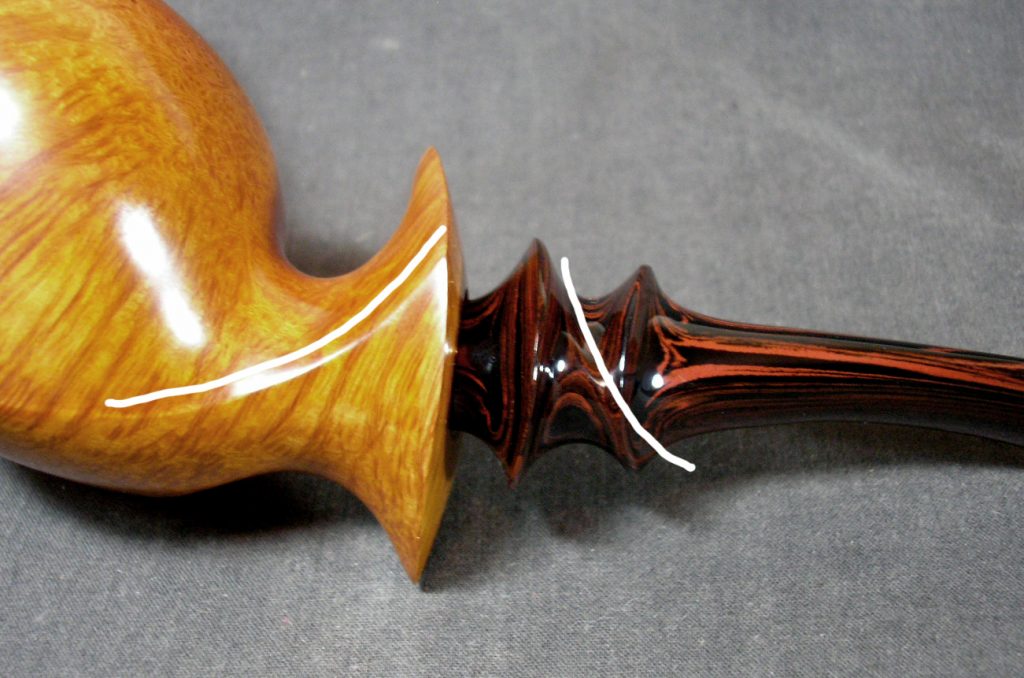 More curves playfully flip in opposing directions between shank and stem, giving the pipe a sense of dance, almost – Two in harmony, one in opposition: 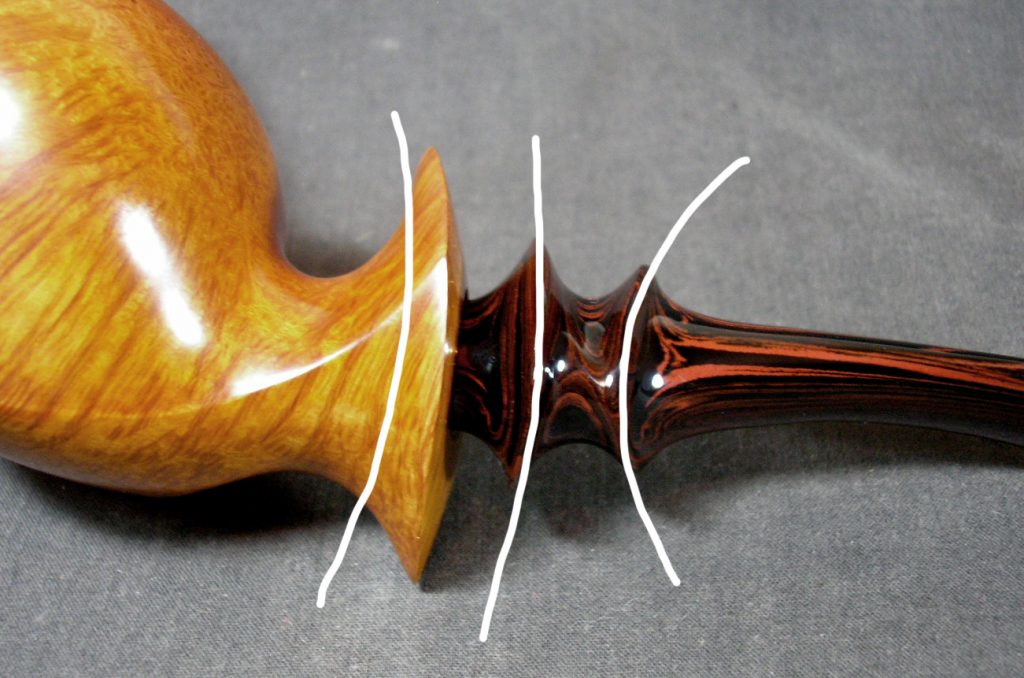 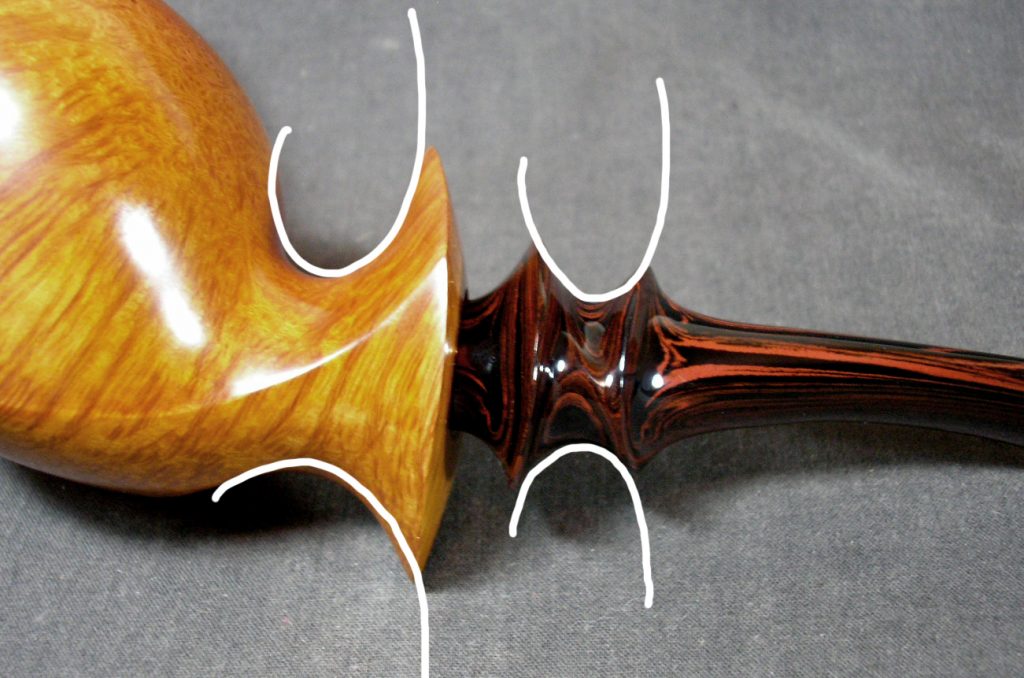 In that respect, the dual-ring design of the stem shape becomes a smaller mirror of the relationship between bowl and shank flare.

And, in a nutshell, that’s how I look at pipe design.