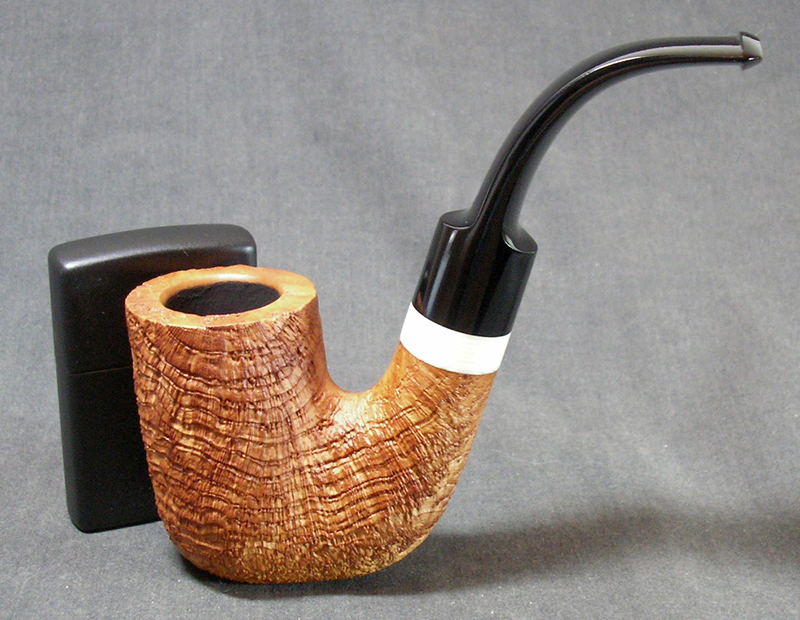 Whoah.  I just discovered to my surprise that I haven’t written a pipe blog article since February of 2015, when I introduced the Morta Collectors.  I haven’t exactly been active with this blog for a few years now, but that’s quite a gap between posting, even for me.  By way of explanation, I’ll just say that our year of 2015 went downhill sharply after that last post… My wife’s parents were in the hospital several times, there were various crises happening, and it seemed as though every mechanical tool we owned broke down in some catastrophic way.  As I write this, we’re still missing use of our air cleaner (down from a dead control board), our inherited station wagon (down from head gasket death), down one computer monitor that needs replacing, and still in need of a pressure regulator for the sandblasting cabinet since the old one packed up around November.  Still, I’m not going to sit around whining about this stuff, because it’s time to move onwards and upwards!

Ligne Bretagne
Last year saw us focusing most of our production on Ligne Bretagnes, largely for the rather sad reason that my attention was just diverted to too many family health crises to really focus on making Talbert Briars properly.  It all made me very thankful to have Ligne Bretagne, though, as a reliable source of income that could adapt better to the crazed “Work one day and run to the hospital the next” style of workweek that characterized 2015.

The biggest trend I watched in 2015 was seeing nearly every other artisan maker create their own brand of factory-made pipes, essentially flooding the market with $100-ish factory pipes in a race to the bottom on pricing.  Most of what I’ve seen is not sustainable pricing-wise, based on my own experience with Ligne Bretagne, and I think after a year or two a great number of these fellows are going to find out just how much money they’re losing with a lot of the prices I’ve seen.

I’ve given the situation some thought and opted to do the opposite of what “the crowd” is doing and take our Ligne Bretagne brand a wee step upmarket.  Prices aren’t going to jump into the stratosphere or anything, the increases will be minimal, but my goal is to put more work and individual attention into each and every pipe.  I’m going to leave it to the factories to stamp out a hundred copies of the same shape in the same finish, and focus instead on our strong point – Individuality.  More creative finishes (Emily is now working on a carved knotwork finishing style that may end up being really striking), more individual touches to every pipe (Witness our recent increase in custom bands, rings, horn stems, etc), and overall, a greater focus on making each Ligne Bretagne a unique creation and less of the cookie-cutter type that have swamped the biz lately.

In a nutshell, there are plenty of good $100 pipes available now to choose from.  Ligne Bretagnes are going to be made for the buyers who may not have the cash for a $500 artisan brand, but do want something more unique, more unusual, and a little bit more polished than  the competition.  That’s the goal, at least – Now it’s up to the buyers to tell us if we hit it or not!

Talbert Briars
2015 only saw five Talbert Briars made.  Five, for an entire year.  As I write this, we still have one of them available, as well.  Should anything I’ve made ever become collectible, 2015 Talbert Briars are going to be one of the rarest pipe stampings on the planet!  As I mentioned above, I simply didn’t have the time or the focus to make a lot of Talberts last year, but I hope to rectify that in 2016.  I’ve got a great number of sketches and designs piled up, and a lot of creative shapes I want to try… All I really need is a bit of breathing room to relax and focus on them.  Talbert Briars have never been a 75-pipes-a-year artisan brand (Usually I’m doing good to make 40-50), but they will always remain our flagship line that represents the best of our best, and I do hope I’ll be able to put a few more of them onto the website in the next twelve months.

A number of folks have bemoaned the sad silence of my web comic, Giant Radioactive Lizards eloquently discuss Collectible Tobacco Pipes.  It went dormant due to the circumstances mentioned above – It’s hard to get inspired to make a funny web comic about giant monsters arguing over Dunhills, when you’ve spent every third day of the year worrying that a family member is going to die, or is in terrible health.  They WILL be back, however, as soon as opportunity allows.  That’s a promise! 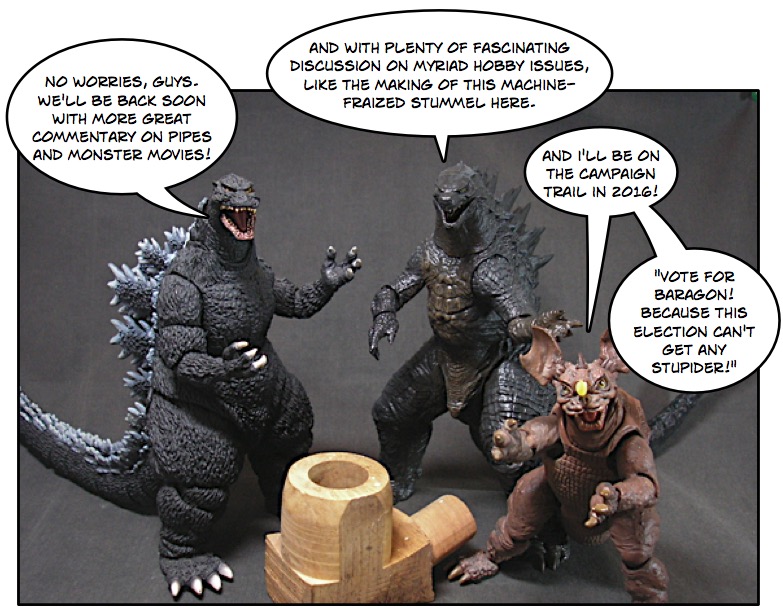