Making one-of-a-kind pipes is not like designing repeatable shapes, where the design time is spread over many iterations and paid back piecemeal.  With a one-of-a-kind, the design cost is a direct part of the total cost, and sometimes it can be a large chunk of the total creation time.  I thought it might be interesting to write a post chronicling my entire experience of designing the latest Halloween pipe, from the initial commitment to the project to the final creation. 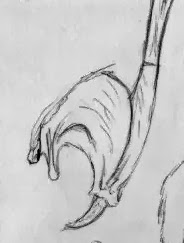 I started off with some very general sketches of a wide variety of subjects, but kept coming back to this sort of bowl shape.  I fiddled around with this idea and produced the sketch at left, which was ok but not really what I wanted – It was much more Goblin than Talbert Halloween, at least as I wanted this year’s run to be, and ultimately it became a new Goblin after various tweaks and changes.  My problem with it was that it looked too overt and horror movie-ish, and my aim this year has been to make a set of Halloween pipes that were both surreal AND intense without resorting to the obvious prior tropes of claws, teeth, etc.  So, while I liked this look, it got rejected, and I moved on to other ideas… 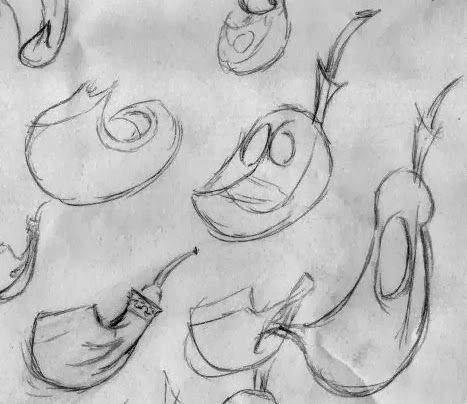 There followed a period of creative frustration as I sketched out idea after idea, playing with all sorts of curves and organic shapes as I searched for something that looked “right”… when I wasn’t sure even what I wanted, just that I’d know it when I saw it.  None of the above were “it”, though I like a couple of them, particularly the lower right design, above, a weird combination of slug and scorpion. 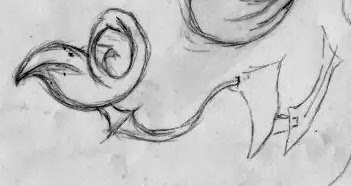 I started thinking about layouts that were further from the traditional pipe design, and sketched out the pipe to the left, above.  It’s a cool looking thing though it would have some basic problems, like weight distribution and leakage around the stem from condensate flowing down… Still, an intriguing idea I may revisit someday.  But it wasn’t until I did the quick sketch of a Cavalier-style pipe, above right, that I suddenly said, “Yes, that’s it.” 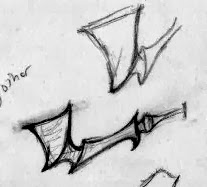 But, of course, that wasn’t “it”, at least not yet – That was just the first step in pinning down what I wanted.  I had a basic bowl and shank idea and I ran with it in more sketches, thinking in terms of a sort of “alien bone” look, with an elongated thin shank section and some sort of Calabash-style bowl perched at the end.  I loved the design, but already I had a nagging at the back of my mind telling me this was going to be much harder to pull off than it might initially look… 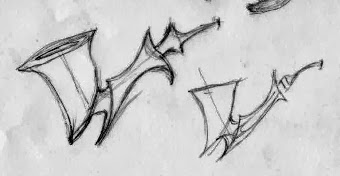 This is a classic case of one of the main Pipemaker Problems – The imagination gets ahead of the function.  I love the above designs, but they have all kinds of issues.  The excessively long pointy bits would be fragile as hell, and prone to breakage.  The airhole couldn’t connect from mortise to bowl.  The very curves that I liked played hell with the drilling angles internally.  I did, however, really love the “Mad Scientist” feel of the design, and kept at it.

…BUT, not to the exclusion of other ideas.  It’s important not to get too fixated on one concept, especially one loaded with problems to surmount, so I sketched some other, similar themes as well: 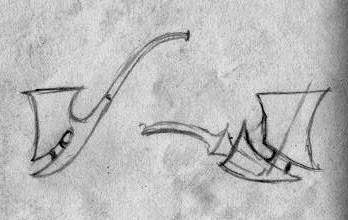 The pipe on the right was a nice, straightforward expansion chamber design, but too simple, I thought, for a Halloween pipe – This was something for a regular Talbert Pipes stamp, perhaps a Signature piece but not a Halloween pipe.  The one on the left, by contrast, looked plenty “Mad Scientist” but had drilling issues of its own, plus the potential hell of having to make a handcut churchwarden stem.  99% of all churchwarden stems you see on the market are molded, and here’s why – Making a handcut churchwarden stem from rod stock is nastily expensive, for one, as it will take up the material of at least three normal stems.  It’s also hard-to-impossible to drill depending on length, because most lathe beds used by small shops aren’t long enough to accommodate a long rod section and the extended length drill bit needed to drill the airhole.  All that unsupported length wants to flop when spun and I don’t have a lathe support for long stock.  Then you have to shape and file the damn thing, which is 3X the work of any normal length stem plus the additional hell of making sure the full length is perfectly smooth linearly and not ripply or fluctuating in thickness.  It’s a major pain. 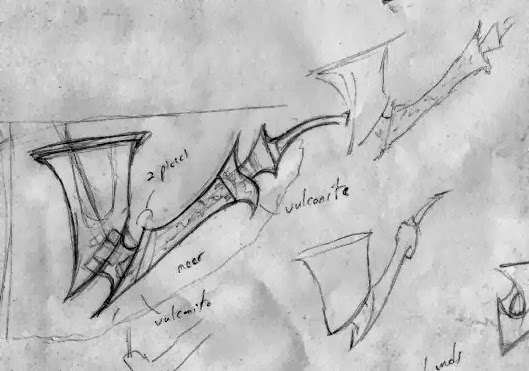 The problem was, my preferred idea was rife with issues too.  The proportions of the design were going to require a HUGE briar block (seen in the faint outline) to allow the shape, and even with an extra-large block, the eventual pipe would seem a bit small – The two deciding factors were the top-to-tip distance from bowl rim to bottom point, and the point-to-point length of the shank section.  That’s a lot of briar.  Ultimately unsatisfied with the shorter bowl heights possible, I looked into making it a component pipe of many pieces.  In the sketch above, you can see some of my notes where I debated making the bowl-only from briar, and then fitting it via some sort of joiner to a shank section made from briar or meerschaum.  I kept turning over material combinations and it kept getting more and more ridiculously complex, but none of the ideas I had got me around the fundamental problem of the layout, which was the expansion chamber.  Since the bowl airhole and stem couldn’t directly connect, it would need to be an expansion chamber design, which meant a large open shank section… completely at odds with the design’s thin and delicate shank.  The inward curvature of the shank meant a long, narrow expansion area and hard limits on how much “recurve” I could give the profile lines.

The above-right sketch came first.  What if the shank were compressed?  That is, use the much-obsessed-over design but “squish” the shank inward, making it fatter instead of long and fragile.  I liked the first sketch but it needed refinement, which it got in the above-left drawing.  When I looked at that, I knew it was “it” – Something that looked appropriately “Mad Scientist-Insane” without resorting to fangs and skulls, yet was also a solidly practical layout with a large shank for the expansion chamber, good weight distribution, and compact proportions that would let me get a large bowl out of a single block of briar, making the thing all of one block.

I had a couple of minor changes – The stem was too large for any available rod stock diameter, and furthermore not even workable due to the curves I wanted in the shank section.  I ditched the idea of a shank ring on grounds that the strength of the design was in the profile, and too many extraneous details would overcomplicate it fast.  That led to the working layout below. 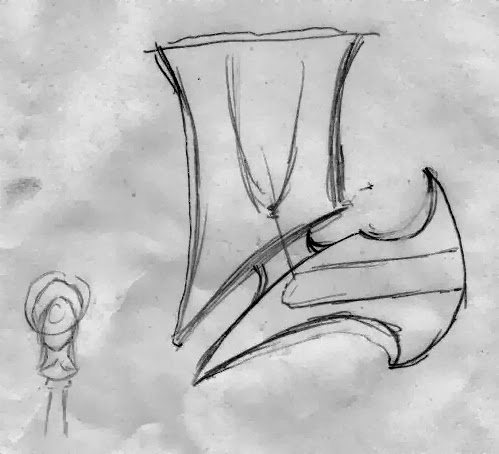 The bowl is a deep conical design with a centered airhole going down at an angle to open into the shank’s expansion chamber.  The chamber still needed to be narrower to accommodate the deep top and underside curves of the design, but it would be quite deep.  The stem’s tenon would socket into the expansion chamber drilling, with a larger cutout for the wider body of the stem itself.  To the lower left you can see a crude top-down sketch – Always draw any design from multiple angles to see if it’s going to have any major awkward elements that will hurt the theme.  I was finally happy – It solved every issue of the original “Version 1.0”, with thicker “pointy bits” (and thus more durable), as well as a bigger chamber, a taller bowl, and a somewhat more aggressive stance.

And that’s how I got to this! 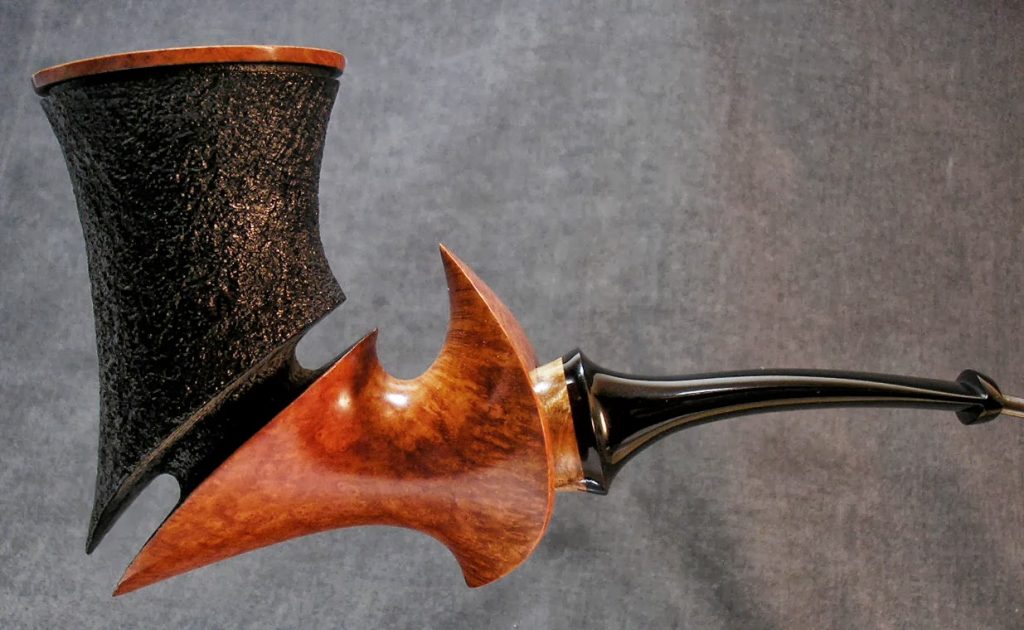