I do a lot of very varied work in pipes – It helps keep me sane and enthused about what I’m doing, which can get a bit repetitive when you’ve been doing it this many years.  The divergent ways that I will approach a project are as fundamentally different as the projects themselves, and I thought I’d write a little on the subject.  For starters, the first question I ask myself is, “Is this going to be a composition or a performance?”  I speak of this in the musical context and for me it is the key difference between whether I’m working on an original design of my own, or on an interpretation of a known classical shape.
Creating an original shape is, in essence, composing a piece of music – You’ve got as blank sheet and work from them, arranging elements in ways that tickle your fancy.  When working from an existing design, however, as with the two pipes I’m using as examples below, I liken the creation experience more to a public performance of an existing composition.  You have the music sheet already, you know what the melody is, you know what parts to put where, and it’s all down to your own skill and personal interpretation as to how the playbook will be rendered for the audience.
This is the point where you have to make the interpretation your own, to make this specific individual performance something unique and distinct.  For example, have a look at this bent billiard I’ve just completed:

I went in with the intent to make something simple and elegant – The classical bent billiard – a shape straight out of the “Ceci n’est pas une pipe” painting.  It sounds like one might be locked in, but that’s far from the case – There’s actually a great deal of leeway for personal expression in the minute details of such a design.  One of the most obvious is in curvature, especially shank and stem curvature.

If I were to try and list my own distinct “Talbert” hallmarks in design, one of the tops would be a freedom of flow from shank to stem to bit… Smooth curving lines that arc elegantly, without “humps” and sudden jarring curve changes from shank to stem.  In silhouette, it should look like one single piece of material that’s unfurling, without a clearcut deviation between stem and shank… unless that is the specific desire.  Again, it’s a matter of performance and mood, like an evening concert.  It can be hypnotic and melodic, it can be hard and sharp, it can be raucous, it can be upbeat, it can be downbeat, and all of these renditions can be drawn from the same basic musical composition (or in our case, shape library). 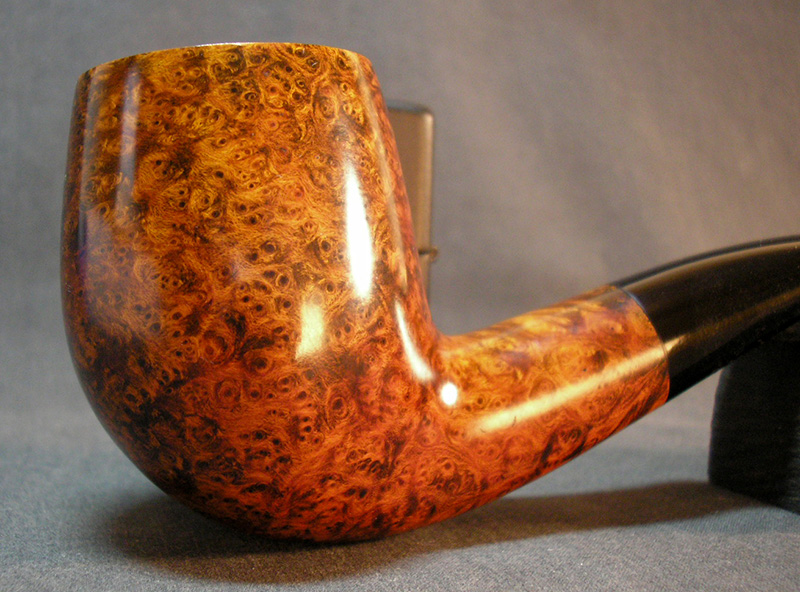 For this piece, smooth elegance was the concept, to the point of being nearly sensual.  On other pipes I might have gone for a tighter join of shank to bowl, but here, that was the opposite of what I was after – I wanted the bowl mass to transition smoothly from the thickest part of the bowl to the shank in a way that let the weight visually shift backward… One organic, unified piece of polished wood instead of distinct parts fitted together.  I did not want the fingers to rest on an edge, anywhere on the pipe.

(For contrast, check out this recent bulldog, which is all about hard edges – Everything in it is beveled, planed, and tight of line.  It’s a brass ensemble to the billiard’s soft woodwind.) 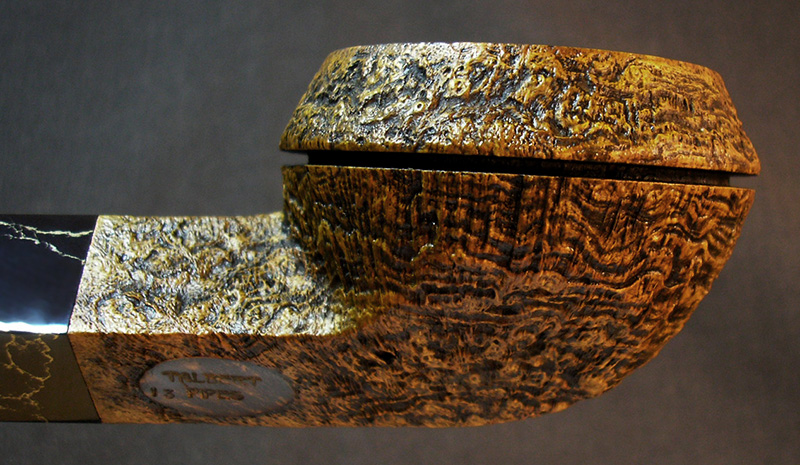 It’s through the small touches like this, as well as finishes, that one maker defines his own aesthetic from another.  While some might think that doing a classical shape would represent being “roped in” or limited in terms of creative expression, it can actually be quite liberating once you’re technically proficient enough to really play with the basic elements of the design.  Musically speaking, think of someone like Apocalyptica – A group of classically trained cellists who play Metallica songs.  My own version of that sort of whimsy represents itself like this: 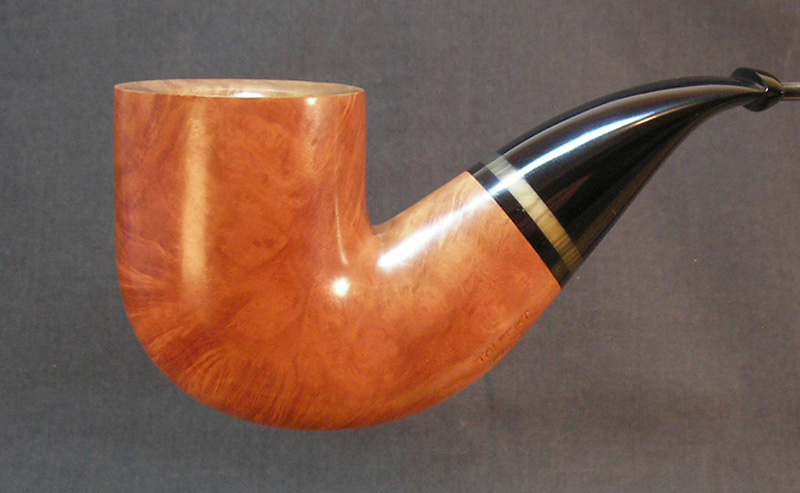 Yes, it’s a bent billiard!  In the “bones”, per se, it is essentially the same pipe as the curvy example above, and yet the multitude of small differences make it an entirely different visual and tactile experience.  Rather than sensual, I wanted its theme to be fat, chubby, and if I dare say so, jolly.  The first billiard says, “Paint me like one of your French girls.”  The second billiard chortles by the Christmas stockings.  Same maker, same functional underpinnings, but two entirely variant results with a distinct personality to each.  Moreover, as individual, handmade items, it’s a personality that can’t be replicated exactly for future pipes.

…Which is not unlike an evening’s live concert performance.  You might hear the same notes being played similarly by the same group on another occasion, but you’ll never hear that exact performance again.