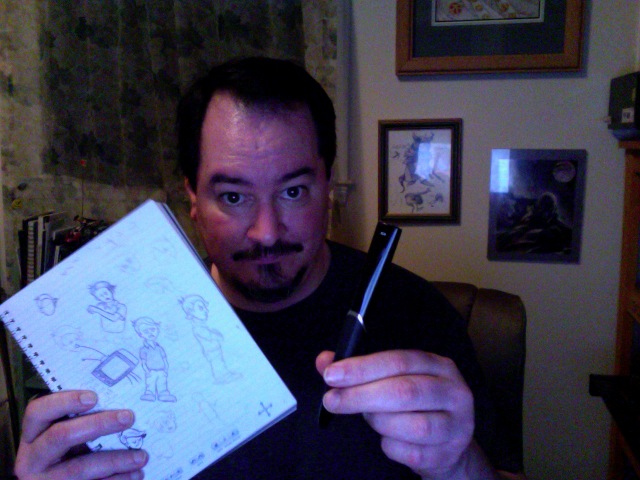 Note – This is a product review of a new toy I’m using.  If this review gets you all wildly fired up to buy one of these things, you can buy one from this link and I’ll get a few bucks of credit and you’ll get 15% off, which is nice savings on a gadget that can run $100 to $200, depending on how fancy you want it.  I was not given a free pen or anything else to shill for these folks, I just happen to think it’s a cool gadget and I needed a blog post subject this week – Ergo, a hardware review.

Over the years of writing this blog, I’ve commented on some various unusual workshop tools, and here is another one that’s fast becoming an essential part of my working process.  I don’t know how other pipemakers keep their records, but I am an inveterate scribbler – My work station is usually overflowing with small notepaper scraps that I’ve covered with pipe designs, ideas, and reference instructions for various processes.  In the past, this stuff would typically get lost or tossed out, leading me to the frustrating problem of often having to RE-figure out how to accomplish an effect that I’d already figured out a year or two previous, but hadn’t done in a while.

The first step in handling this was to create my own little “grimoire” in the Mac app Notebook.  That’s an extremely useful program that allows one to assemble piles of mixed media – Audio, video, drawing scans, text, etc – into a notebook format that can be easily annotated and added to.  I started scanning my sketches in and made a point to type up the step by step guides that I made for our workshop reference.  It worked well and I quickly assembled a fairly comprehensive “Book of Pipemaking”, a cyber-tome that includes such errata as staining guides, toolmaking tips, HTML and website info, writing ideas, design ideas, and even a blacklist of known bad seed buyers to avoid selling to.  This worked pretty well but for one flaw – My scribbling typically runs far ahead of the info that I have taken the time to enter into the notebook, so there were plenty of times I would throw something out instead of bothering to scan it and enter it.  Also, just typing out notes is time-consuming and written text doesn’t always convey the nuances and asides that I might have had at the time.

Enter the Livescribe “Echo” smartpen, a 4 gigabyte “pen” that can literally record my drawings and handwriting into itself as I scribble, and transfer that directly to the computer when plugged into a USB port.  This is freaky, especially to a guy like me who grew up when a techno-gadget was the ratcheting motorized antenna dial in the box on top of the TV that rotated your antenna between channels 2, 8, and 12.  The Echo literally “reads” my handwriting and drawing as I make it, and feeds it to the computer in the form of PDFs, PNGs, text-to-speech, or even animated videos that record the sequence of a drawing as it is done. 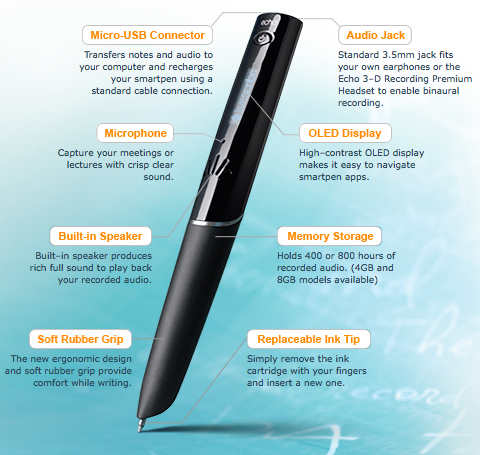 It’s every bit as freaky as it sounds.  The real advantage, for me, is that it also records audio as well as writing.  Picture this typical workshop scene – You’re sitting down planning out how to do something complicated, say a bamboo-shanked churchwarden with decorative rings at each end and a handcut stem, and you want it to be a contrast-stained bowl.  You want to get all the steps in order so you pull out this insane intelligent pen and start writing in what goes when.  As you’re writing, you can just talk, commenting on additional thoughts or ideas at each step that are too complex to write out in detail…  Talking is always faster than writing.  What you’re writing AND saying is all getting slurped into the pen for easy reference later, and the thing is even time-synched – That is to say, you can tap your pen on different steps you’ve written and it will play back what you were saying at that time.  For instance, imagine the sequence below, the steps involved in making one of the 2011 Yule pipes: 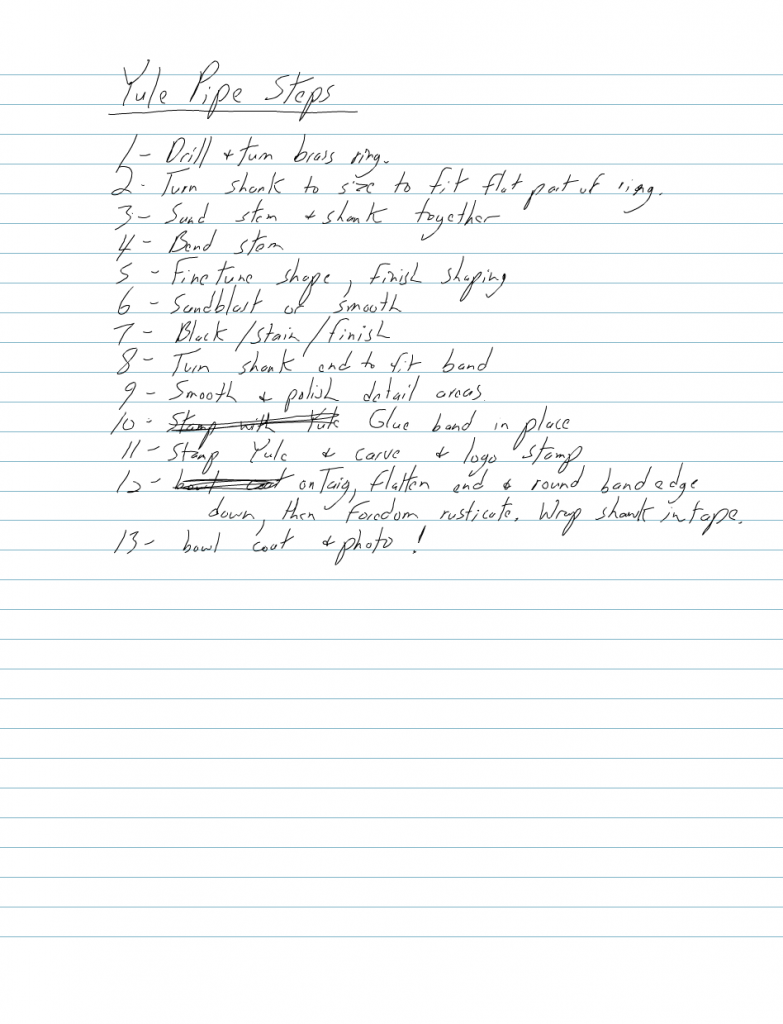 The rough pen writing is as simple and crude as most of my notes, but the file has the advantage that I can simply tap the pen tip on step #7, say, and it will play back my synched audio of comments about that particular step… which are likely to be much more involved than the actual written step.  Pages of text & diagrams can be saved as PNG files or combined visual/audio PDF files, and tucked into my Notebook app as individual subjects and chapters.  Ergo, “How to achieve a two-toned sandblast with black recesses and gold highlights” can quickly go from a scrap page of notes to become its own chapter title in my collected grimoire, complete with full audio playback of my comments about the process.

It’s also been handy in drawing the cartoons for my gradually-developing Kentucky Fried Popcorn webcomic.  The pen does not read existing pencils, so I can do rough sketches and poses and wireframe figures with pencil, then carefully use the smartpen to ink over my pencils and produce a polished, finished ink drawing without any erasing needed.  It’s the high tech version of drawing roughs with non-photo blue pencil.

It has limitations.  The biggest is that it requires custom paper to “read” from – You can either buy notebooks and sketchbooks from Livescribe or print your own paper from free templates if you have access to a 600dpi laser printer.  Also, its ability to read complex shading and crosshatching is limited – Too many overlapping fine lines will cause it to leave blank spaces in the computer scan version where it lost the ability to track the lines.  What it really prefers are strong, elegant, controlled lines in drawings.  I’d love to see its abilities as an art tool developed further, because right now the only other similar tool on the market is the Wacom Inkling and it lacks the Echo’s audio recording and synching abilities.  Battery life has been excellent, but the occasional firmware updates are annoying – As a traditional media artist, I am not accustomed to having to apply software revisions to my pen.  Other than those caveats, though, it is a pretty impressive piece of kit, and I’d definitely recommend one to anyone whose job involves a lot of note taking.