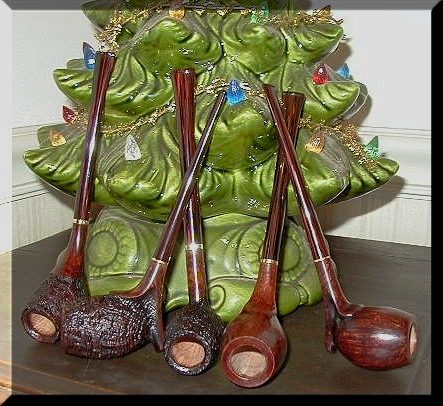 The pic to the left is an oldie from the year 2000, the last year that we made a Talbert Yule pipe.  After the move to France, we just found ourselves with too much to do to tackle the complexity of a full-scale handmade Talbert Yule pipe, though we did do a Ligne Bretagne Yule series for two years before quitting the Christmas season pipes altogether.  It was a pain in the ass coming on the heels of the Halloween pipes, and it was a sufficient struggle to sell high grade pipes in France that it just wasn’t worth the bother.  Now, however, I find myself with more time and a bigger market, and a considerably more positive attitude about the whole thing.  Does this mean that 2011 will see the return of the Talbert Yule pipe?

As I type this, Emily is in communication with a local silversmith regarding the feasibility of having some engraved bands in time.  Ideally I’d like to do a custom cast band, but with the skyrocketed prices of precious metals it’s just too expensive at the moment (How expensive is too expensive?  Getting 12 custom silver bands cast right now would cost $700, so materials plus our labor would add at least $100 to the cost of each pipe).  Also, I don’t have $700 on hand to throw at the issue.  We’re waiting for a quote on a simpler, engraved band and we’ll go from there.  There are plenty of other options, of course – I can drill and cut my own bands from brass here, or even do something more unusual, like a meerschaum/brass combination.  The choice of shape will depend on the band, because I need that little part of the aesthetic nailed down first before I can build a pipe around it.  And then there’s the time issue – Even if the silversmiths come up with an affordable quote, we’d also need the bands done almost immediately, in order to have time to make the pipes and start putting them up for sale in time for the holiday shopping season.  So, it’s an open question…  But it will definitely be sorted soon, because the window of time to commit to the project is closing rapidly and if we haven’t started on the pipes by the 10th, we may as well not.

Of course, the biggest questions is interest – Is there enough collector interest out there to absorb a full 10-12 pipe set of Talbert Yule pipes – High grade pieces that would have commensurate prices.  We’ll see.  I’m willing to tackle the project and am really pretty enthused about the idea (Like pregnancy, it’s been long enough since the last time that I’ve forgotten all the difficulties in favor of the rosy memories).  If you’re interested in seeing the Talbert Yule pipe return in 2011, keep watching this space, and I should be posting the definitive decision very soon.

How about a "Black Christmas" pipe? 🙂