Tales of the Pipe Beggars 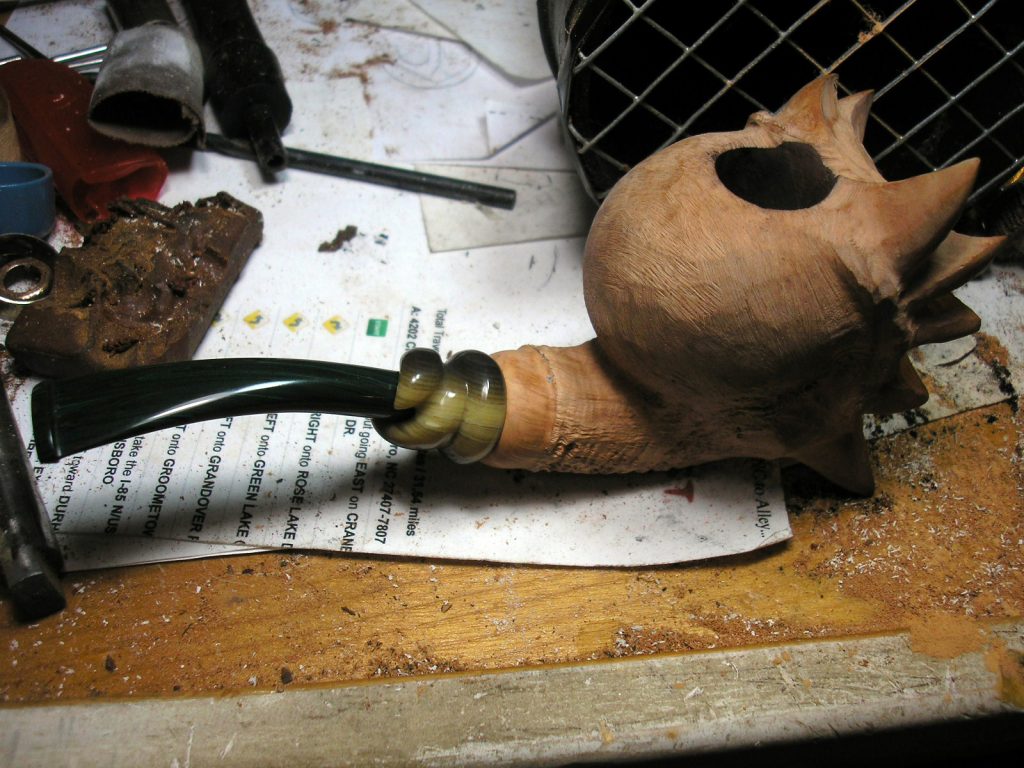 Today’s photo is a quick snap of what’s on the workbench at the moment.  Today’s topic is one that’s come up often, that every pipemaker has to deal with eventually – How to deal with the pipe beggars.   They’re out there!  These are the folks who come up with some of the most original, twisted, and occasionally downright ludicrous reasons to try and talk you into sending them a free pipe, sometimes criminally-motivated and other times just apparently not really understanding that what they’re asking is for you to hand over $300 of pocket cash to a total stranger.  And they come in different types:

Mr. Tragedy – This is a common one.  Typical entreaties go like this:  “Hello, X.  My father bought one of your pipes years ago, and it is his favorite pipe in all the world.  It is a true sentimental favorite.  Unfortunately, he broke it last May, and recently was diagnosed with terminal cancer.  It would be wonderful if you could make another pipe like it, it would mean so much to him in these last years he has.  Unfortunately, I am blind, disabled, and live on a fixed income and have no way to pay for it, so I am asking if you can please donate this pipe for the sake of making a wonderful man’s life happier for his final days.”  Now, this could be a touchy one.  On the very rare chance that this person is for real, you don’t want to be callous, but let’s face it, the odds are that you’re talking to a total scammer looking to pull a classic 419 email scam for a free pipe.  Best advice:  Ignore completely.  He’ll move on to someone else, and this makes it that much funnier when you hear the same story from other pipemakers at shows about how this poor old man actually had a “favorite” pipe that he broke from every single pipemaker you know…

Mr. Pipe Club – I and most pipemakers I know have received emails from this guy in the past.  Typically, Mr. Pipe Club offers you a *great* deal – Send him a free pipe to “review”, and he will promote your work to the guys in his club, thus making it “win-win” for both of you.  Hey!  Again, there is the question – Does he really think he’s being sincere, or is he actively freeloading?  It’s useful to turn this around on him – Ask him if he would be willing to send you $300 in cash, and if he does, you will promote him as a great guy to deal with to everyone you know.  A dose of perspective can help, for those guys who honestly believe they’re doing you a favor by asking for several days of free labor income.  You sometimes have to handle with care, though, especially when dealing with anyone who believes themselves to be “Big in the pipe community”, because often this “request” for a freebie will come with an implied threat attached – If you don’t stroke their ego by giving them their free pipe, they will badmouth you with all their energy.  Fortunately this is a rare phenomenon and most pipe club guys are quite cool, but there are definitely a few of these characters out there, lurking.  I recall one particular fellow that attached to me when I was first getting started, hinting again and again that he was a “reputable collector with considerable influence”, and that I should make him a free pipe in exchange for his “promotion”.  After I failed to respond to this persuasion, he turned on me in a flash and began badmouthing my work and person online, in chat, and so forth.  Thankfully my reputation survived and he is long gone from the collecting scene, but it does prove the point – A guy who is trying to strongarm you into bribing him for his good opinion is not even worth talking to.

Pitiful Student – Sadly, a common character that a lot of us can relate to.  He’s in college at Modern U., he’s in a pipe club there, and he really loves your work…  He just doesn’t have any money because he’s a starving college student.  Could you please possibly give him a free pipe?  Here’s the short answer – No.  I’m sorry, I can relate to scraping by in my college years and wanting a lot of things I couldn’t hope to afford, but still…  There seems to exist the idea that pipemakers have plenty of pipes just lying around, extra stock to give away to friends, and that just isn’t true.  In reality, he’s asking for several grocery bills.  I can’t go to the store and get free food because money is tight for me, and to be honest, if I do set aside a pipe to donate to a good cause, it’s going to be something like the charity auction I held for for Japanese quake victims – Something to raise money for people hit by genuine disaster, not a free toy for one guy.

The Pipe Museum – This one also is tricky because there really are a few legitimate pipe museums out there, often surviving on a thin margin, and you want to support the hobby and the honest places that showcase our creations.  However…  Well, here’s the usual pitch:  “Hello X.  I am the president of the pipe club of Nigeria, and we have selected you as our Pipemaker of the Year for 2011!  We will need a sample of your best work for our club’s pipe museum, where we showcase the best carvings of the pipemakers who have received our award in the past.”  (It’s always your best work too, mind… These guys aren’t happy with just anything, they want you to send them the single Top Grade you made that year, for free)  Here’s the thing – If it’s a genuine pipe club with the 75 members that he claims, it would be easy enough for all of them to chip in a few bucks and actually purchase the pipes for their museum, if it exists.  Otherwise, sadly, what’s really happening here is that someone is saying, “Hi, you don’t know me, but if you send me $900, I’ll tell you you’re cool.”  Bottom line – Ignore this one unless you can look their museum up on the web and it’s been in at least a book or two.

There are others, but that’s enough writing for now.  Over the years, though, the single best and funniest example of this that I have ever encountered was the guy known as “The Shoe Cobbler”.  Some years back, I received this quite-long email from a fellow saying he had followed my work for years, I was his absolute favorite pipemaker for my brilliant designs, etc etc, and how he was devoting his entire life to the labor of hand craftsmanship.  He was learning to make shoes by hand, the old-fashioned way, and could truly appreciate the long hours and toil that went into creating a handmade pipe.  However, this apprenticeship left him very poor, but he was hoping against hope that – as a fellow appreciator of quality craftsmanship – I might send him a pipe for free, since we were obviously rare kindred spirits.  I gave him the usual polite refusal (“I’m sorry, but I need that money for groceries/rent this week”) and thought I’d heard the last of it, until conversations with other pipemakers revealed that we had ALL received the exact same letter.  Each and every one of us was his single favorite carver, he’d been following us all for years, and we were all brilliant…

All I could think was, next time, at least change your text a little before you copy/paste to 25 different guys.

Man, those pipe-beggars have some gall, huh?

So, since I just agreed with you, you'll send me a pipe as a form of thank you, yes? 🙂

I would really steer far, far clear of any sort of "Reviews for discounts" situation. No one is going to come out of that sort of thing looking good.

It really is amazing how much people will try to scam anyone out of anything. I had a situation where a pipe maker approached me about one of his pipes. The deal was, he'd take a specified percentage off of any pipe I chose in return, I'd review the pipe and my experience with him. The whole thing was a bit of a challenge on both our parts because my wire transfer got lost somewhere in the process. All turned out well and not only did I end up with a great pipe, I made good on the deal. I think more than anything, the deal should at least be even. As a pipe smoker, I want to keep the hobby and industry running for a long time, therefore, supporting carvers and retailers is well worth it to me.

This is why I no longer leave my Facebook open.

Obviously Stephen does not know how lucky he is. I think Lexa's humor has earned her a pity pipe!

Hello Trevor, May I please please please have a pipe for free? My husband is very busy making pipes for everyone else and I fear that I shall never get a handcrafted pipe of my own. I will tell my husband that your pipes do not smoke as good as his but we will both know who's pipes smoke better!

You should get into the art of scambaiting. Agree to send them (the obvious scammers) the best you've got in stock in exchange for that they pay shipping – in advance. Hopefully they'll enjoy the rock (the very best one you've got in stock) they'll be getting in the mail.

If enough makers become aware and do this the scammers will soon realise they're actually losing more money than they're making and that rocks are hard to sell.

So, there's no cobbler? I swear, that story really resonated with me so I sent him my entire production at the time, consisting of three hemlock pipes, one I made entirely of acrylic, and one I hand poured from polyester resin. I only asked that he get back to me with a review but I never heard from him again….