The Three Most Overblown Pipe Controversies

It seems like there’s been a round of late-summer flamewars on various pipe forums over the usual suspects.  I don’t know what it is about these topics that makes it impossible to ever have a rational public discussion about them, but in my 18+ years in online pipe forums, I can’t recall any conversations about these things that ever didn’t degenerate into arguments and name-calling.  And while they each have some degree of interest to those of us in the hobby, none of them are worth even 1/100th of the bickering they generate because – *Gasp* – None of them are that big a deal.  Here they are –

Bowl coatings
There was recently a long and fairly obnoxious thread on Smokers’ Forums regarding this subject, in which some pretty ignorant statements were made by a lot of people who take this issue far too seriously.  The gist of the argument that the antis would have you accept is that all pipes would automatically smoke better if pipemakers would just leave out those awful, foul bowl precarbonizations and let the naked briar perform its magic.  Two seconds of thought will identify the error in this logic – It presupposes that the main aim of working pipemakers is to find ways to make their pipes smoke worse.  (I often wonder what they think pipemakers do..  Do they picture us sitting around trading ideas amongst ourselves for bold new ways to sabotage our own products?  “Hey, I’ve got this great idea, we’ll use two-part epoxy as the coating binder and that will make it taste EVEN WORSE.  Brilliant!”)  No, the bold, bald truth of the matter is this – A bowl coating is just a thin layer of carbon.  Just like the cake that smokers work so hard to build.  This is the irony of the dedicated coating-removers – They buy their pipes and then work so hard to carefully remove the carbonizing, so they can work all over again to build a replacement carbon layer for what was already there.  I won’t argue the buyers’ rights to do what they want with their property, but I do find it a bit funny, I have to admit.  It’s akin to buying a new car and being convinced that the factory paint coat is inhibiting the performance of your vehicle, so one meticulously scrapes off all the original paint and then repaints by hand.  Also, a hard truth that the religiously anti-coating crowd won’t accept – 95% of the time, if you blindfolded the smoker and he didn’t know which was which, he either could not tell the difference between a coated and uncoated bowl, or he’d pick the coated bowl as the better break-in smoker.  Unfortunately, it is “cool” among the forum crowd to be anti-coating, so this is not the sort of opinion you’re likely to hear.  (The SF thread specifically asked pipemakers not to vote in the poll or comment, which is like hosting a debate on climate change and telling working climatologists not to attend) In the end, all a coating is is a thin layer of carbon that can be left in or taken out.  It’s not a holy war, and there is no grand plot by the makers who use them to purposefully ruin the smoking experience of those who buy our pipes.  I know this is a radical concept to consider versus the popular opinion, but it’s really that simple and that minor.  Really!

Pipe Finishes
In another thread, someone once asked about pipe finishes and I gave a straightforward and open answer about how most pipes were finished.  This got me yelled at by a guy whose entire collection consisted of a dozen basket pipes he’d bought at yard sales and refurbished, but his brother-in-law “works in a furniture company so he KNOWS what he’s talking about!”  Yeah.  Here’s the thing – Most pipes on the market are not finished “only with carnuba wax” and nobody can tell any difference.  The oft-repeated claim that finishes will “seal the wood” is mostly nonsense, at least when it comes to an educated pipemaker properly applying a finish.  I can’t tell you how many times I have had some guy lecture me about the importance of not “sealing the wood” while he sat there happily smoking a varnished pipe.  Unless the finish is applied too heavily or badly, it’s just not an issue.  When pipes are finished with something that makes them smoke terrible, they either never make it to market or get pulled off of market because they smoke terrible.  Again, pipemakers are not in business to sabotage the performance of our own work.  The idea that one can buy a cheap pipe and sand the finish off to make it smoke better may have some origins in the mass-produced pipes in the lower-end range (It depends heavily on the “roll up my sleeves and tinker” mythology that we can make our cars/wiring/furnaces/whatever perform better than factory spec with a little hand work).  Maybe you can improve the smoke in a Grabow by sanding the finish off, I don’t know, but what I can say with certainty is that if you sand the finish off your Dunhill Dress Black, all you’re going to get from the experience is a ruined finish.  Today’s artisan pipes are a pretty evolved item – While it might have been possible back in the 60’s to do some aftermarket tweaking to get an extra 50 horsepower out of your musclecar, all this finish removing and carbon removing today is more like the kid buying an ungainly aluminum wing to bolt onto the trunk of his Honda Civic.  It’s a lot of work that isn’t going to do the owner or the pipe any good.
And it’s definitely not worth arguing about.

Pricing
Is it impossible to talk about pipe pricing in any public forum?  Pretty much.  There’s no good reason for it – Artisans want to know what their potential buyers think of their pricing, and collectors want to keep tabs on what costs what, but despite this, virtually any thread about pipe pricing will degenerate into a flamewar.  The problem is that a lot of the huffery will come from guys who are not in any sense potential customers – They’ve never bought a pipe over $50 and never intend to, and are therefore convinced that anything more expensive than that is a ripoff and they’re doing you a favor by “calling it what it is”.  Recently, some random fellow on one forum came at me with the usual – “Those are nice pipes but they’re all overpriced museum pieces that real people can’t afford.  What you need to do is cut all your prices to $50 and you’ll sell a lot more!”  This kind of attitude comes from commodity thinking, the belief that any price cut will automatically transform into increased sales, which is completely inapplicable to the artisan pipe market.  Most of us are making pipes as fast as we can right now – I make and sell as many pipes as I can create to my personal standards each year.  Cutting their prices won’t magically make more pipes TO sell…  There’s no untapped volume increase out there to fill in a greater demand, unless I start hiring employees and turning the shop into a factory, and that just defeats the entire appeal of an artisan pipe brand in the first place.  And why is pricing even a controversy?  What possible business is it of anyone’s, what others pay for pipes?  So there are pipes that sell for $500, $1,000, $3,000…  Big deal.  There’s no reason for this to be controversial.  Expensive pipes don’t keep us dependent on Mid-East oil, they don’t take budget money out of our schools or our roads, and they aren’t being produced in sweatshops by slave labor.  Despite their harmlessness, there are still guys who will froth at the mouth over pipe prices.  I don’t get it.

I’m not sure what it is about these three topics.  I’ve seen grown men nearly come to blows over each of the above.  I myself have been tempted to knock a few teeth out of the occasional guy who accuses me of willfully screwing over my customers by my prices or because I like a carbonized break-in smoke.   Yes, they’re topics of conversation, but I don’t understand why they hold such religious fervor for so many.  My best guess is that it’s the usual male thing – “Pipe Expert”, deep down, is convinced that if he can prove his superiority to the crowd it will improve his standing in the pack and increase his mating potential.  Yeah…  😀

PS – As a closer, I must add that I will only discuss these three issues with people who can make it to the end of the following chart: 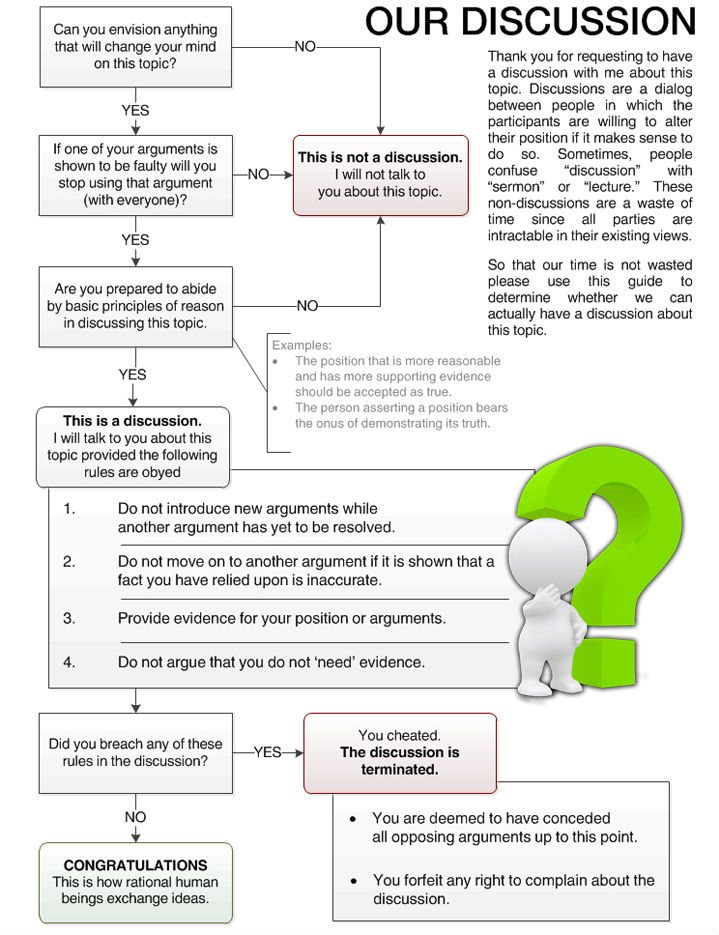 You and Em missed the, "how to make a crappy smoking, overpriced, pipe," brainstorming session the pipe making Illuminati had the other day. I'll pass on the minutes of the meeting for you guys to peruse. Turns out we're going to try and use bird droppings for the new bowl-coating formula. It's going to be teh bomb!

Just to stress – I don't have any problem at all with people's preferences, for or against. That's no different than whether someone likes chocolate or not. The thing that sets me off is when people start accusing the pipemakers of deliberately trying to poison them, ruin the smoking quality of the pipes, or cover ups giant bowl flaws via coatings. That is what makes me testy.

Most of the pipe smoker don't blame pipemaker's to coat their pipes. Personally I only state that I greatly prefer an uncoated bowl. I love to see and taste briar.
Even if in some cases the first bowls can taste bitter, in some others its great.
I am unable to make a pipe by myself, but I can build my own cake, that's my pleasure.
So, most of the time I buy uncoated bowls.

So, now we know 6 more rational people. I count that as a plus.

"Bowl coatings are used to cover flawed briar" is right up there with "9/11 was a Jewish conspiracy" in the realm of stupid myths that will not die. Can you imagine the outcry that would occur if someone actually bought a pipe that burned out *because* a bowl flaw was hidden by a coating? That would pretty much be a career ender, there, but it has never happened.

Correct on all counts.

That sums it up well. I only rarely pop in on any forums these days & usually on the benign what you smoking today thread.

Don't forget that bowl coatings are only used to cover flawed briar ;). I am glad there is a search function on the pipe makers forum so I can avoid the drivel.