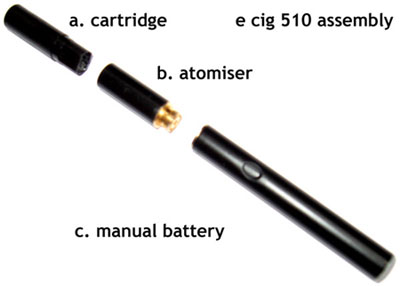 Back in October of last year, I wrote a blog piece about the new subsection of the smoking hobby, the increasing popularity of e-cigs.  To recap, a typical e-cig is something roughly like the diagram to the left – A battery, an atomizer, and some sort of cartridge to hold the flavored liquids that replace tobacco as the “smoke”.  There are a thousand varieties of these devices now, and all boast the one great advantage over tobacco in that they produce only moist vapor, not smoke, and are legally enjoyable in non-smoking spaces (Whether the proprietor will allow them is another story, as many locations request e-cig puffers to not “light up” simply because it “looks like smoking”… a damning indictment of the hypocrisy behind the suppression of smoking as a public health hazard).  But these little things are clean, pretty safe, don’t leave lingering odors, and can be dropped into a pocket without burning a hole in one’s shirt.  While I know many traditionalists will scoff and dismiss them as toys, I don’t think they are going away.  My personal opinion is that we are looking at the future of smoking for the iPod generation.

I’ve had a few of these devices for about a year now.  My small collection consists of a Janty Ego: 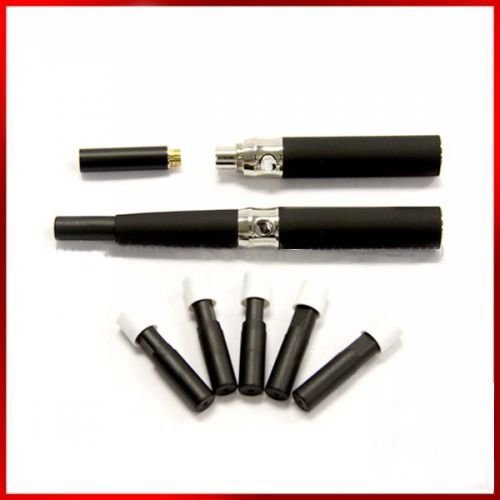 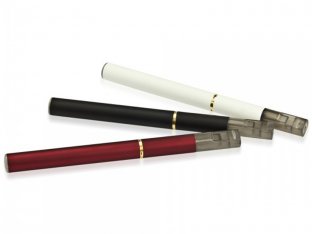 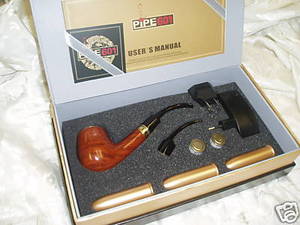 As you can guess by my modifier above, the DSE-601 epipe is trash – Don’t waste your money.  It’s designed so that the atomizer is a permanent part of the bowl, so that when it fails (Typically within 2 months), the entire bowl section must be replaced at a $40-50 cost.  While I know lots of former cig smokers who love these things and think replacing the bowl every month is no big expense compared to boxes of cigarettes, it is galling to a pipe guy accustomed to buying a pipe and keeping it forever.

The Janty and the 510 have kept on plugging, however.  An aftermarket atomizer has failed while the Janty’s original unit soldiers on, and the 510’s atomizers continue to work just fine.  If anything, I would say that the budget 510 delivers a superior smoke to the Janty (Better flavor, easier draw), but it isn’t made nearly as well, and leaks fluid in rest.

So, what are my observations of e-cigs from a year’s use?  They don’t replace pipes, but they do have their value.  They excel at portability – If I’m going over to the pipe shop and only have ten minutes to sit and chat, I don’t want to bother taking a pipe and having to fool with filling, lighting, etc, when I can stick an e-cig in my shirt pocket with a dropper bottle of my fluid flavor of choice, smoke it as long as I want, and not have hot ashes or mess to contend with.  The downsides?  Well, they are appliances, first and foremost.  I have yet to see an e-smoke device that anyone is going to love like a handmade wood pipe.  It’s a very throwaway culture, where the smokers buy the coolest new gadget and use it for a few months and then dump it in favor of a new model with different features.  This is the opposite universe from my world of guys who buy pipes and keep them and use them for forty years.

Also, they’re amusingly seasonal, at least for me.  I enjoyed them all through last Fall and then stopped smoking them entirely when winter hit, because the cool metal cylinders just did not provide the warmth in the hand and the full, heavy latakia flavors that I craved on cold winter nights.  I nearly forgot about them, but when springtime rolled around I dug them out again because they’re better summer smokers than pipes – There’s nothing like sitting on the back porch drinking a root beer and smoking a chocolate/banana flavor blend on a dusky summer evening.  E-cigs excel at sweet tooth flavors and are generally mediocre to lousy at tobacco flavors, at least in my experience so far.  The latakia and perique liquids have little in common with their tobacco counterparts, but where a caramel-waffle-flavored tobacco would make me gag, such a flavor in an e-cig is likely to be delicious.

(Note – Some lawmakers are already stirring up noise over just this sort of flavorful e-cig blend because it “appeals to children”.  Never mind the fact that e-cig blends can be enjoyed completely without nicotine, chemicals, or any additives other than food flavorings…  They don’t want to see anyone “smoking” because Fuck You, that’s why.)

I mentioned in the closing of my last e-cig post that I was considering a Talbert epipe – Now, a year later, I still am.  I’ve sourced the parts I need and have all the bits on hand to put together test samples, but just haven’t had the spare time to work on it.  A number of people have inquired about when I will have some for sale, and the answer is still, “No time soon.”  I need to build a few, experiment with them, live with them, and generally get the feel of the mechanics of the things before I’d even consider making anything for sale.  The big issue for me lies in whether it would be possible to marry the charms of a briar pipe with the convenience of an epipe – Only time and experimentation will tell.

My E Cig has really helped me cut back on how many times i smoke. It not only was a healthy change but an economical one as well.

The innards are actually not that big a deal. I've got sources for a number of parts suppliers. The actual hardware is largely disposable anyway – That is, rechargeable batteries that can be bought at Radio Shack, atomizer replacements that can be ordered direct from any supplier, etc. The trick will be to tie the components together into a functional and attractive body.

Sir, with the look and beauty of your pipes, I would love to have a chat with you. I have designed very beautiful bowls (not as good as yours, but enough to catch a lot of attention) and if mine with the curves and such can be done Epipe style, then there is not a doubt in my mind you can do so. I would love to learn from you on better body coloring, if you wouldn't mind taking some tips from me on how to get it functional with the beauty. 🙂

One of these days I am definitely going to try my hand at epipes. At the moment that project is totally back-burnered because it isn't something that will produce immediate income, so it's waiting until I have a little more spare time to fool with my ideas in 3D form.

Trever, if you ever do make an e-pipe, I'd buy it. But where are you going to get the innards for it that are worthy of putting your name on it?

That is the argument being proffered – That ecig blends with sweet flavors were an evil plot to ensnare innocent yoofs and lure them into the clutches of tobacco. Unfortunately, it's even more flawed than the old MJ "gateway drug" stuff – I have a hard time imagining anyone wanting to jump to analog cigs from ecigs, and my firsthand experience is that the vast majority of movement is the other direction. A LOT of ecig smokers say that ecigs were the only successful solution they ever found to quitting regular cigs, after trying drugs, patches, gum, etc. The ecig has the hard-to-beat benefit of allowing the exact same full experience as smoking a regular cigarette (Drug and patch users complain that while this medicates their nicotine fixation, the lack of actual puffing freaks them out – It's a body habit). An ecig replicates the cig experience for them while allowing them to directly control their nicotine intake according to the strength of the flavors smoked, and gradually reduce it over time without losing that habit of just sitting back in the chair and taking a big draw on a smoking cig.

To play Devil's advocate here and put the best possible face on the opposition to e-cigs, is it possible that some people (and lawmakers) are worried that e-cigs might be a sort of "gateway drug" to the nicotine-and-smoke kind? I realize that you may not be inclined to give the opposition the benefit of the doubt, but it seems to me that this would be the only logical argument against e-cigs. It might be interesting if you wrote a post addressing that.

My friend had the same observation – His daughters like his ecigs because the smoke doesn't sting their eyes like real smoke, so they can crawl all over him when he's smoking.

Sounds cool. I'm a traditionalist but I just had two kids — youngest is 6 months — and I can't smoke around them so that would be a nice alternative. I'd buy a Talbert ePipe