Refinishing my own morta, a project 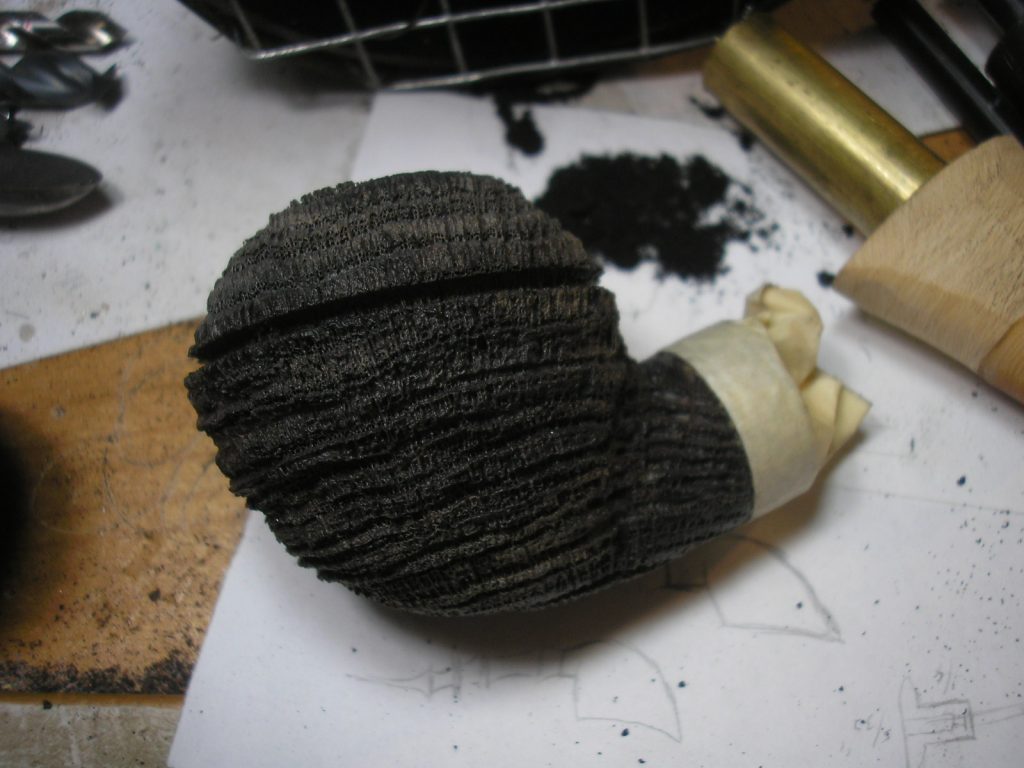 Ten years ago, before we moved to France, I made this silver-banded morta pipe.  It was during the year prior to our move, when we were working out the detail of the workshop purchase.  I asked for some scrap morta to be mailed over, so that I could spend some advance time working with it to see what it was like.  One of the chunks was this piece, a fairly large block by morta standards, though it had a number of flaws.  I decided to try making it into a sandblasted tester pipe anyway, which I left with a collector friend here in the states.  8 years later, after our return home, he gave the pipe back to me and instigated this refinishing project.

The pipe had held up well over the years, despite being basically a beater, and once I had it back I determined to refinish it completely, including replacing the original molded acrylic stem with something handcut and better suited to the pipe.  I want at least one medium-size Breton morta of my own before I run out of the material, and while I just can’t afford to keep a $600 pipe for myself, I hope to turn this piece into an attractive regular smoker.

Getting to that point meant tackling a couple of problems with the pipe.  It was unevenly colored, with a brown bottom, the sort of morta that I would avoid using today, though I must admit that this piece turned into a fine smoking pipe.  The bigger problem was that it had a few fissures in the wood – The sort of small splits that are problematic with morta and make finding large workable blocks a challenge.  Morta splits aren’t like briar flaws.  With briar, you tend to get unsightly black pits.  With morta, you get deep splits and fissures – They may be visually small, but you can often insert an entire pin into one as they go all the way through.  This pipe had several, though fortunately none of them were deep or went into the bowl or the airhole/mortise.  Since it was just a tester pipe, I had originally mixed up a filler for the fissures using Conap epoxy and ground morta dust, effectively making a hard morta paste that would not only fill the gaps but keep them from ever splitting further.  The trick worked out, too!  8 years later, the ground morta fills were still invisible since, unlike with briar fills, there is no problem with stain not matching the putty – It’s flat black, just like the morta around it, and the only telling clue was a slightly different surface texture in a few spots.

First step in the refinishing was to lightly blast the entire thing again, to remove the prior finish and let me examine the state of the original paste fills.  They were still hard as rock and showed no signs of cracking so I left them alone and moved on to the coloring.  Since I’m not particularly crazy about the mottled coloration of the bowl, I’m going to do something I don’t do on the mortas I sell, and stain it evenly black.  Annoying, but it will make the thing look better (Sometimes color gradations in morta can be used to artistic advantage, but this one is just splotchy).

Once this beastie gets its final finish, the last step will be to make it a handcut stem.  I’ll post more pics in a follow-up article as it progresses, and I expect this will probably be one of my new traveling pipes that I turn up at shows and pipe shops with.

Love the shape. Would enjoy seeing the final result.