Here is the continuation from the first part of this story.  To recap, I’ve been thinking about an expansion chamber design that would be a modern, more exotic variation on the traditional calabash.  My last post brought me up to the stage of designing an African meerschaum insert for the lower body of the pipe, which was made from aged Holly.  The meerschaum insert separates the smoke from the Holly and provides an absorbent chamber where the smoke can expand and condense.  The entire mortise insert section took some planning, and resulted in a three part assembly of meerschaum chamber, briar mortise (To be stained to match the upper bowl), and brass surround ring to guard against cracking. 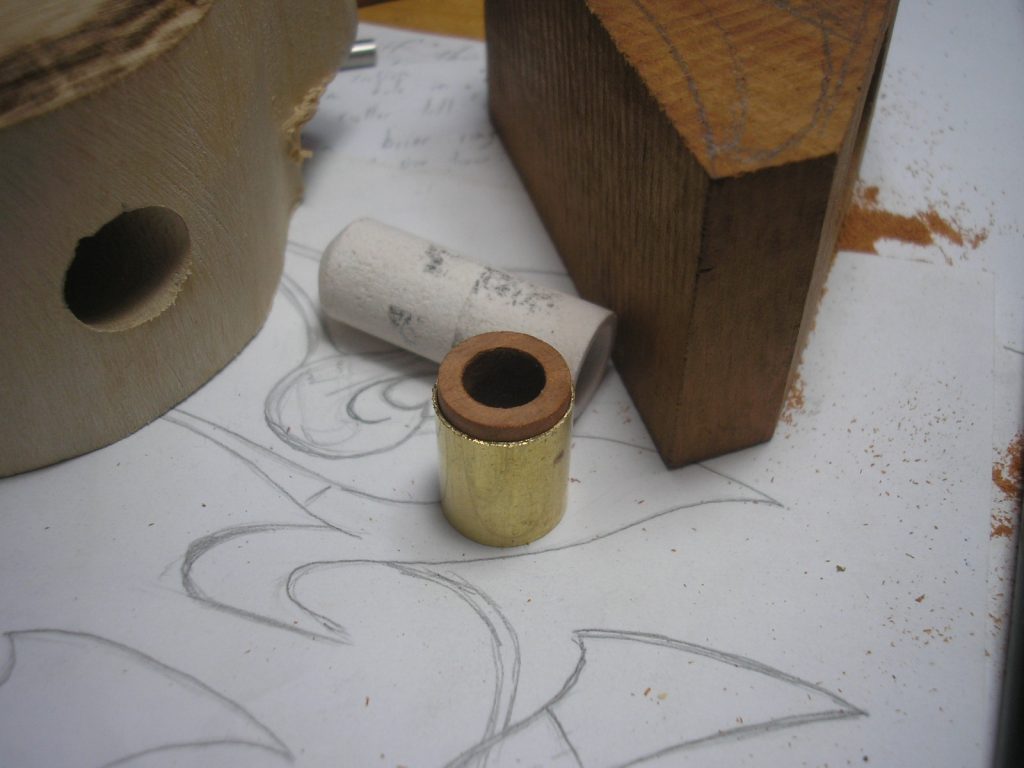 With that assembled, it was time to turn the stem.  Normally I prefer Delrin as tenon material, but this needed to be a one-piece design so off to the lathe: 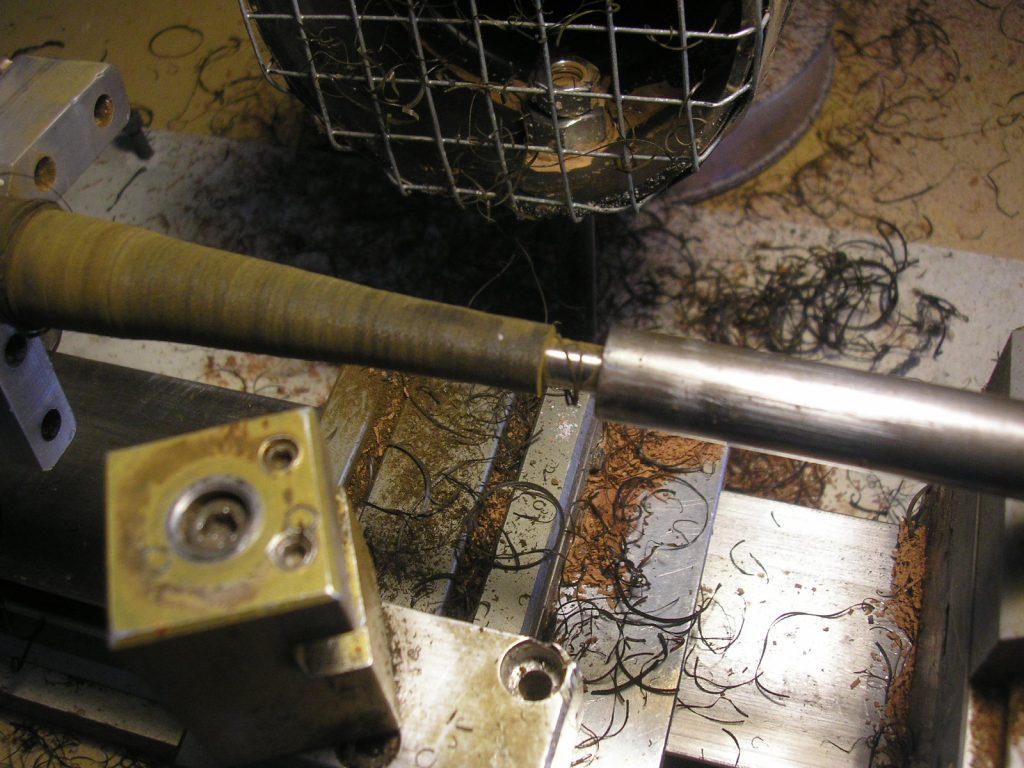 Probably the hardest thing about this project was trying to keep the order of assembly straight in my head, since it was a nest of things that various bits that could cause all sorts of headaches if they were fixed in place too early or too late.  I picked a swirled, milky acrylic to serve as the spacer between briar bowl and Holly lower body, and began the shaping of the thing in earnest.  I knew going in that any pipes like this were going to carry a high price tag due to the hefty labor involvement – It’s basically like making two regular pipes. 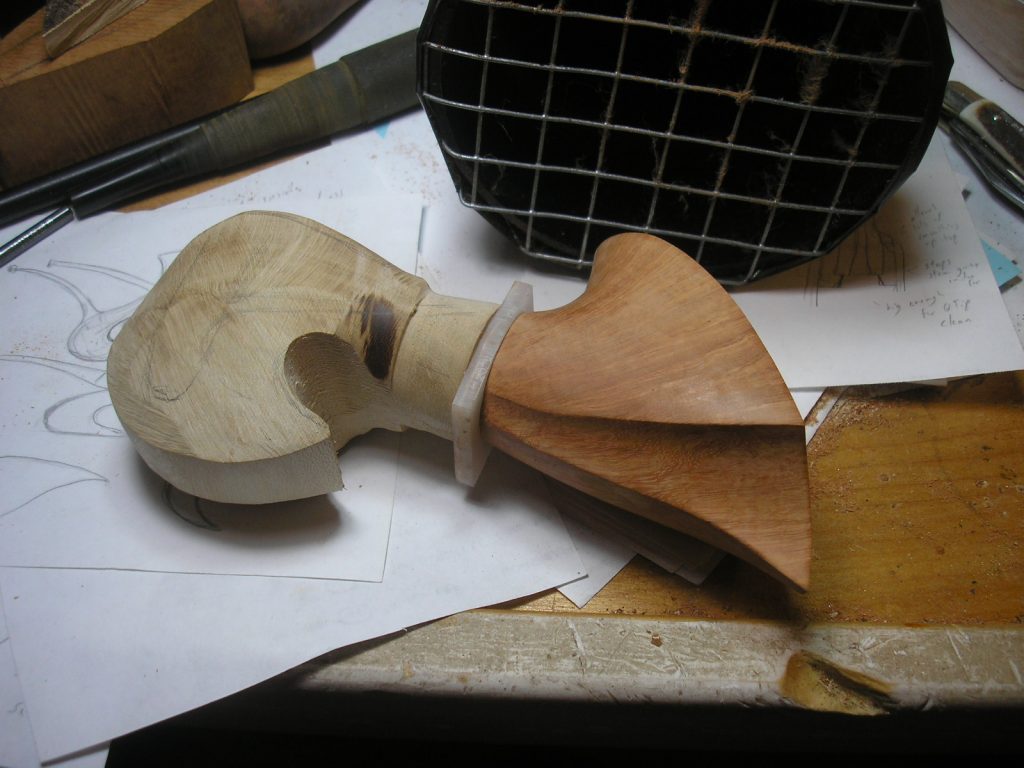 Here it is roughed out and ready for fine-tuning, with the turned stem rod test-fitted.  Not the most elegant thing to view at this point! 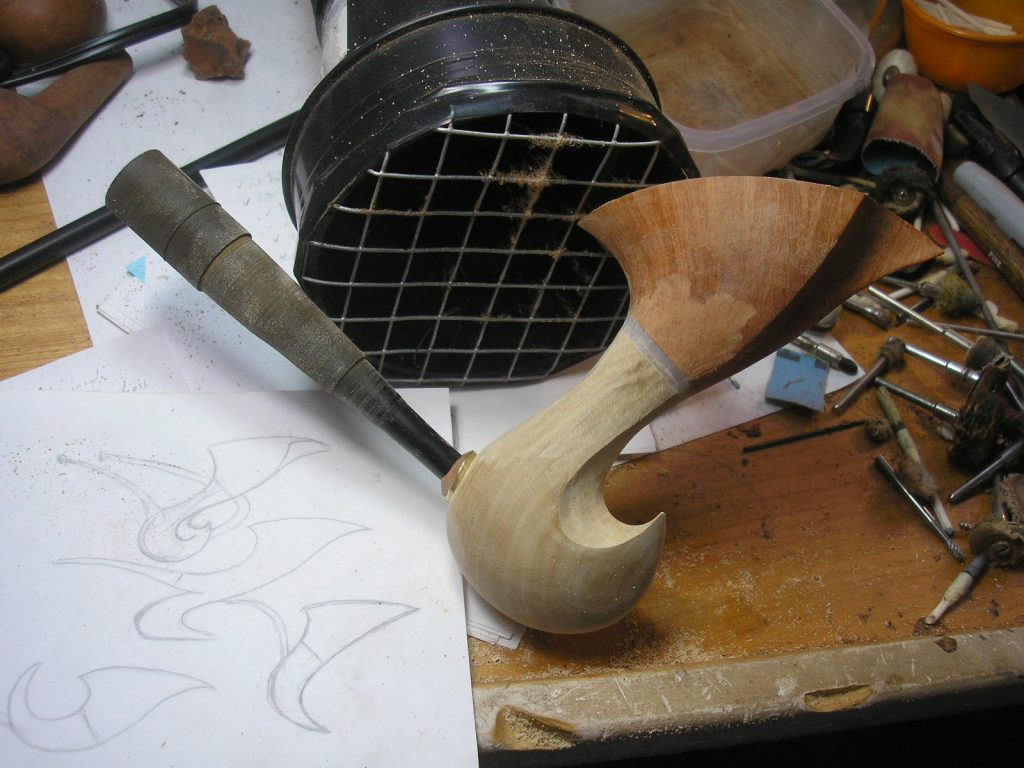 The Holly lower section polished up beautifully, with a subtle grain ring pattern that complimented the shape without being very obvious.  My goal was to create the same sort of visual balance as a traditional calabash, with the lower bowl section being of a near-uniform color while the upper briar bowl would be stained to really make it pop, as seen below: 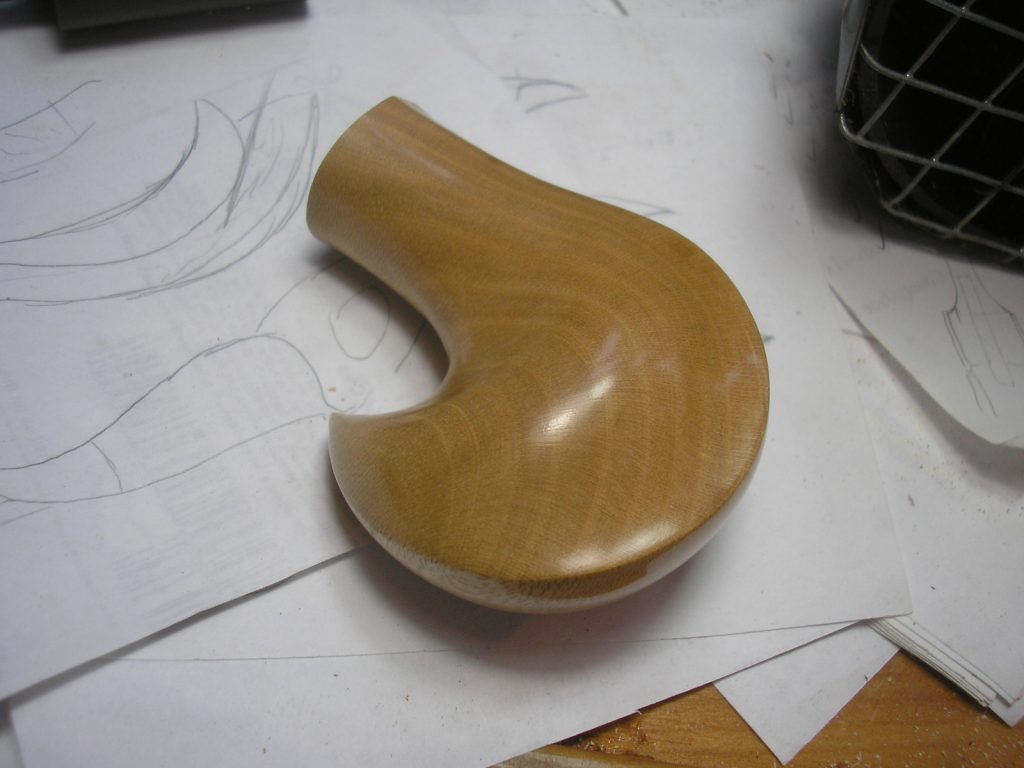 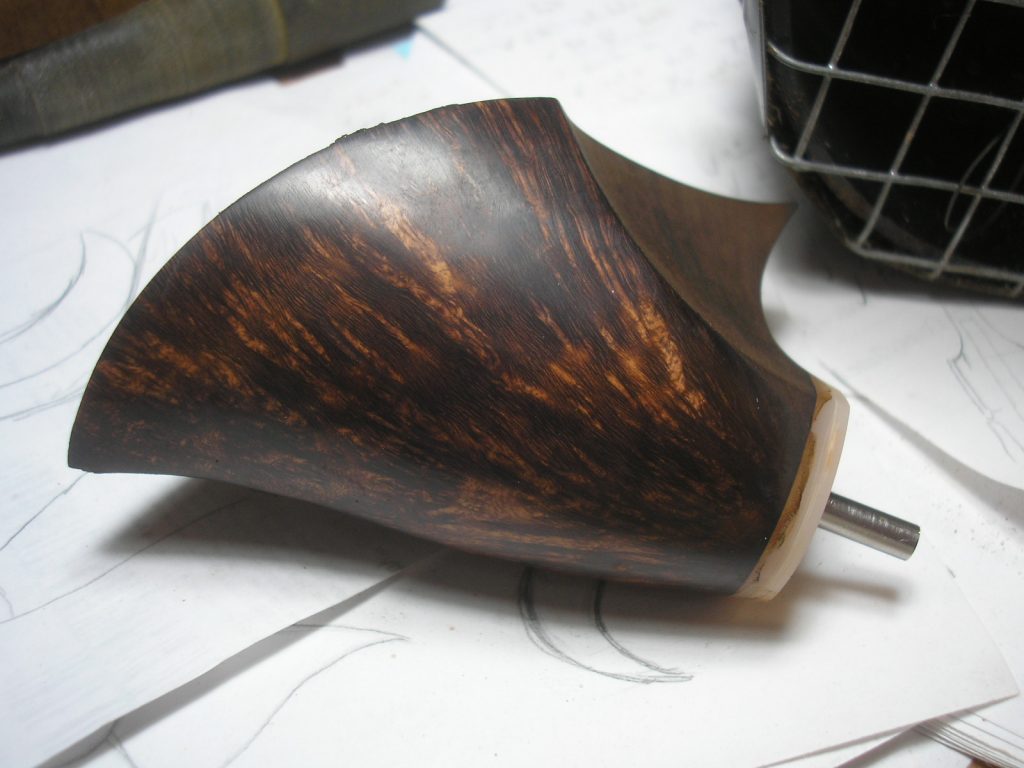 The contrast stain on the briar bowl is going to show off some really beautiful bird’s-eye on top – It’s just a nice piece of briar all-around. 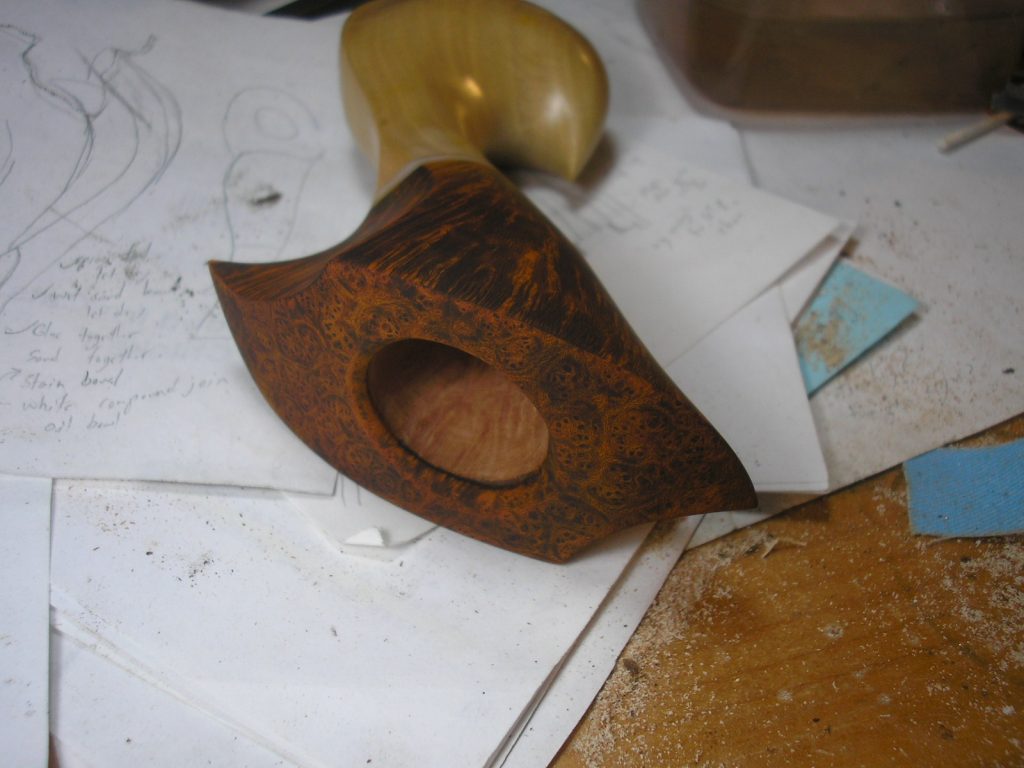 It’s in the final stages now, with just detailing remaining.  Below you can see a process shot of stem work, where I’m using adhesive-backed sandpaper to sand flat the internal V of the bit. 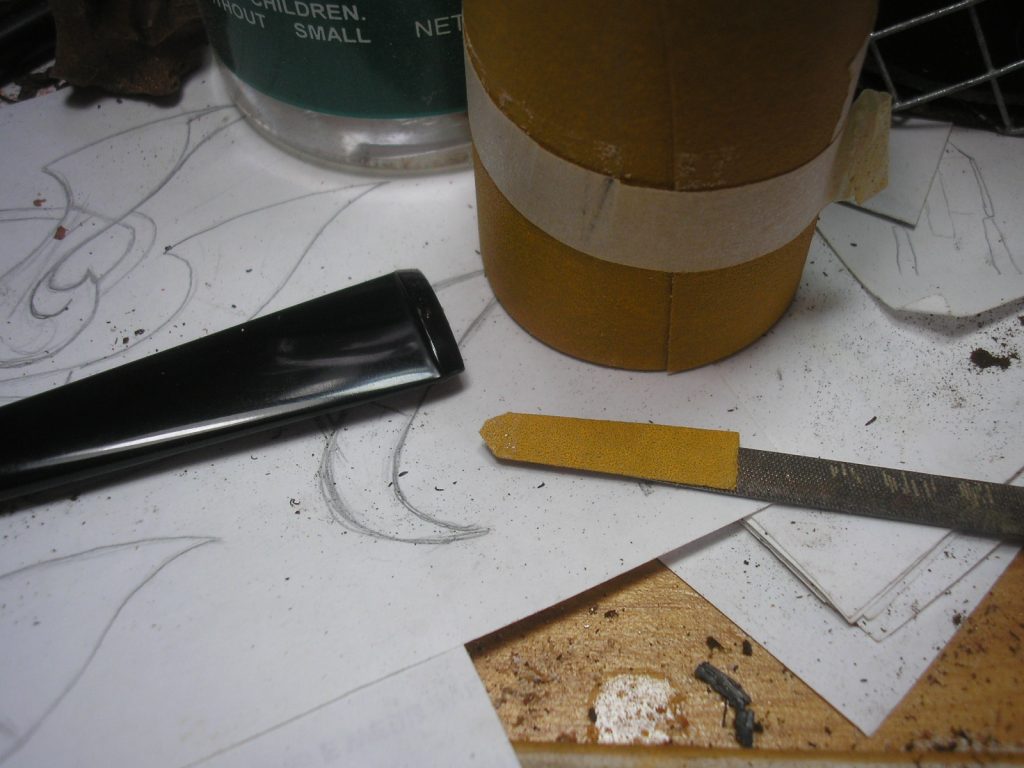 This pipe took a lot of draw-testing.  With the airflow going through so many bends and curves and twists, it would have been very easy for it to feel constricted and tight, and I was keen to be sure that it was still an easy, smooth draw when all was said and done.  It’s laid out well for long-term cleaning – A straight bit can be twisted down into the airhole in the briar bowl bottom to ream the air passage between bowl and expansion chamber, and the bottom of the mortise is large and open to allow Q-Tip (or pipecleaner) cleaning of the expansion chamber.  All this comes from my general dislike of fancy pipe designs that have smoke-crippling problems built in, especially pipes that don’t allow airhole reaming as the years go by.

And so, here we are after a week’s worth of work – The pic below shows the pipe nearly completed but for the final polishing and stem bending.  As I type this, it is fully finished and sitting in the cabinet with several others waiting for the next website update.  Which is going to be sizable, by the way…  I realize it’s been some time since the last update, but it’s usually fairly pointless to post new pipes in the week before the Chicago show, so I’ve been working hard to try and finish a little something for every page on our site.  If all goes well, I should have a couple of new Talberts, a new Goblin, some new LBs, and even a new tamper and some jewelry by Emily to post this week.  Fingers crossed! 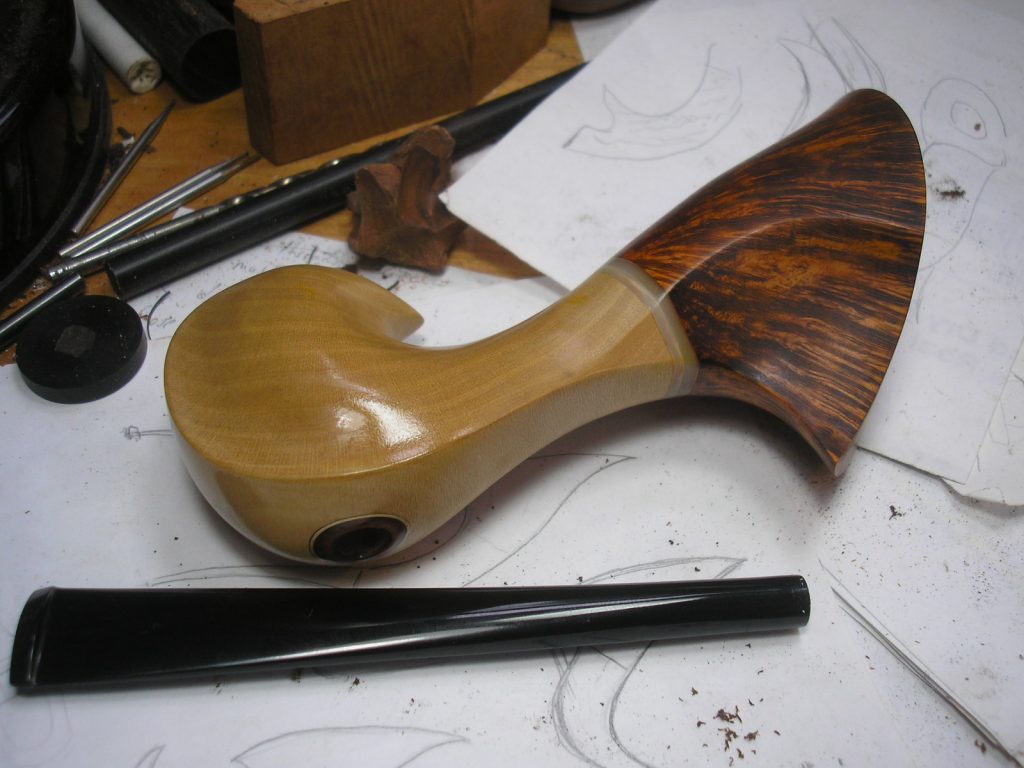 *got to hoover over this diff. projects*
🙂

The result is splendid !