I sit down to write today both jubilant and a little exhausted – Tax season is finally over, and the tax nightmare that was our move from France to the USA is now finished.  Nothing like doing two years of taxes at once AND having to figure out which moving expenses count as deductions and how to handle losses across an international line.

I’ve got two bits of news regarding Ligne Bretagne pipes – One good and one not so good.  Hitting the good first, buyers purchasing LBs starting this week will notice a little improvement – We’ve got in our first shipment of stamped pipe bags.  Over the past couple of years we’ve gradually upgraded the entire LB line in various small ways, from improved finishing to improved staining to the move from what started as simple cloth bags and progressed to a nice green velvet bag and now to the same velvet bags embossed with the Ligne Bretagne logo, as seen here: 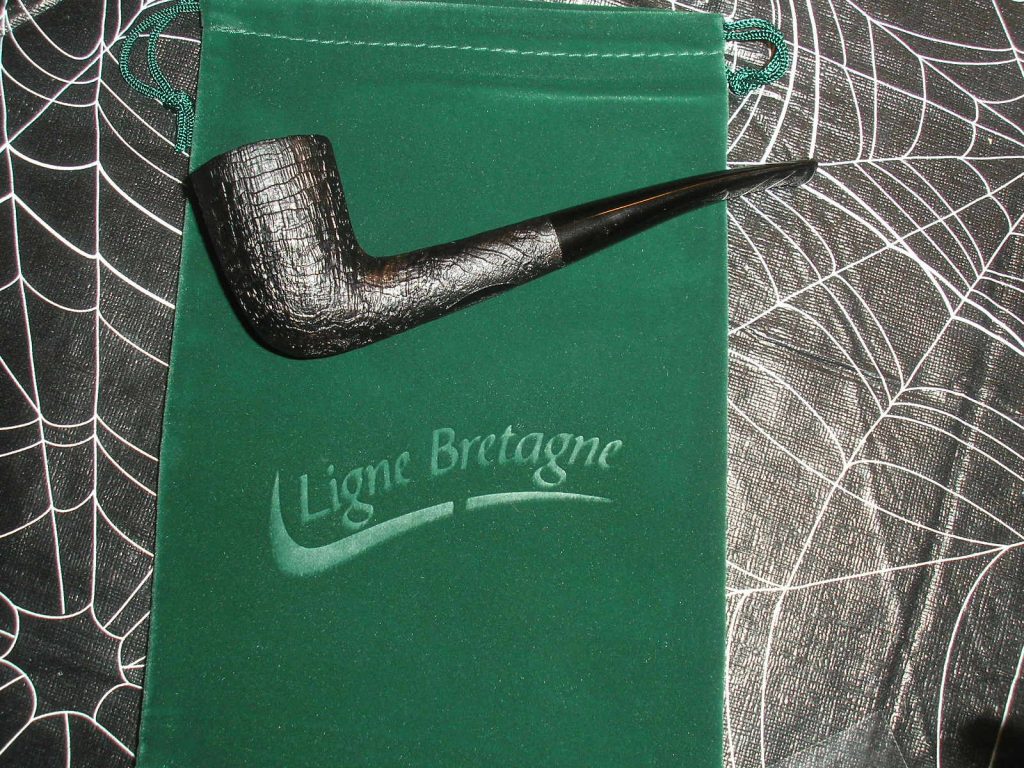 This move helps further my goal of really establishing Ligne Bretagnes as a quality midrange pipe brand, and less as the red-headed stepchild of Talbert Briars.  BUT…  and there is always a “but”, it brings one major problem and that is the bad news.  Part of doing our year-end closeout was running over the price and profit calculations for the various different pipes we sell.  Talbert Briars, Ligne Bretagne Collectors, and Goblins all came out good, but standard Ligne Bretagnes, not so good.  Unfortunately, they are by far the least profitable pipe we make – We’re talking about a whopping hourly wage drop for any time spent working on, selling and shipping Ligne Bretagnes.  Given that I like to eat, and am carrying a lot of debts still from our French relocation, I can’t afford to allot much of my time to the lowest paid work.  Something has to give somewhere.  Since pipe folks are often keenly interested in production/price/quality equations, I thought I would put the question to you all, and see what the buyers favored.  The choices are three:

*  I can make a lot fewer Ligne Bretagnes.  This means essentially making them in my spare time, or when I just need a change of pace from making Talberts.  Availability would drop off a LOT.

*  I can retain current quality and quantity and raise the prices across the standard line to make the pipes profitable to produce.  This would entail a pretty sizable price hike, bringing them back into the price range they were when priced in euros.  Currently they run $119-$165 on average.  Increasing to an equal profit point would put them at $145-195 average.

*  I could keep them at the current prices and current output, but scale back the working time invested.  Things that would go away would be multi-layer staining, two tone contrasted sandblasts, etc.  The bulk of our LB labor is in finishing, so it would basically mean doing much simpler stains.  No more golden contrast-stained super bird’s-eye fests and that sort of thing.  I’m not willing to compromise the engineering, internals, or fit & assembly, so finishing work is basically the only point of fluctuation.

If you’re a pipe buyer, think about the three options above and then vote in the poll below.  Let me know your preference among the three possible options.   And it really does have to be one of the three, too – The only other possibility is to hire someone to help keep production up, and I have no room nor sufficient income to afford to hire an employee.

Which direction would you prefer we take with Ligne Bretagnes?

I look forward to seeing how people vote.

In other news, you’ve probably noticed that the blog has changed its look! I’ve been meaning to spiff it up for a long time now, to make it better match the website.  Since we’re talking about polls, cast your vote in the poll up in the top right to let me know what you think of the new look.  The two biggest changes are the re-instatement of the comments system, which had been broken for some time, and the new “Popular Posts” category over in the right-hand column, where Blogger will automatically post links to entries I’ve written that were most visited.

Nope, that's option #1. Option #2 continues production much as it is now, with a mixture of all the lines.

does option 2 imply a greater output of TB's & goblin's

Aha! I knew I forgot something – I didn't have any links back to our main website from here. I just added a simple link under the title logo that will take people to our site.

Hi Trever, as usual I can't decide and voted for two options: keep the quality and output, increase prices where a fancy finish is in place to do, and when a simpler finish will look good enough, do that and price a tiny notch lower. This would mean at least one price level more, but as it is depending on amount of finishing work, it should be easier to decide than other criteria.

Concerning the blog style: the sober blue-grey will take some getting used to, and whither did the link to your shop-website vanish?

I always thought they were under priced.

The LBs are wonderful pipes in my experience thus far with four in my collection and one on the way, but I'd love to see more Talberts. And not necessarily just free-forms, but your terrific interpretations on traditional shapes, perhaps taken to a higher level than what the price range of LBs will allow. I'd certainly be willing to pay the additional money, even if they start from LB stummels.