I hope to put together a report on the CORPS show soon, but at the moment I’m still waiting for a couple of photos to come in. We stupidly forgot to take our camera and thus have no record of our weekend, other than some vague drunken memories of Jeff Folloder dancing in the fountain in fishnet stockings. In the meantime, lacking photographic evidence, I want to write a few comments about an odd new phenomenon, the e-pipe and e-cig. Here are mine: 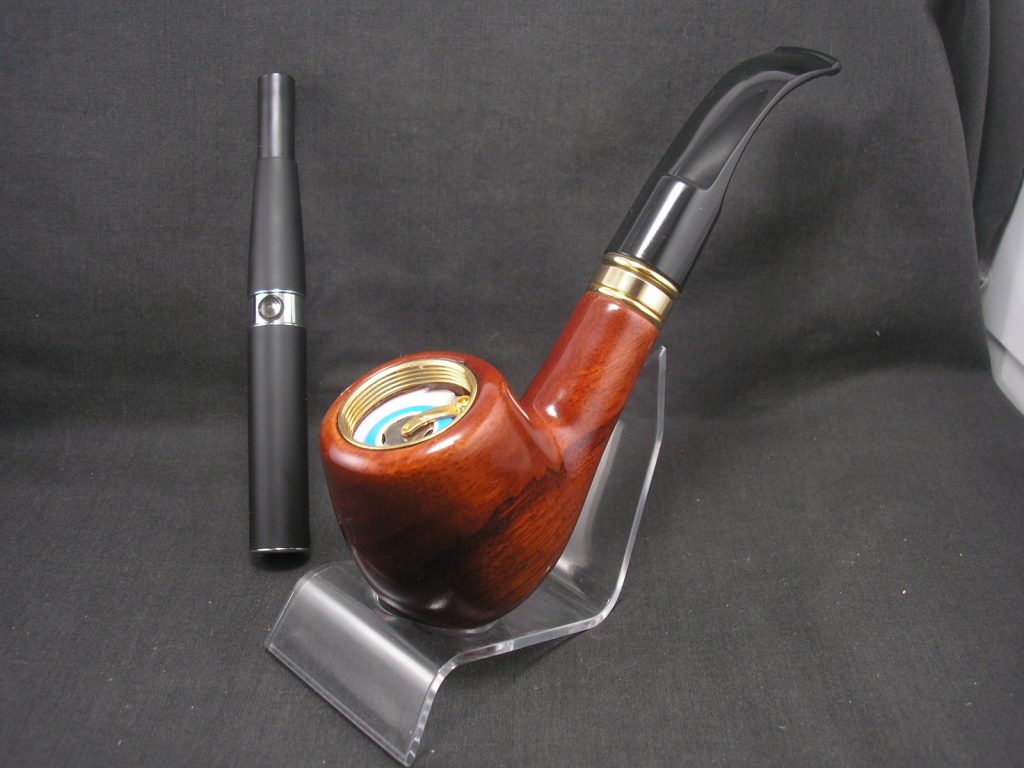 These two unusual devices in the picture above are for smoking – Yes, smoking, but not of tobacco nor any other combustible weed.  They’re e-smokes, part of a new wave of high tech toys that allow us to enjoy smoking in more places and without the health cautions of tobacco.  In the background is my Janty eGo, a sort of electronic cigarette/cigar that’s simple, extremely convenient, and very reliable.  In the foreground is my DSE601 epipe, a more familiar but less likable device.  Both work just like pipes – You put them to the mouth, puff, and enjoy flavorful smoke, but that’s where the similarity ends.  Here’s a look at their insides: 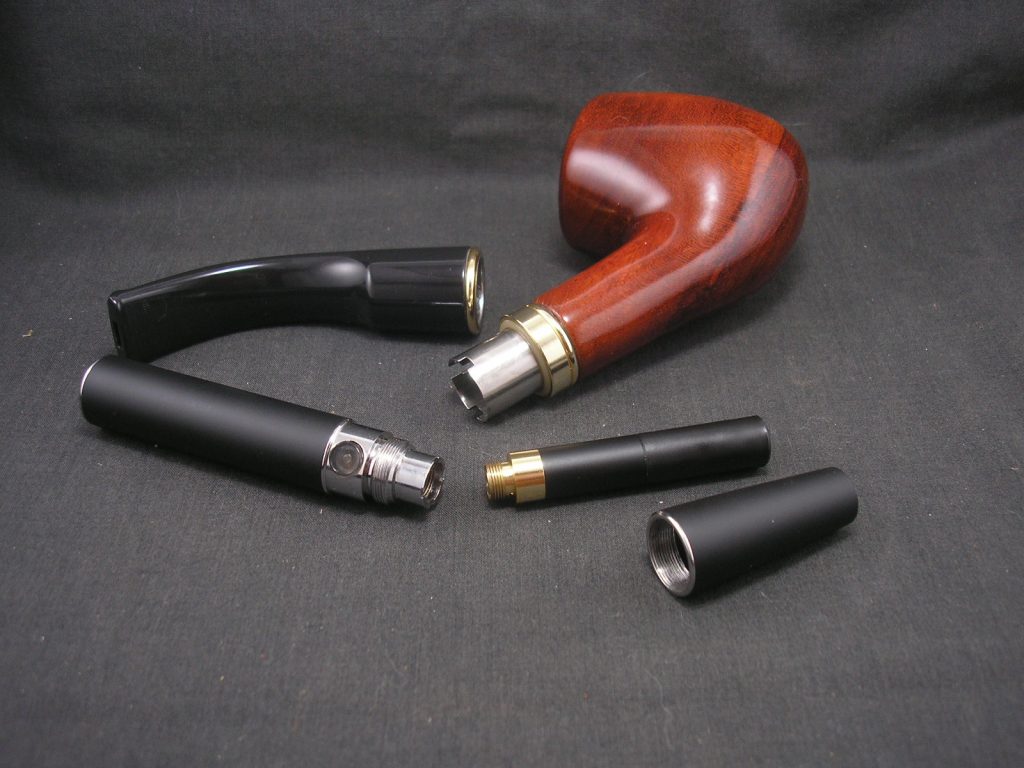 The bowl of the pipe contains a rechargeable battery.  In the base of the shank is a tiny atomizer, which heats up when called to by a flow switch in the bowl that detects puffing.  Cartridges filled with mesh insert into the shank, much like a 9mm filter, and seat down onto the atomizer.  One buys blended flavors in liquid form from a variety of micro-blenders, just like in the pipe tobacco world, and drips droplets of these liquids into the cartridge mesh until it’s soaked.  Then, the atomizer does its magic and the liquid becomes flavored vapor – Not smoke – that is enjoyed by the smoker.  The Janty is similar.  The long black part on the left is the battery section, then on the right we have the small brass atomizer and the mouthpiece components.

There is currently a great deal of media hype about these devices, with stories ranging from, “The cigarette smoker’s solution!” to, “OMG! DANGER DANGER THEY WILL KILL YOU!”  In reality, the reputable blenders use FDA-approved flavoring ingredients in their FDA-approved liquid bases, which produce nothing but already-declared-safe vapor mist, the same you will get from fog machines.  It is true that you can put any liquid in there that you want to, and fry your brain smoking drain cleaner if you like, but you can do the same thing with any product from the local pharmacy, so the media scare tactics about the “dangers” of these devices are pretty facile.


So what are they like?  In my opinion, pretty enjoyable.  I do not expect them to replace cigarettes or cigars or pipes, but I do think they are a handy alternative hobby/toy to enjoy in many circumstances where a briar pipe would be inconvenient.  I can drop the Janty into a shirt pocket without setting myself on fire, and pop it out to smoke for a few minutes without any need for filling, lighting, etc.  No ashes to deal with.  In fact, no by-products at all – The vapor mist dissipates quickly and usually leaves behind only a minimal scent of whatever flavoring you were enjoying (At the CORPS show, I smoked an aromatic banana-caramel-waffle blend, and our end of the table smelled like sweet breakfast food all weekend).


I give the Janty much higher marks than the epipe, which is a very tepid piece of work.  It worked wonderfully in the beginning, but performance has degraded sharply with use, and I’m told that they tend to stop working after a month or two if used heavily.  The atomizers in the devices must be replaced periodically, because they wear out, but engineering is key here – The Janty atomizer is easily replaced for $9 and mine thus far shows no sign of wear, whereas the epipe’s atomizer replacement costs $40 (!!).  When my epipe gives up the ghost, I do not intend to replace it, but I think my Janty is going to become a permanent part of my smoking hobby.  It’s just my personal opinion, but I believe that Janty may well become the Dunhill of the e-smoke market.


This has run a bit longer than intended, so I’ll sign off here for now.  If anyone has specific questions, let me know via comments or email, and I’ll do my best to answer them in my next post on this subject, where I’ll also talk a little about the various flavors, blends, DIY possibilities, and the very likely potential that there may be a handmade Talbert epipe in the future, done to my standards and aesthetics.