A Tale of Three Browsers

So, I have just finished my month(s) long work writing our new Talbert Pipes website from the ground up.  It won’t go live until the workshop is running and we actually have some stock to put on it, but at least that’s one big chunk of hassle done with.  There will be a few new features, like the centralized main page that groups my latest blog headlines, site news, and Twitter feed all together, and also (finally) a basic online payment and shopping cart system so people will no longer have to email me to buy stuff.

In the process of building this site, I have come to fully understand why web developers hate Internet Explorer, especially the older versions.  I’ve done my best to make the site work in all the main browsers that my site specs tell me come visiting (According to the web stats, half my site visitors use Firefox while the next big chunk is IE 7+, then a mixture of Opera, IE 6, and Safari).  However, the experience has brought me face to face with what developers rant about, namely IE’s lack of standards compliance, meaning that I can use a certain set of internationally standardized CSS tags and they will work for ALL other standards-compliant browsers, but not IE.  IE requires its own customized tags, dating from the days when Microsoft thought they were going to control the web the way they had dominated the desktop, and believed the best way to do this was to force the entire web to bend over to accommodate THEIR specialized requirements instead of simply making their stuff properly standards-compliant.  Ugh.

I’ve done the best I could, given my limited knowledge of site coding, to create a site that works equally in the major browsers.  It’s a bit of a different experience, though…  Firefox and Safari and other browsers built off the same code definitely get the best appearance due to their use of text effects and background transparencies.  The IE version is a bit hobbled, though from what I hear, the next IE should fix some of these issues…. Then again, I’ve been hearing that since Windows 3.0.  Opera does fine except for the curious quirk of not displaying the sidebar transparent background at all – Still, it works, and at this point the pressure really demands that I turn my energies to getting stuff on the site and money coming in rather than spend more time fiddling with Opera-specific settings.  Here’s a little comparative preview of the new site’s redesigned Gallery, with the view from each browser – Firefox and Safari first: 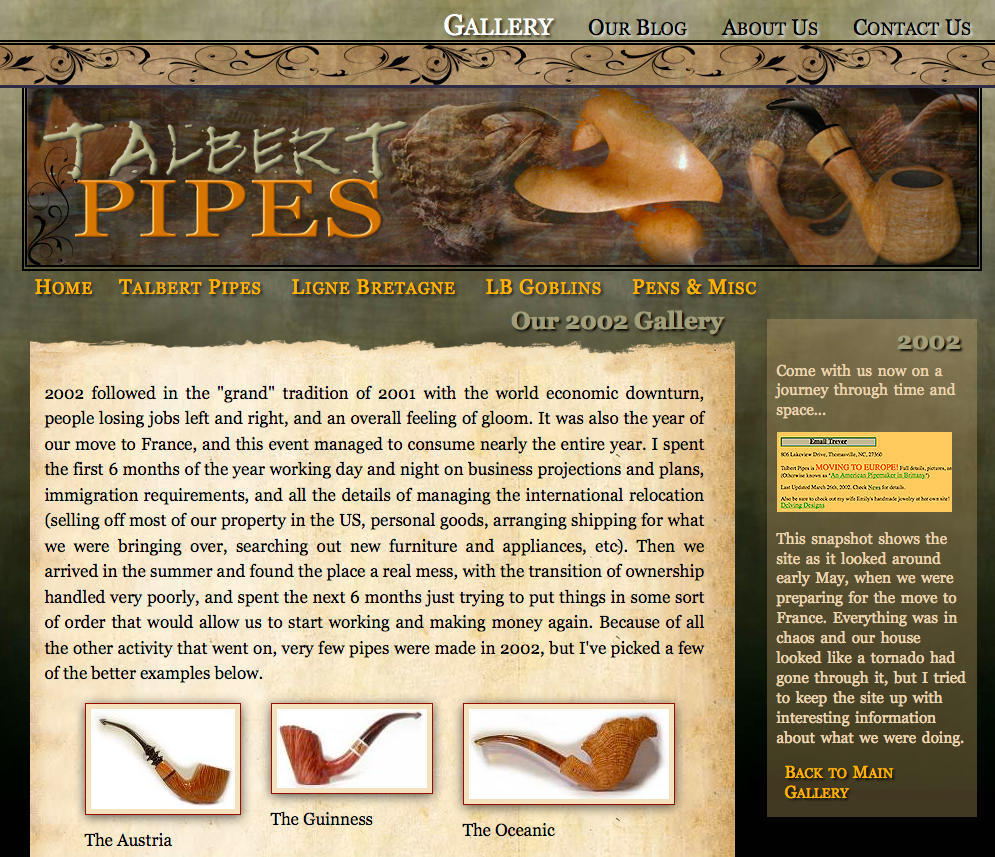 To contrast, here is the IE version: 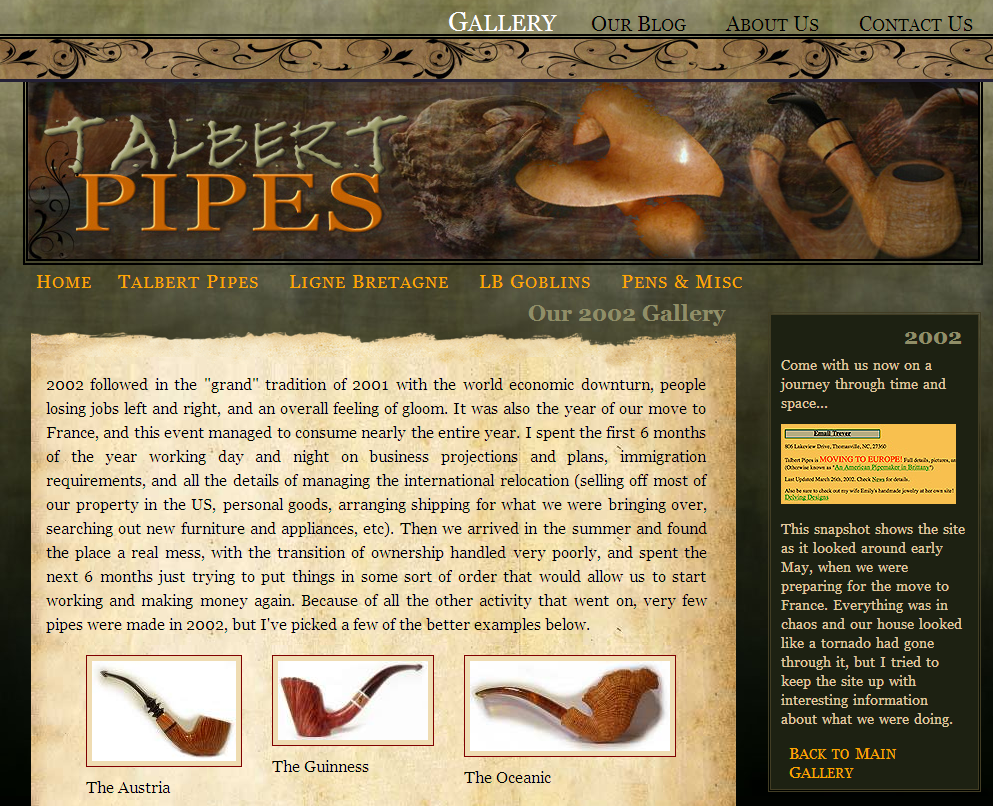 And here is the Opera view, with most effects in place but no sidebar background.  It isn’t really needed, it’s just a bit odd: 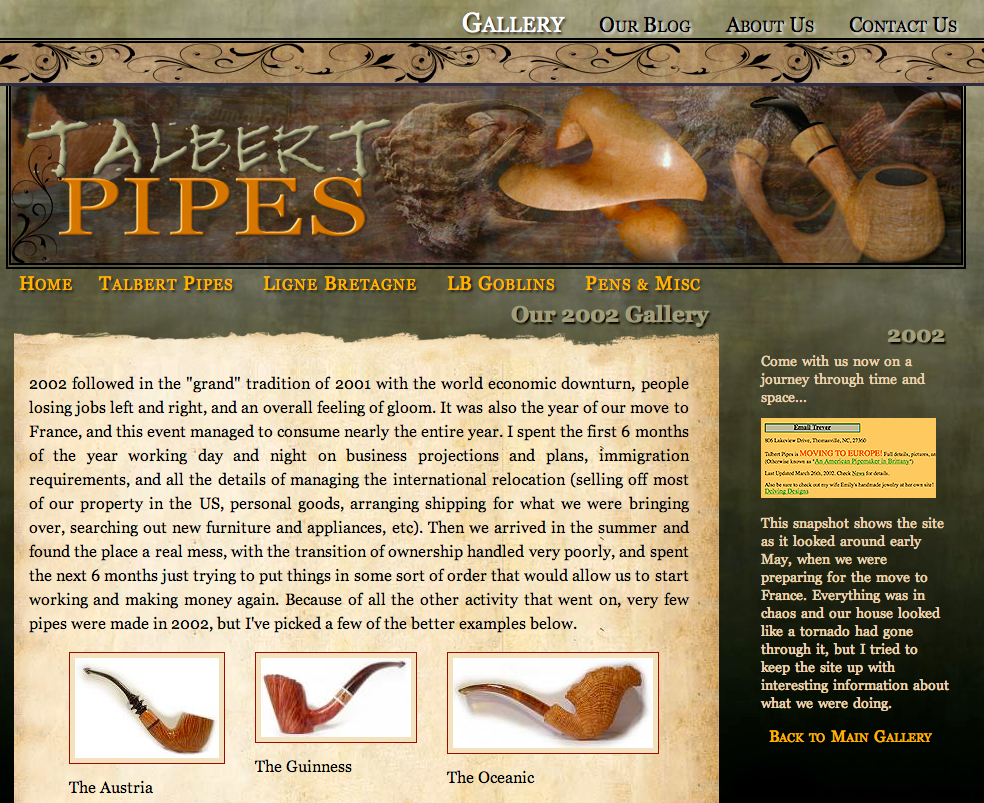 For the Gallery, that little sidebar extra will contain a Wayback Machine link for each year, allowing gallery visitors to not only look at my favorite pipes from a given year’s production, but also to visit the Wayback Machine’s cached internet archive of what our website looked like at that time.

Congrats on finishing the site. It looks terrific.