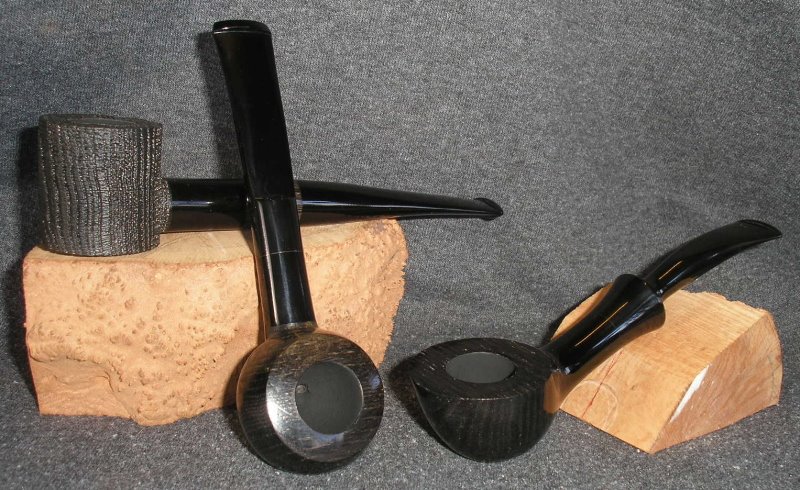 Note – Of the pipes previewed in this post, both Ligne Bretagnes are now sold, and so is the morta poker. The two remaining mortas will be posted on our website catalog in a day or two.

Quiet time on the Talbert Pipes website and blog does not equal relaxation time for us. Unfortunately. It seems like a very long time since I last had the chance to update the site or blogs, but the workshop has been humming. It’s odd, too, given the global recession this year, that our sales should be improving. It almost seems that we’ve run about six months to a year ahead of the news media-induced “state of the economy” – That is to say, we first noticed an inexplicable drop-off in business in the Fall of 2007, long before news channels were squawking about the economic disaster round the clock, and the sluggish sales continued through a good chunk of 2008. Now that the media has finally realized there is a business crisis on hand, our business has picked back up a good bit. This is not to say that we’re in any danger of becoming wealthy any time soon, but at least we can afford to buy food now, which is a great improvement!

The three morta pipes above were all just finished recently, but I haven’t had time to post them to the catalog yet. I’m actually trying to decide what to do with them, whether to sell them direct or send them to a dealer, as we have a couple of dealers with orders in-house now. If anyone wants one, feel free to email me for info – prices are as always, 209 € for the sandblast or 229 € ea for the smooths, plus VAT and shipping if applicable. I’m particularly fond of the “fat prince” in the middle – It has an extra-thick bowl shape that is very broad and round, with a beveled rim instead of a flat one. The sandblast poker was done for an order and may or may not be sold, I haven’t heard back yet.

In other news, I finished the two Ligne Bretagne billiards that were treated with the process I described in a previous post. Both came out smooth, and quite nice: 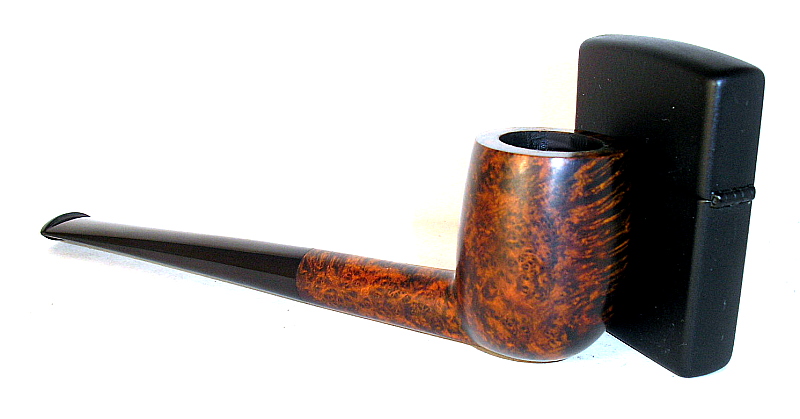 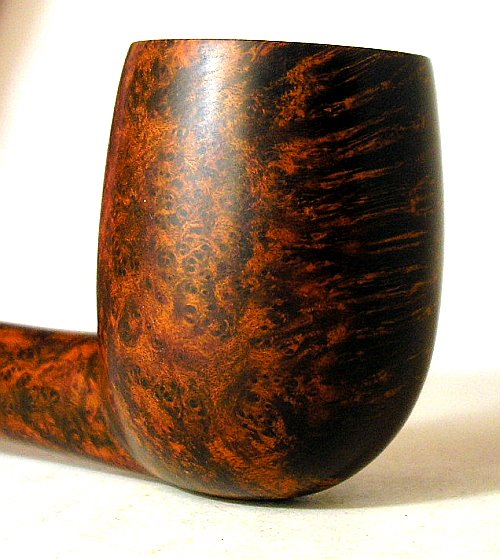 Again, here are two pipes that I have not yet decided what to do with. I’d rather sell them direct than send them to a dealer, because I want to be able to get direct feedback on their smoking quality due to their special treatment, but I just haven’t had the spare time to stick the pics together and post them as catalog entries. If anyone is interested in either of them (The first two pics are of the “gold root” one with a strong grain contrast stain, and the third pic is of the other pipe, in red-orange with a marbled white stem accent band), just let me know. Despite a greater amount of labor time going into them, these treated pipes are the same price as normal Ligne Bretagnes for now – 123 € each, plus VAT and shipping as needed. Note that I have yet to develop a cutesy marketing phrase for this process, nor any special marking, so for the time being they are indistinguishable from normal LBs.

Thank You very much, Mr Talbert. ASAP I send you a email whith some photos and dimensions. Thank again.

I am happy to do pipes to order, if there is a specific shape or look you are after.At this time, the waiting list is a bit long, but if you email me some specifics, I will be glad to make a pipe for you.

Hi, Mr Talbert. I´m looking for a very very sandblast pipe (more than some old clasic dunhill). Furthermore, I love viprati´s method of oil cured pipes. I make my own pipes but (I´m PhD) I don´t know how is sandblast or oil-cured process. Some of your pipes (f.e. Bull-Horn, or Bent Billiard-Monster or, especially, the The Poker-Monster, are very sandblast and has a special brightness (I suppose it would be oil-cured).
For two years ago, I can´t buy one of your pipes (I allways arrive late) What can I do?
Best whishes from Spain.

These are not oil-cured. I suppose I should stress that in my articles. It isn’t oil curing at all, it’s an entirely different process.