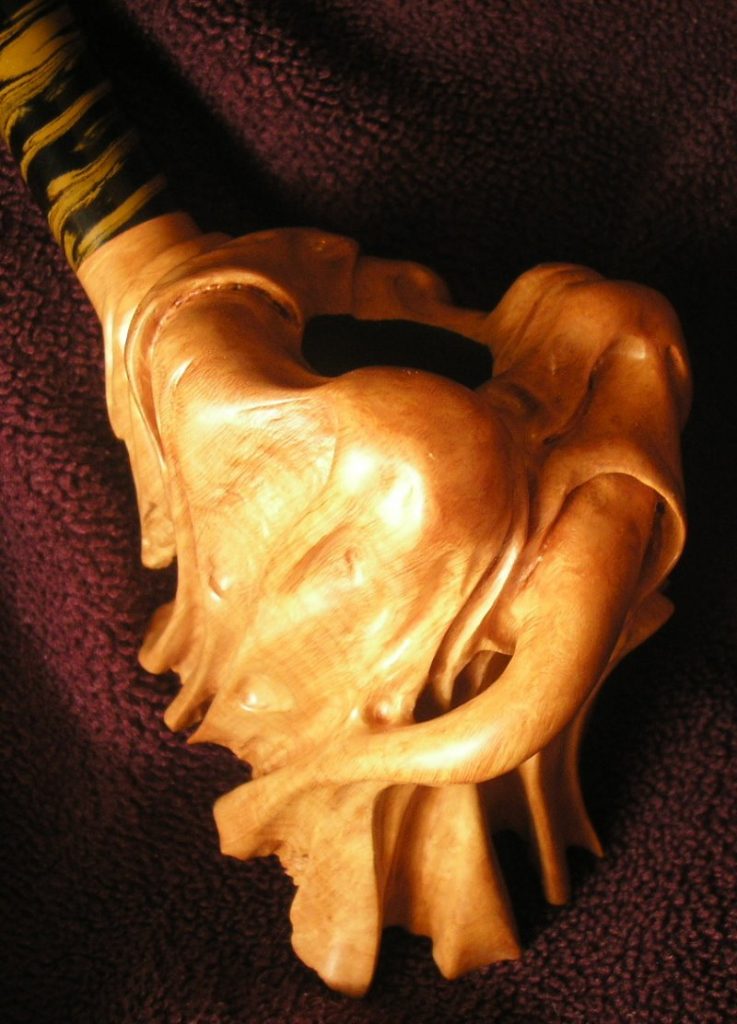 Biz News – There is one new Ligne Bretagne posted, a piece with an interesting backstory, which I’ll get to after I talk about the star of our show…

Well, this has certainly been a long time coming! I first posted the sketches and the idea concept for this pipe on November 14th, 2008, and here is the original sketch again: 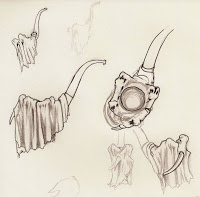 The idea was to make a “Christmas Ghost” – something on the technical level of the best of the Talbert Halloween pipes, but a bit more subtle, trading subsurface unease for direct scariness. The initial sketches centered around the idea of something Very Unpleasant under a sheet covering, an idea that I liked very much but had a few misgivings about, including what to do with the sides, which would look fairly dull if they were simply slab-sided draperies. I worked hard to give the sides of the actual pipe a bit more “snap” via more motion, more curves, and the addition of light sandblast texturing to enhance the appearance of something living beneath the sheet. 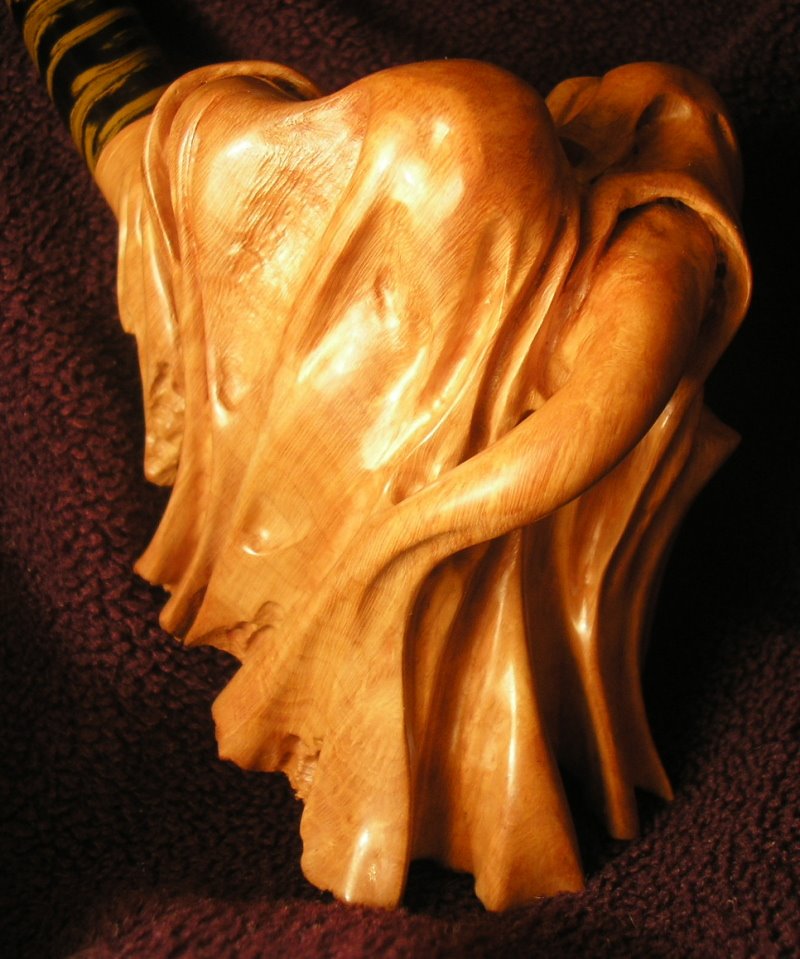 When I posted the first sketch, I received a small pile of orders for Christmas Ghosts, and foolishly took them all. Unfortunately, it has been long enough since I last worked on any pipes of this complexity that I’d totally forgotten just how long it takes to get one finished, when one has to account for the vagaries of briar, unending sanding time, and the need to break the work up and finish simpler, quicker pieces in the meantime to keep the cash flow going. In the end, where I’d hoped to have a set of pipes by the end of December, I was actually only able to make ONE by the end of January. 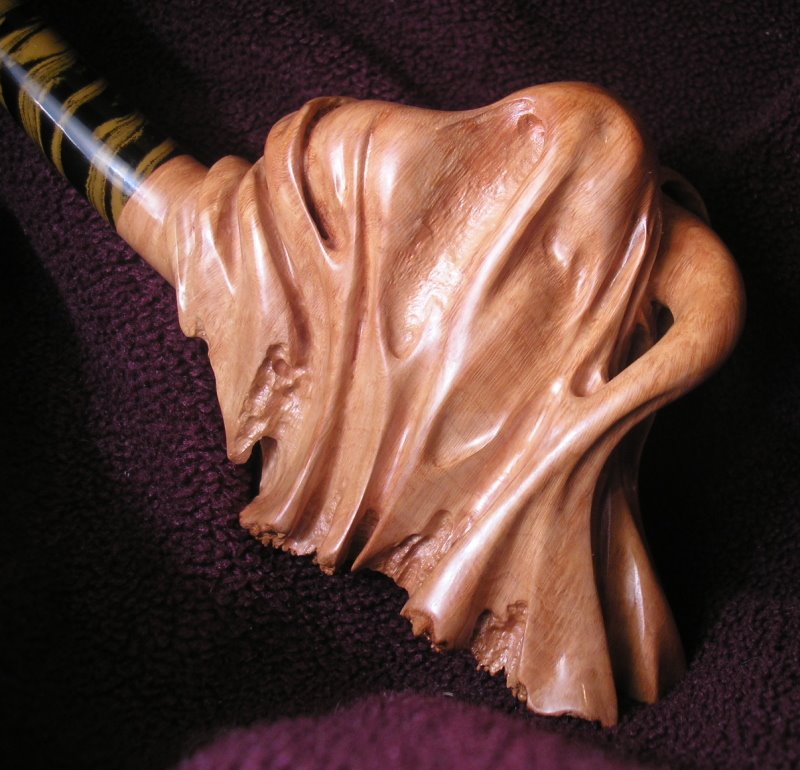 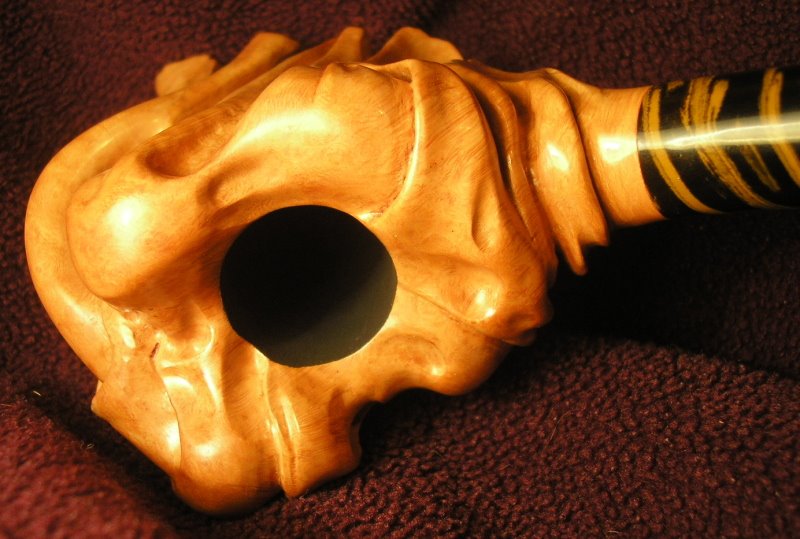 I haven’t fully decided what to do next, whether to tackle the other orders or roll them over to Christmas 2009 (At the moment, I’m simply making my way through the request list until this one is sold). 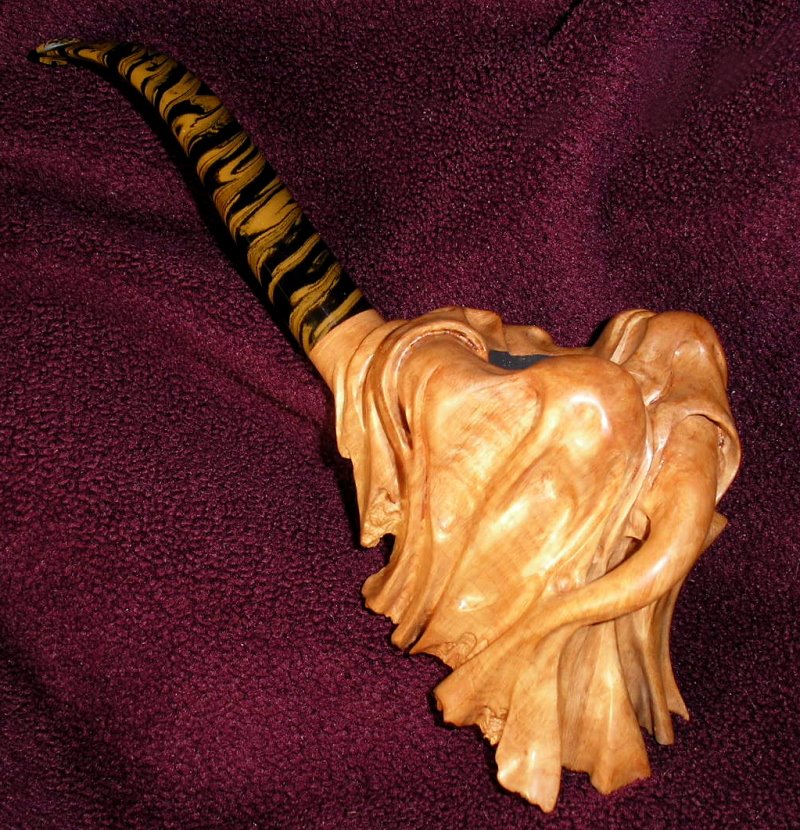 I have to say, this has been a real joy to work on, despite the time and sheer bloody-mindedness required to see the final sanding stages through to the end (Carving briar is NOT like carving meerschaum, sadly enough!). Money, time, and stress have forced me to spend most of these past few years working on simpler pipes for quicker finishing and income, and it was a real joy to tackle a project where I could go all-out, without worrying over whether it would be too costly or not sell or all the other usual worries. I realize this isn’t going to be to everyone’s tastes, but if I had the choice, I’d probably make nothing but pipes like this all the year round (Amendment – If I had the choice AND the ability to live comfortably on $12,000 a year…).

In other news, and probably really anticlimactic after all the splashy pics up there, but there is a new Ligne Bretagne billiard posted, the first of ’09. And it’s a special pipe too, for totally different reasons. For many years I have been working, on the side, to develop a process of briar treatment that renders a “tuned” smoke – that is, a smoke that helps to accent specific types of tobacco. I’ve made dozens of testers over the years, and eventually sold a few for private orders to buyers who really liked the flavor of the process, but this is the first one (IIRC) that I’ve posted for open sale on the site catalog.

The briar treatment is not a magic bullet or any marketing nonsense like that – What it does is to render a smoother and creamier flavor to Virginia tobaccos. Simply and concisely. I find it takes the sharp edge off of biting Virginias and gives them a more blended flavor, though it does require a couple of smokes to break in. In any event, I’m confident enough now in the process to start selling pipes treated this way, and here is the first!

Talbert historians may be amused to know that this technique got its start with me in ’98, when I gave an early treated example to a friend who reported back that it became his favorite pipe for VA/Perique blends. This intrigued me, and I’ve spent a good chunk of time since fiddling around with the idea, and working on ways to make briar better suited to specific types of tobacco.

As usual, I’ve put the product-testing and quality assurance part of the work before the marketing and branding part, and still have no real plans about how to mark these pipes, what to call them to set them apart, or whether to do large volumes of pipes this way or not. It does add a fair bit of extra time to the making of a Ligne Bretagne, so I’m not altogether sure this will even continue to be feature of our entry-level line – Time and sales will tell, I suppose. LBs are a good way to get pipes with this treatment out into more hands, however, for reviews and commentary on the briar treatment. I’ve already got two other LB billiards like this partly completed, both smooths and both treated with the same method, and they should be going into the catalog as soon as I get a few free moments to finish them up (or sooner, if anyone wants to lay claim to one).

That would require a very substantial amount of microwave popcorn. Like, perhaps, “All of it”.

Absolutely stunning. Will you trade for microwave popcorn?

Way cool buddy. You really outdid yourself with that piece. i bet its a marvel to hold.