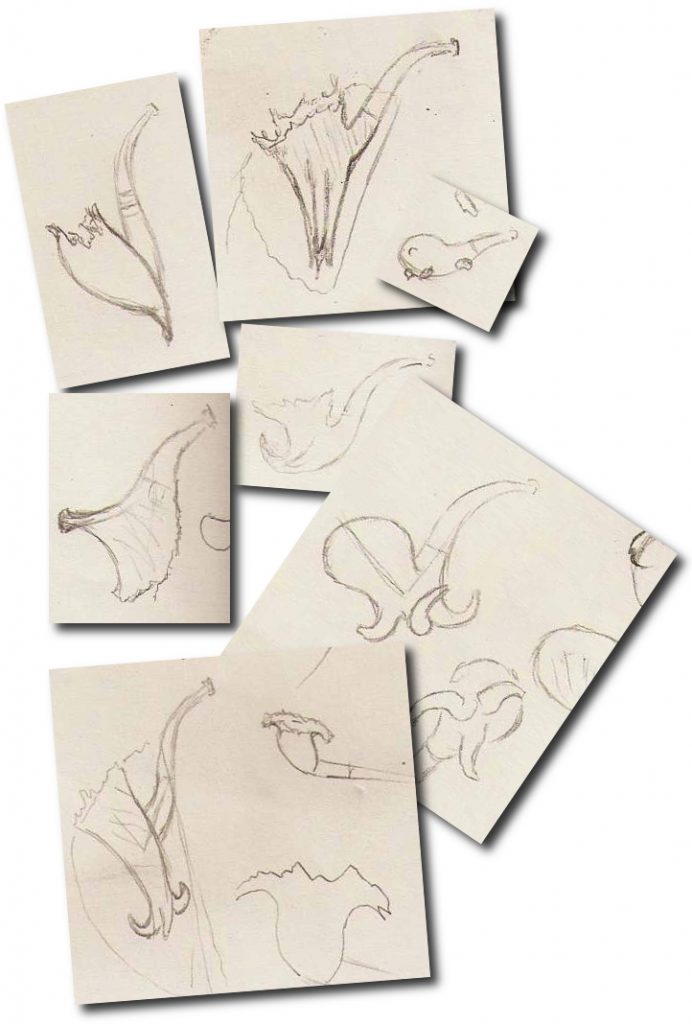 Biz News – There is one new Goblin posted, finally! More to come, I promise. Also, I recently posted the fiftieth Ligne Bretagne pipe for 2008. I can’t believe I’ve made fifty LBs this year!

Here you can see some scans of a few sketches I’ve made for this year’s batch of Goblins. Ideas range all over, from the cute to the decidedly sinister (The pipe in the top sketch is more likely to become a Talbert Halloween pipe than a Goblin). The little fat creature with legs reminds me of something from a Miyazaki film. Several sketches can be seen as completed pipes in the photo below, showing the three most recent pipes in the final stages of their finishing. Alas, only one of them is currently finished and posted – BOTH of the others have been unbelievably fussy and problematic and appear determined to fight to the last against ever being finished. Yet more are in the pipeline, though, and I hope the newer ones will be more pleasant (and at this rate, they may be done before these trouble-prone ones are!). The sad part for me is that now it is virtually impossible that any of the new Goblins will be done and posted before Halloween, when I had hoped to be posting new Goblins every few days for the last half of this month.

This month….. Gads, this year. What a horrible year this has been, easily the worst since the year of continual disasters (which actually lasted about 2.5 years) following our move to France. It already seems certain that 2008 will be another year of no Christmas presents, this time not for each other nor anyone else we know, sadly. Unfortunately, the news of the world suggests it’s going to be a while before things get any better – There’s nothing like trying to hold to your standards and create a high-end luxury item during times when everyone is ducking and running for cover as banks and financial pillars crumble left and right. I’m left to wonder how Alfred Dunhill felt during the war, except that today, it looks like bank foreclosures rather than German bombs that will force us all out onto the streets to sell pipes from fold-out tables.

Now that I’ve gotten a few Ligne Bretagnes into stock, once these current Goblins are finished, the next big project I want to tackle will be more Talbert Briars – nice Talbert Briars, some quality examples of the best work I can do.