The Halloween Pipe that wasn’t 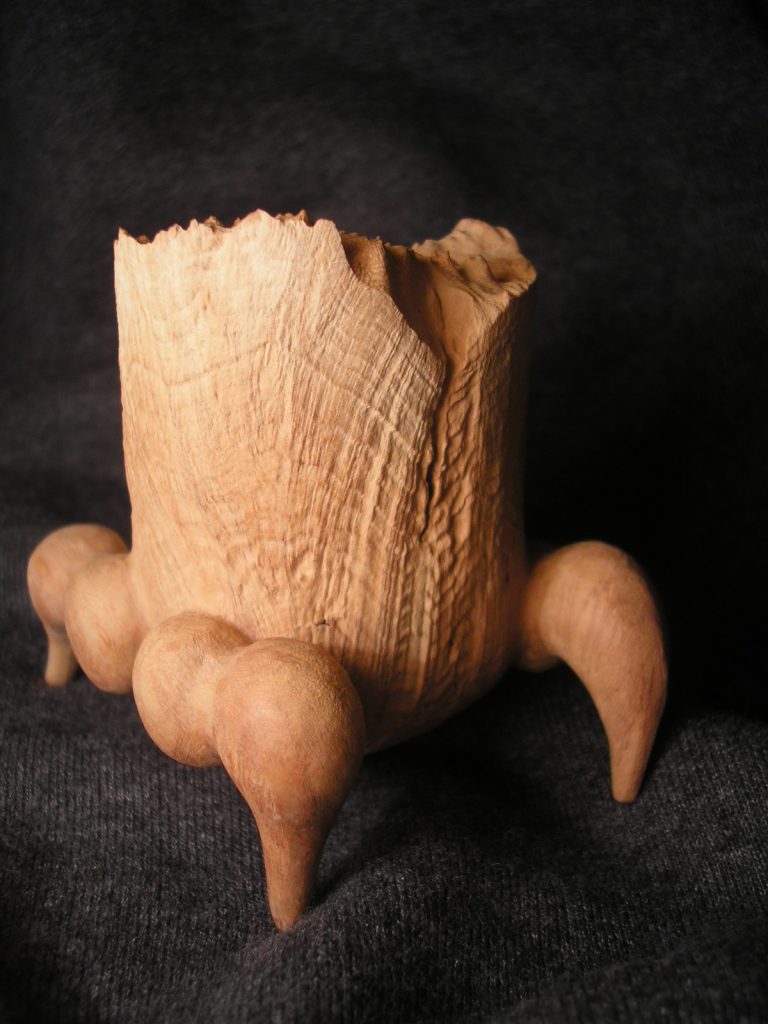 There’s another Goblin posted. As I write this, it has already sold in-between the time that I posted the catalog page update and wrote the brief News page update to announce its arrival. I realize that must seem like an awfully pitiful product for a week of work – one single Goblin – but words fail to describe what a financially disastrous week this has been, in terms of both money and lost working time.

In the pic to the left, you can see a Halloween pipe that might have been – Something I’ve been working on in hopes of posting this month. I’ve still got another couple rough-shaped, but I don’t think my odds are great of getting them done in time. This discarded one is a classic example of the sort of hidden faults that can lurk inside of any briar block, no matter how “perfect” or “flawless” the exterior might be. This is also a great example of why I’ve often said that for all the fluff about sandblasts being “inherently flawed”, they are actually much more likely to be structurally flawless than smooths, because these kinds of epic, “just under the surface” failures would be exposed and seen rather than lying in wait.

This pipe looked flawless. The briar was excellent quality, pits were minor to nonexistent, and it gave no indications that it might have any serious problems. The design idea was to make a more complex, more sophisticated, and generally more creepy version of some of the “walking” Goblins, but in full Talbert Briar Halloween complexity, with a curling, scorpion-like tail stem, hand-shaped to arachnid design, with detailed legs paused in motion, one raised to move forward. It would have been smooth and very black, with a massively deep contrast-black stain that I’ve been working on and have dubbed “Sinestre”- very dark yet still with contrast enough for visible grain.

Unfortunately, while sanding the front of the bowl round, after much carving and shaping, I exposed a small pit. More sanding enlarged it, and within about 2mm of sanding, it opened into a fissure within the wood which could swallow most of a test needle. So much for that pipe! This sort of dramatic briar flaw means days of lost labor, a 700+ euro hole punched in the month’s income, and the general desire to hurl things across the shop. Grrr. One can only hope next week will be better!

It might split. The flaw runs very deep into the wood. It would be possible to fill the flaw with glue and it would probably smoke perfectly ok for a lifetime, but alas, that isn’t the Talbert Briar way. Someday if I have some spare time I may finish it up for myself because I’m confident it is structurally sound – it just isn’t “collector sound”.

How does that work? Does the fissure mean the pipe will crack under heat of use, or is it a purely aesthetic issue? I’m assuming not the latter, since I’d imagine you’d be able to work those into the design somehow when discovered like this. I love the idea in any case. Very sad.

Don’ lose your sleep over it, Trever. The next briar will be perfect. Keep it up!