Staining Fun, and one available Bullhorn 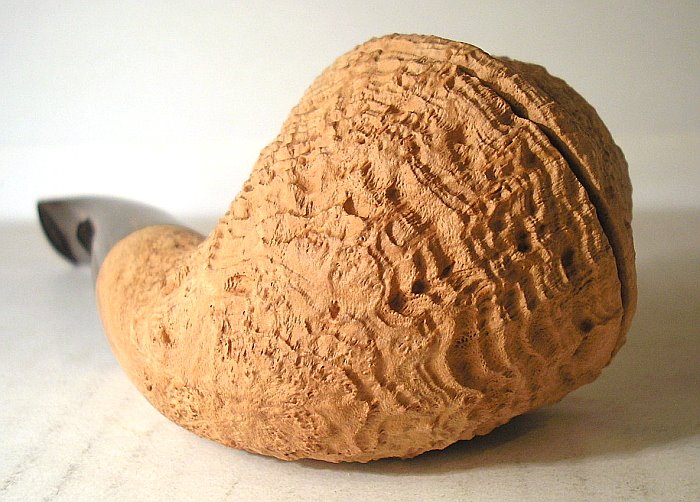 We’re still working on the Israeli pipes here, but are very close to finishing up that project and should soon be back to our normal output. I have managed to produce one extra Bullhorn for sale, however, if anyone is interested. Like the mortas of last week’s blog notice, it’s a sideline piece that I haven’t really decided what to do with yet…
Note – This pipe is now SOLD 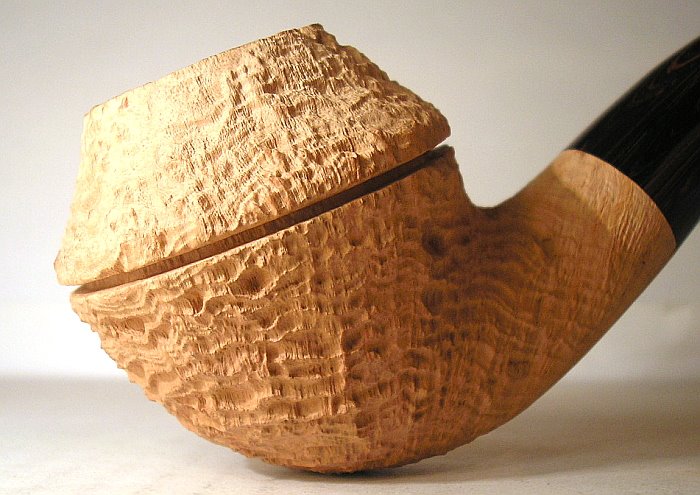 In other news, one of many side-projects that I’ve been pursuing is coming to fruition – that of working out the steps of my own personal contrast staining techniques using natural, easily obtainable materials instead of some of the complex chemicals that are often used for this purpose. It’s actually quite similar to a process currently being discussed on the Pipemakers’ Forum, but using slightly different ingredients and an extra step to help curtail the “greening” effect that often occurs when gold colors are applied over blue-black grain contrasts. Here’s an example: 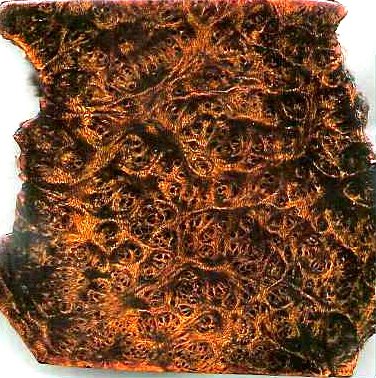 It isn’t as sharply gold & black as Tom Eltang’s finish, but I didn’t set out to copy his techniques in any event, rather to work out my own personal methods. I think it produces a really nice effect overall, especially with the three-dimensional aspect of the grain (This sample is perfectly flat and glossy, even though parts appear shadowed and textured). Look for this finish to start turning up on Talbert Briars in future – Between the improved stains and some changes in finishing techniques, I believe the smooth Talberts will be improving by a quantum leap in attractiveness.

… And then there is the other side project, developing some perfect greens! Somewhere, the rule was written that all high grade pipes must be either natural, gold-orange, red, brown or black, with no other colors allowed (Probably out of fear of being confused with the myriads of candy-colored factory pipes on the market, all of which are somehow supposed to attract “youthful buyers” with their neon-zebra striped coloring). I think I’ve managed to take some serious chips out of this rule with some of the variations of green that I’ve been selling over the past few years, and I hope to make an even bigger impact in the year to come. My goals are simple – a range of green finishes that display grain excellently, that have visual impact, that retain their depth of contrast for the life of the pipe, and that have much greater visual depth and complexity than the commonly-seen bright greens of gimmick pipes. Here’s one of the current test strips: 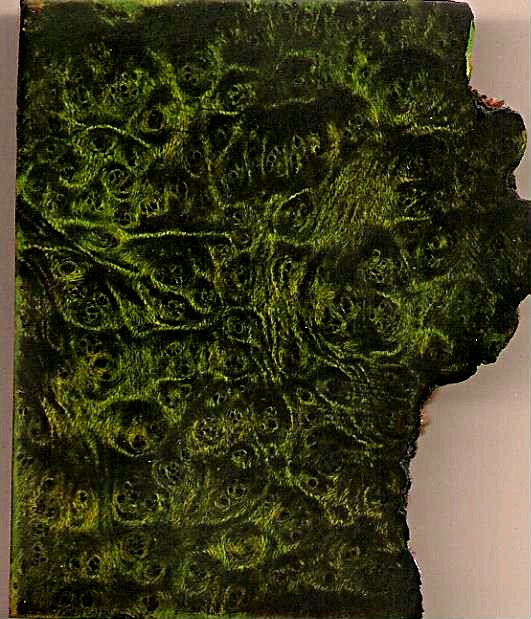 I think it looks quite nice, with really strong contrast in the grain and an attractively rich green shade. I look forward to seeing some smooth finished Talberts in this color. I’ve also continued to work on my ideal green-brown, earth-toned green, but it doesn’t scan nearly as impressively despite looking “richer” to the eye – It doesn’t have the strong contrast between bright colors and black that these two do, so it seems to be a bit of a wallflower by direct comparison.

I really think green pipes are cool! I love the grassy, earthy feel of them. The costrast you’ve gotten is really cool.

Keep up the great work!