Emily has a side project 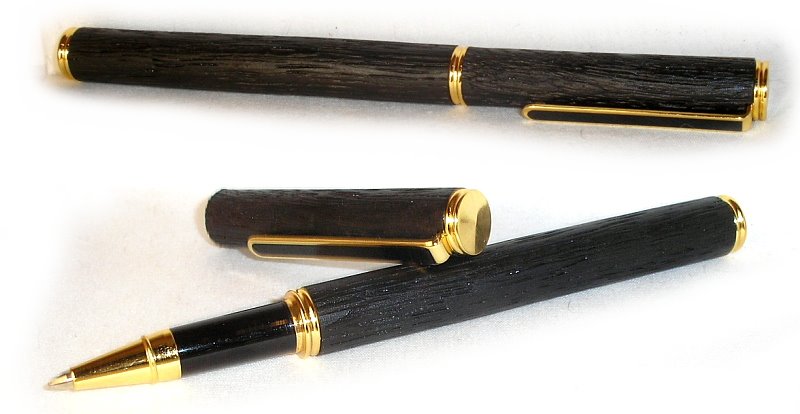 No pipe news today, but news of a related sort. My wife Emily has been working diligently for a while now to learn the art of pencrafting, and she in turn has been teaching me what she’s picking up. When we first purchased this house and workshop back in 2002, the previous owner had divided his work equally between pipes and pens, and we got a huge quantity of pen parts and pen stock with the purchase. It put us in an odd position, since we’d had no previous experience in penmaking. We did, however, have a lot of basic, roughed-out and partly finished pens built around one of the previous owner’s designs, and for some time after we arrived here, we did a steady business in finishing and selling those existing pens in our shop. However, we never really considered them “ours”.

Once the semi-ready parts were used up, we suspended penmaking for several years and just focused on pipes, since we had enough pipe demand to occupy all our workshop time anyway. But I’ve always had in the back of my mind a desire to branch out a little, and work on creating some other high quality (and distinctively “Talbert”) handmade items, and pens are a natural project. So, Em has been learning what she could in her spare time, and we ordered some basic pen kits to help us get a good feel for how a pen is put together, how to get use from our existing stock, and how to essentially produce a series of pens that were all ours.

What you see in the photos here are the first couple of results that Emily has produced in her spare time. As artisan pens go, these are just starter items, done to learn-as-we-go and built around common pen kit plans – the equivalent of the typical hobbyist’s first pipes built off of pre-drilled block kits with attached molded stems. But still, I’m quite happy with them, like any craftsperson who suddenly sees something new appear fully finished out of a collection of parts and raw supplies.

These pens bring our pipe experience into the craft in two ways – They’re made from French morta, for starters (the 3000 year old petrified bog oak found in our local parkland), and Emily had the bright idea to sandblast them. I’ve looked around a few pen sites and this sort of finish seems uncommon if not unknown, so I’ll be interested to see what sort of results we can get from different woods… especially briar. Imagine a pen girdled with growth rings! She used a larger grit media than we normally use for pipes, to give the blast surface a smoother, more undulating texture rather than making it sharp and edgy – not an appealing goal for a pen surface. I wasn’t sure how they would turn out, but so far I find them excellent – smooth enough to be comfortable to hold, yet textured enough to feel interesting and to offer a lot of “grip” in the hand.

We’re currently going to be beating on these and future creations, to see what breaks, how the finish holds up, etc, in regular use. This is a fair way from being a commercial project, but don’t be surprised if eventually the website gains a “Talbert Pens” section where Emily can go wild (and me too, of course – I already have some quirky ideas for a Halloween pen). In the meantime, as I did with my early pipes so long ago, we’ll be turning out a lot of Christmas gifts for family and friends! 😉

I think that I will look at your website very often !

You know I have a birthday coming up!

Can’t wait to see what the Talbert workshop turns out. BTW, Emily’s first pen is MUCH prettier than my first pipe was. By a long shot!