A Tale of Two Princes 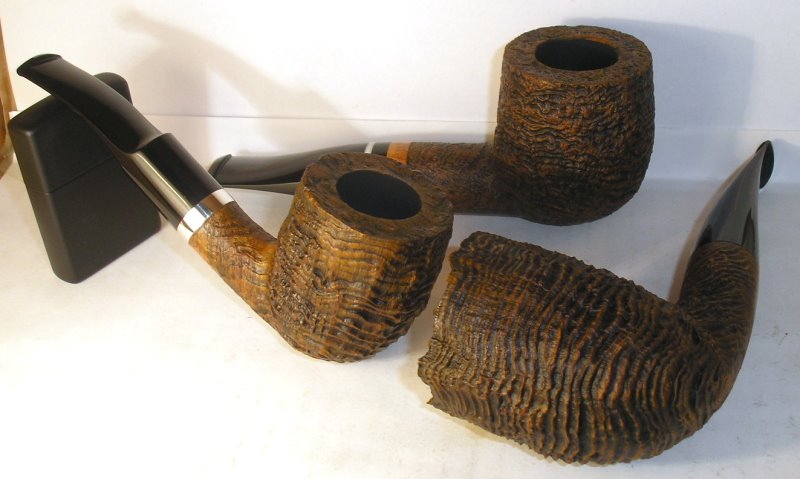 Biz News – There are two new pipes posted. I’ve just posted the first Ligne Bretagne Collector to be available in some time, and there is a new Talbert Briar sandblast also, the Chunky Billiard.

The pipes in today’s pic aren’t related to the subject, it’s just a handy shot I had of three recently-finished Talbert Briars in gold/brown contrast stain. The silver banded one is on its way to Israel, while the fat monster in back with the ivory ring is en route to Pipe & Pint. No, today’s subject jumps back to my previous blog post on my briar treatment experiments. I finished up a matching pair of Ligne Bretagne Prince shapes, one treated via a process I’ve worked out which delivers a very smooth, almost creamy smoke and which I find to favor sharp Virginia blends – it seems to take a lot of the bite out, for me. The other pipe was left natural and unaltered, for comparison. The buyer has been smoking both for a while now, and here is his report. Again, let me stress, these are two identical prince shapes made from the same briar stock and with the same aging. The differences in smoking are purely down to my treatment process employed. In his descriptions, the dark pipe is the one specially treated – the lighter-colored pipe is the unaltered one.

I loaded each pipe up with some perfectly dried Kendal Louisiana Flake. Picked the KLF because it has a mild flavor and only certain pipes bring out the best in this Va-Per mix. Fired up both pipes and smoked each for 5min for initial impressions. Both smoked cool and dry, great airflow. There is distinct difference right off the bat: the Dark Pipe has a mellower, almost creamy taste, whereas the Light Pipe has a stronger presence of perique. Half-way through the bowl the perique was more apparent in the Dark Pipe, but the flavor of the tobacco was still mellow-creamy and very pleasant. At half-way the Light Pipe had stronger perique spiciness, in addition to the virginia flavor, and had the distinct woody taste that new pipes with no bowl coating generally do. In bottom half of the bowls the differences between the pipes lessened. Probably due to the stronger taste of the tobacco concentrating moisture etc in the dottle. My overall impression of the difference between the two pipes was similar to cooking a bolognese pasta sauce or a bowl of chilie. When all the ingredients are added and cooked for a short period of time the ingredients are tasted as distinct entities, i.e. the Light Pipe’s spicy perique flavor separate from the virginia flavor. After simmering the sauce for some time, the flavors meld together and make a “complete” flavor, i.e. the mellow singular flavor of the Dark Pipe.
Day 3 & Smoke 2 Today both pipes were loaded up with Escudo, a favorite of mine. Again the two pipes had distinctly different flavors. The Dark Pipe had a mellower character like a long aged whisky and the Light Pipe had more of a kick from the perique like a young whisky (e.g. Laphroaig 10yr versus 25yr). Escudo has a distinct flavor in it that creates the body of the smoke, it is what I love about this mix. This flavor comes across differently in the two pipes: in the Light Pipe it is nutty and in the Dark pipe it is like carmel. Additionally, the plum flavor of Escudo is more pronounced in the Light Pipe. After the first smoke, I enjoyed the flavor of KLF more in the Dark Pipe. It seemed to soften the edges of the tobacco in a very pleasant manner. However, this time the Light Pipe brought out nuances in the Escudo that aren’t as noticeable otherwise. Which pipe to smoke at any given time might be choice between a hunger for virginias (Dark Pipe) or perique (Light Pipe)… Day 7&9 and Smoke 3&4 These comments are from two smokes as I didn’t have time to write up smoke #3. Both pipes were loaded up with Sam Gawith’s Full Virginia Flake. FVF should be good test, as it is pure virginia and a favorite of mine. The Dark Pipe brought out a nice sweet caramel flavor. A well rounded virginia flavor that I could smoke all day, presumably without burning-out my tongue as virginias sometimes do. A very good pipe for FVF! In the Light Pipe I’m got more a woody taste, a brighter, almost greener taste. Somewhere in there is a hint of spice, maybe cinnamon. There is a shade more tongue bit in the Light Pipe. The flavor regardless of what it is, is stronger in the Light Pipe than in the Dark Pipe. I believe I would smoke FVF in the Dark Pipe, given the choice. After the first handful of smokes, I couldn’t tell which pipe was “treated”. But I can say that I prefer the Dark Pipe for the taste of virginias. I will smoke it when looking for a relaxing, no concentration smoke. The Light Pipe will come into play when my hunger for perique is the order of the day. Also, the Light Pipe seems to bring out individual flavors, so I may use it when trying a new tobacco to get the full bouquet of flavors. Better, worse… neither, just pipes for different moods. And with that, I have no idea whether this log helps you out Trever! Of course, this sort of feedback is excellent for any pipemaker and especially good in the sense that these were not “gift” pipes or junk testers but finished, purchased pipes – ergo, with a lot less room left for “gratitude” in the commentary! I do think I may start offering this flavoring technique on special ordered pipes as an option. I’m not sure I want to do it across the board on all my pipes, but I’m certainly pleased with the process and results. If anyone would like to request a Talbert Briar or even a Ligne Bretagne treated in this fashion, just drop me an email and you can experience a different taste in briar!

Too neat Trever. I may have to order a set one day.

There was a Spanish pipe maker who used some essence of orange on his pipes. It was interesting, but …well if i wanted a darn orange, i’d have an orange. I never found a tobacco that really worked with the added dimmension.

The interesting thing with your project is that the results don’t really add anything to the taste, rather they seem to subtly bring out or highlight different aspects. Its not like mixing 965 with orange juice. It sounds like chosing just the right beer to go with your steak. Or wine, but I’m just not a wine guy, so its beer for me. Hey, I’m the first guy responding to Trever’s Blog. Am I living the High Life?

In my mind, I see Trever preparing the potion over a roiling cauldron, with runes scribbled on the floor. But I bet he just messes aroung in his kitchen.