Sandblasting stirs up lots of questions. Thankfully, I have my buddy Nick to actually ask the stuff that would make good blog topics! I thought it would be worth addressing because while there are lots of fans of “extreme” blasts out there, there isn’t a great deal of knowledge of just how various effects are arrived at, and the design trade-offs that must be made along the way in order to produce various effects. Many times I have seen someone criticize a blast, claiming, “It’s not even on both sides”, when in actuality, it’s perfectly even – It’s just that the grain isn’t the same. Other complaints often involve out-of-round bowls, shanks, etc… seemingly not really understanding that high pressure, deep blasting deforms by nature, according to the grain & hardness of the wood. Let’s look at some bowl examples:

Bowl A is your classic top-down view of a smooth pipe bowl, looking down into the chamber. Light sandblasting, as is done by the majority of blasters, retains this roundness and shape easily, as can be seen in B. It just doesn’t take off that much wood, leaving the shape very defined and obvious. This changes when we start doing the sort of very deep, very intense sandblasts that I and others do on our higher grade pipes – One literally begins to sculpt the wood by nature, altering it to nature’s inner shape (think of a “skeletal” structure within the wood), as seen below. 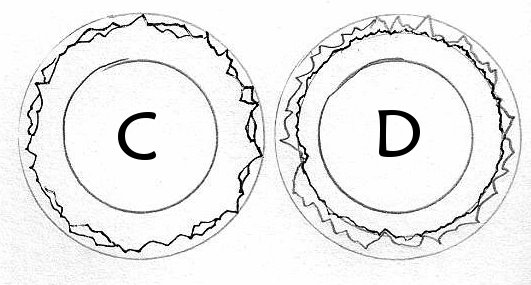 Pipe C is a good example of a deep blast and how it changes the bowl. Note that the bowl has actually shrunk from its previous outside diameter – When planning to do a very deep blast, I find I must usually oversize the bowl initially so that the outcome will be closer to what I want. Some people don’t like this look – It’s a matter of personal preference – but it should be stressed that this IS the natural result of a deep blast. You’re literally looking down at the strongest parts of the wood. I make most of my blasts this way because I like and appreciate the natural look. For me, the natural “chaos” of the result is the whole point, in a creative sense – I enjoy starting with a billiard or whatever and seeing what its inner architecture will reveal. However, there are ways to do a deep blast and still provide a more-or-less round shape. One method is to use extremely fine nozzles to allow the blasting to be very precisely targeted in order to retain the overall shape while opening recesses, but this is rare – I know of perhaps three or four pipemakers on the planet who do this sort of work. Another method, more common and simpler, is just to do your deep, high pressure blasting, and then sand across the exterior to bring the shape back to a more precise circle, then lightly blast over the pipe again. You can retain the deeper grooves while providing a full sandblast finish.

This gets much trickier when we move to the stem & shank. One can blast the hell out of the bowl because it has nothing to compare to – nothing it must join to – but the shank must join the stem in lines and visual bulk. Remember, heavy blasting actually makes the wood shrink, so a stem & shank join can quickly look awkward. Probably the most common approach to this is to tape a masking ring around the wood that joins the stem and then blast lightly down the shank, producing a result like A, below. 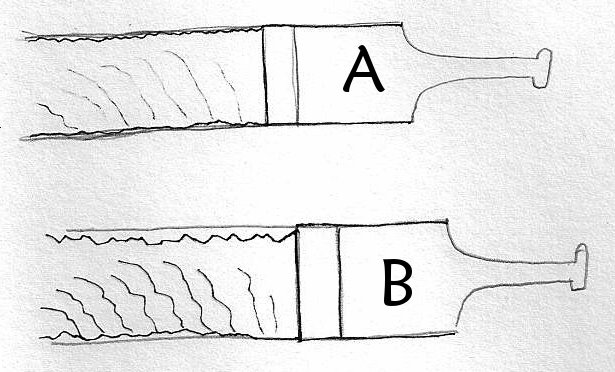 Picture B is the challenge for all pipemakers – If you carry the same pressure and aggressive blasting from the bowl down the shank, you will end up with this look, which I term “shrivel shank”. The shank gets noticeably smaller than the stem. The blast is deep and dramatic and even with the bowl, but the lines of the stem-to-shank join are spoiled. Many collectors are fine with this, and prefer the “all over even” blast depth to a varying blast depth, but it bugs me, personally. I like consistent, smooth lines from stems to shanks. Of course this varies sometimes – If I’m going for a particularly gnarly, battered appearance, I’ll often do this purposefully, in order to enhance the overall look of the pipe being really weathered.

I suppose what I’m trying to explain is that all these effects are trade-offs in one form or another. There’s no such thing as “perfect”, there are just different options. 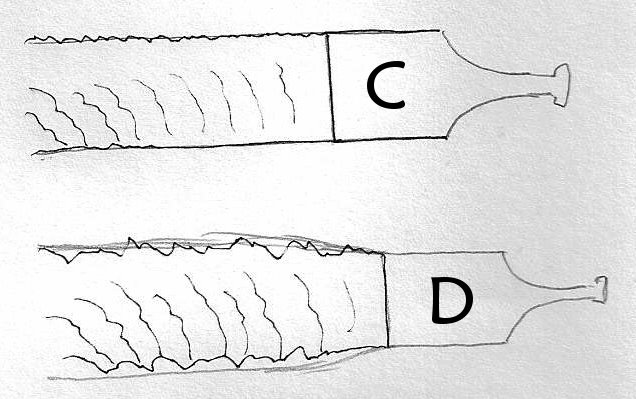 What I have been doing lately is avoiding the masked-off shank briar ring altogether, and simply fading the blasting intensity down the shank, as shown in C, above. Blast carefully, with an eye towards not hitting anything hard enough to start seriously shrinking the shank. The shank nearer to the bowl can be left a bit thicker and blasted deeper, but I reduce the pressure as the blasting approaches the stem join. This retained that stem/shank line I love so much – one even, connected line top and bottom, rather than a shank with a stark “drop off” where the blasting begins. Matter of personal choice, really.

One other option is to make the whole shank fatter to accommodate a heavy blast to match the bowl, but this doesn’t work so well in action. It’s hard to get the stem-to-shank join flat, for one, and the higher, harder portions of the wood will remain even after blasting, poking out beyond the stem line I desire.

I hope this helps collectors by providing a bit more of a full picture regarding how and why various sandblasting decisions are made!

Hey Trever! How about somthing really good for us guys who’ll be staying home from Chicago? Somthing that those darn guys who get to go will really be sorry they missed reading…well until the get back at least. By which time we’l have had all the fun but chatting about it and such. Yea!

Thank you, Trever. I’ve been such a fan of your sandblasts that I finally bought my first sandblast pipe, a W.O. Larsen bent brandy estate with a beautiful, deep ringblast.
And as for your modesty … if YOU aren’t an expert on this subject, then pray tell who is?

Thank you Trever for that article. As a fiddler in pipemaking I have always wondered about what could go wrong in blasting ;). Haven’t ever gotten to it since I don’t have the equipment, but I have been thinking of the stem/shank issue along those terms. My thought was to leave a thicker part of the shank (as you descibe in D above)but combine it with a smooth ring (as in A) and tape off that smooth part and try to blast down to make ends meet so to speak. What do you think?
Please keep on writing those articles about different challenges! Looking forward to the grain tilt issue!

Thanks, all! I’m happily surprised that I managed to be both informative AND clear in the same post! 😉 But I’m hardly an expert on the subject. I’d reserve that sort of term for guys like the fellow we work with in Nantes, who’s family has been in the professional blasting business for a couple generations. This was just stuff that’s been percolating in the back of my mind for a while. Doing a good sandblast is like throwing a handful of change into the air and then having people critique your personal skill based on how evenly and impressively the coins land in pattern.. it’s really very random. I plan to follow this up with at least one or more articles on the same, highlighting other oddities such as variance in briar and grain tilt.

Too cool Tever. I’m glad my comments lead you to writting this. having never blasted a pipe (or anything else for that matter) it never really occured to me how the line of the stem/shank junction could be thrown off so much.

Blasts are really odd-birds in that respect aren’t they? Rusticxted pipes too. You want to strike a harmounious, fluid line with the piece over all. But the blasts that are often the most sought after are the OKF’s (as Jim Cooke calls the – sorry I don’t mean to name drop or anything, I just love the phrase he uses and don’t wany anyone to think its mine. Just in case its Old Knarly F#(%ers) which naturally rebel against the harmonious lines. If I’m not mistaken, this was the reason why Dunhill didn’t put shape stamps on their early blasted pipes, no?

I wonder what blasted vulcanite looks like? I know that a few pipemakers carve their stems when doing a carved bowl. Anne Julie does this with some of her tulip pipes.

Very Informative Trevor! Thanks for taking the time writing this and posting it for us. I think that the article has a wealth of information and touches base on items that I never thought of before.

Trever, this is one of your most informative and clearly written posts on a subject about which you are known to be an expert. Thanks for the explanation and the visual references. It may not change how I look at blasts that I particularly love, but it will inform my level of respect and appreciation for the creator.