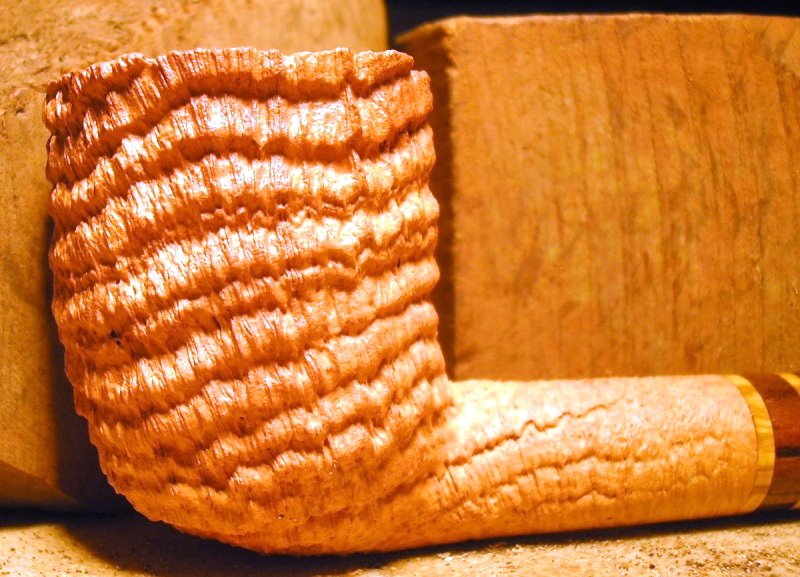 Here’s the first finished billiard of the bunch I’ve been working on recently. Zowie! It didn’t just come out well, it’s probably the best looking blast I’ve done so far this year. For another shot:

It’s funny, because this is precisely the sort of blast that some people would probably examine and pronounce, “Carved, harumph! Yes yes, that blast is obviously carved!”… and yet, no carving tool ever touched that surface, it’s completely natural. The lesson in this is that unless a person was actually IN the workshop watching something get made, one should never put total faith in any declarations about how any maker creates his pipes. One detail I enjoyed doing was the exotic wood shank decor – I haven’t done one of these in a while and have always liked the look. In this example it’s a ring of bocote flanked by two olivewood rings set in a handcut cumberland stem. I should probably mention that the pieces are all handcut, too – Probably a lot of folks believe such stuff is just “off the shelf” in pre-made rings, but on Talbert Briars like this I actually use rods of olivewood and rods of every other wood, drilling them out to fit the stem and turning and cutting each one to size by hand, rather than having them readymade. Takes much more time, but that’s the nature of a high grade pipe! 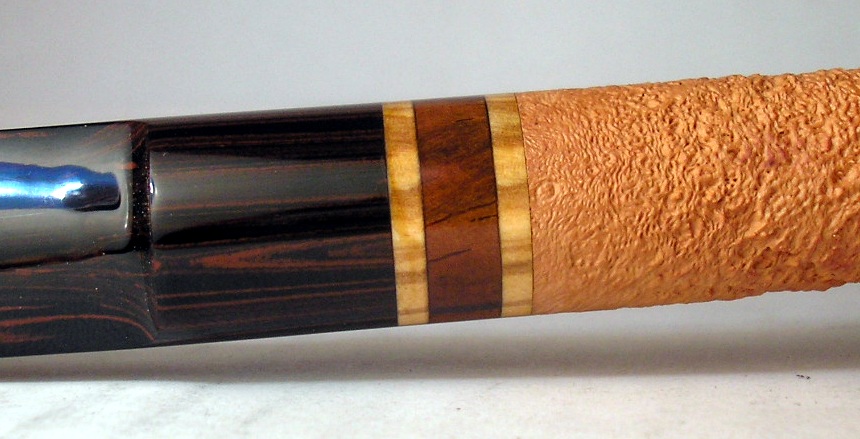 Anyway, it’s certainly a nice way to kick off the billiard run! (In some ways, this is bad, because it’s going to be hard to equal this, much less top it) I’ve got several orders for noseburner versions thereof, some oversized ones, the usual mix. Look for the blog to be awash in photos of billiard variations in coming days & weeks. I’m not sure yet what will become of the pipe above – haven’t heard anything back from the fellow it was initially offered to, so it may be sold or it may end up on the site, I’m don’t know. Given its size and light weight, I’m sure it will end up as a happily enjoyed pipe for somebody. Scratch that – the pipe is now sold.

In other news, there is a wandering Goblin available for sale! I made this one last October for a German collector, but circumstances have pushed him to part with it. I remember it well – It’s extremely round and fat, with large curled claws and a short, beefy horn stem.

It’s different from the other Goblins in two ways – it is a 9mm filter pipe, and it has a stem ring of a different horn pattern as part of the larger filter/tenon engineering. Anyone interested in picking up a fun Goblin should email Andreas Rosczich, and you can talk over the price with him. Here are some more pics of the pipe: 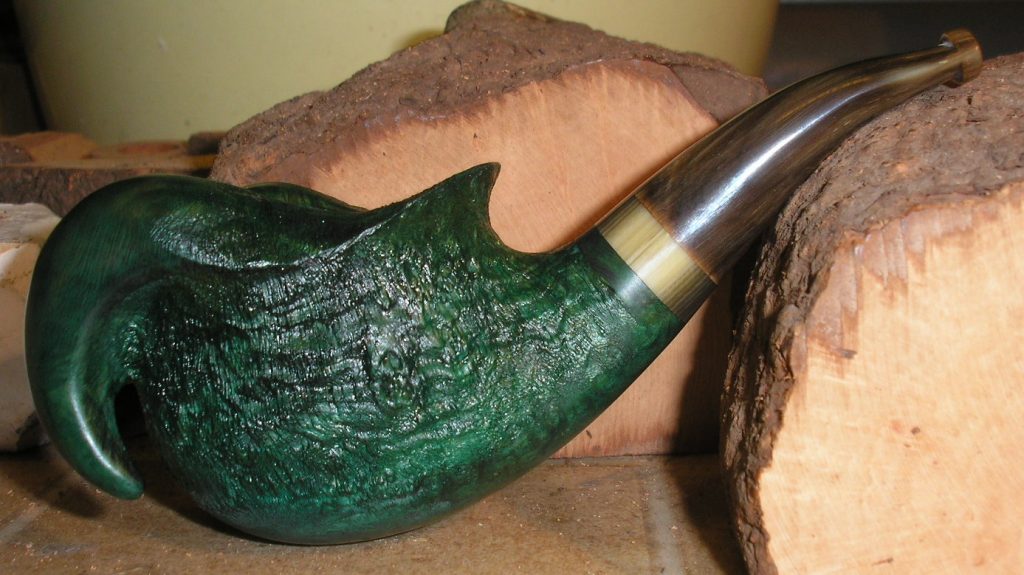 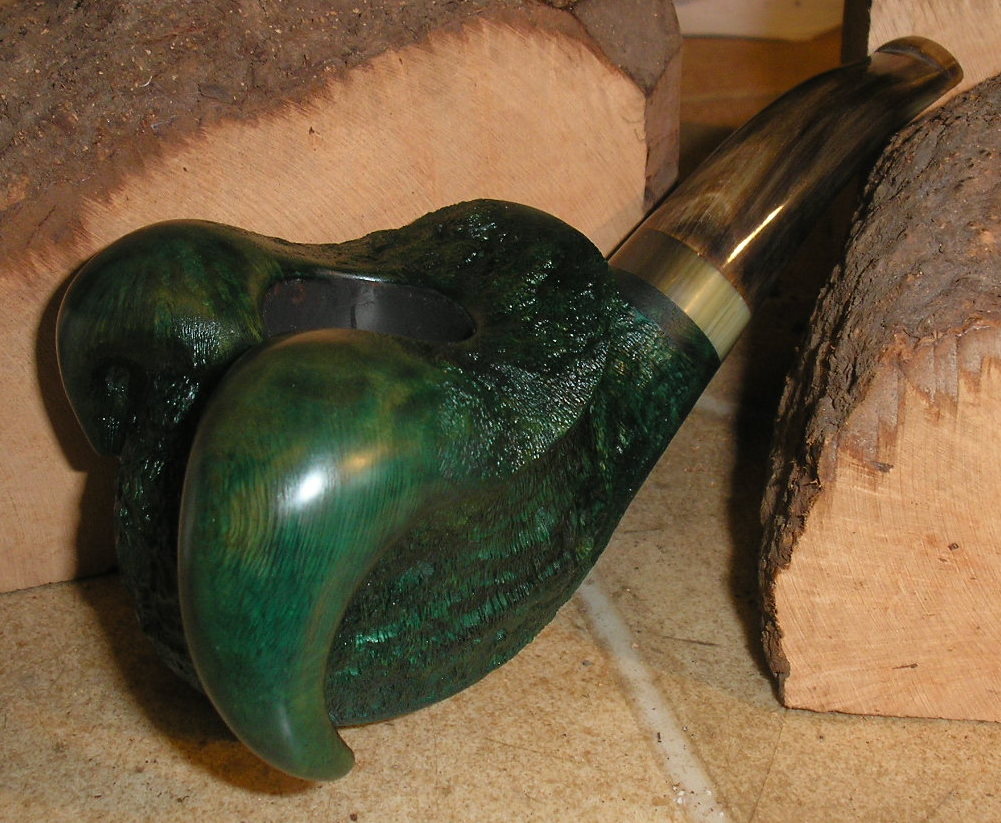 Last of all, the LB princes that I’ve been doing the Virginia flavoring experiments on are just about ready to be finished. I’m thinking of finishing the VA Prince and the regular, non-tweaked LB Prince together and putting them both on a stand for sale as a set, but I’m not sure if that would be sellably viable or not. On the one hand, I (as a smoker & collector) would be fascinated to have the two identical pipes with different smoking flavors and strengths, but OTOH, Ligne Bretagne buyers generally aren’t looking to drop 230 euros on a single purchase package like that. So, I dunno… (If anyone is specially interested in buying the two as a set with stand, please email me)

They came out well, though. They’ve now been tracked through two full heating cycles and I’m just monitoring them daily until they settle into humidity equilibrium with the environment before I start the drilling and finishing. Oddly, weight loss on one was minimal (.1 gram) while the other dropped a full .7 gram – a 3% loss overall, not bad for these older LB stummels that are virtually impossible to get to shed weight after years of drying.

Neat blog Trever. That blast on the billiard is killer! I am curious as to why the shank didn’t blas out the same as the bowl? Was it just a matter of agressiveness or did the character of the wood change that dramatically?

The LB princes sound like a really cool set! I’d be interested in them. Of course, I may be compelled by that irressistable force of briar to contact your friend regarding his goblin! D’OOH!

Hope you and yors are doing great!