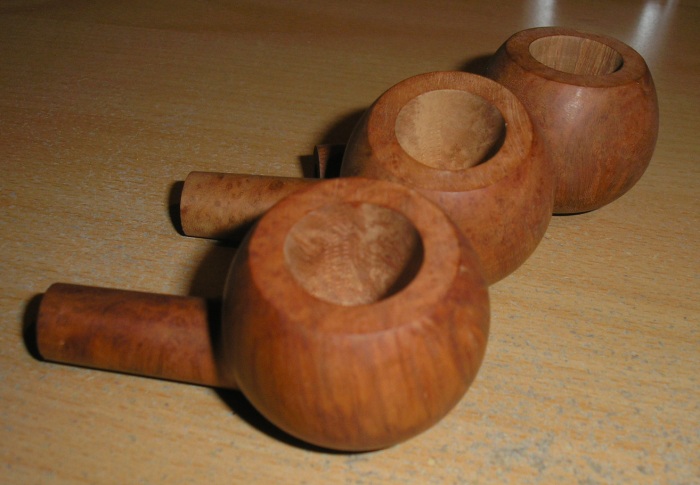 For a number of years, I have pursued a rather unusual side-hobby to my pipemaking – that of tweaking briar to favor different tobacco types. This could be called a curing process, but I’ve never really liked that term since it suggests that somehow briar is innately bad unless something is done to it, and with good briar and proper aging, I don’t believe this to be the case. However, there are a variety of tricks and techniques to affect the wood – leeching out remaining tannins, imparting different flavors, etc. I got interested in this a good ten years ago or more and have done quite a number of experiments since.

Along the way, I found one particular treatment that seemed to excel in creating a superior Virgina smoker. It utilizes some basic, organic acidic soakings to soften and dissolve remaining compounds in the wood, and leaves an interestingly tangy, ideal VA flavor tint… I’ve sold a number of pipes treated this way privately over the years, and all reports have come back that the pipes became the owners’ favorite VA and VA/Perique smokers. But I haven’t wanted to actually apply the technique to any pipe brands on a large scale, since I don’t want to narrow the smoking performance down so much. However…. I’ve been eager to try this again, and thought that this time around I would A) create a series of blog posts that would follow the progress, and B) finish a pair of pipes – one treated, one untreated, for sale as a pair for “buyer entertainment”… The buyer can try both and decide for himself which he prefers and why.

I took some care to pick Ligne Bretagne prince stummels that all shared a similar grain arrangement, and I picked a third testing candidate to treat and smoke myself, just to insure that the end result isn’t too wretched. This will be the first time I’ve tried this in several years, and the first time with French-bought ingredients using a different oven, etc… all great potential to screw up the outcome! But at least I’ll have a trial in there for myself, so I can avoid the possibility of selling a poor-tasting pipe if anything goes south.

So, for starters, Pipe #1 will get no other treatment than the magical mystery effect of sitting in a sunny window for a few weeks, while pipes 2 & 3 are about to be seriously heated up. Before heating, they weigh out as follows:

That’s a pretty typical variance for machined stummels, and a great example of just how handy it is to have thousands of these things on hand to experiment with. Back when all I had were briar blocks and handmaking everything, any sort of experimentation was doomed to hell and lunacy because the end results would vary so much in size and weight, and thus also in thickness, absorption, etc. With a stockpile to dip into, it’s quite easy to try several varying ideas at once and have ready-to-smoke examples that are very easy to compare. After heating, the weights of 2&3 are down as usual:

That’s fairly typical – a 5-7% weight loss due to evaporated moisture content. Now they’re nice and hot and dry, ready to go into their overnight soak. More to come!

Pretty interesting idea, look forward to hearing more about it.