Biz News – Five more Ligne Bretagnes are posted to the catalog! Not quite as big a post as last week’s, but still, there are plenty of pipes in a wide variety of shapes to choose from. Check them out!

The results of the polls posted to the left have been interesting but not entirely unexpected, we pipe people being a conservative bunch and all, not usually on the cutting edge of this newfangled web stuff. A majority of voters are saying they have no interest in a Facebook presence so I guess I won’t worry about that right now, though I may return to it in future if it keeps growing. Social networking sites are crazy that way, though – One minute everyone MUST have a MySpace page and the next minute MySpace is, “like, soooo five minutes agooo” as everyone migrates to the Next Big Thing.

Regarding Twitter, the #1 vote seems to be, “What is Twitter?” Twitter is another social site/”thing”, a way of sending IMs of a sort to your circle of friends on their computers. When I first saw it, I rolled my eyes and thought, “Oh god, another freaking chat app” because, well, I hate IM chatting. Or maybe I should be more specific – I don’t hate IMing if I have nothing else to do, am in the mood for it, and have a block of time to utterly waste, but otherwise I find nearly all forms of internet chat, from Messenger to IRC, to be unbelievably annoying… largely because if I’m at the computer to be “chatted”, I’m either working or playing a game, and neither warrants interruptions from someone I’m expected to be nice to. It’s just that it’s so inescapable.. I don’t dislike the people, per se, just the whole social “You’re expected to drop everything and refocus your attention on this person instead of the work you were concentrating on”. 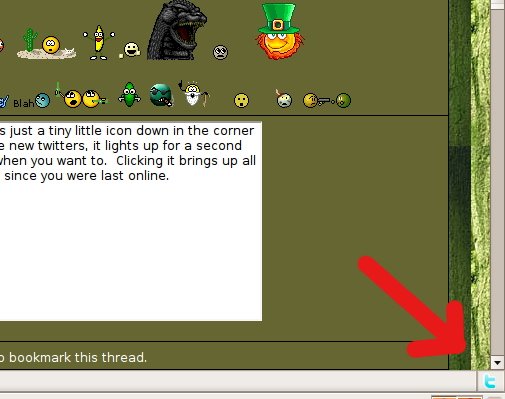 Thus, I was prepared to loathe Twitter and never think of it again, but in fact, it has turned out to be great fun. Imagine my absolute shock! Twitter doesn’t work like a chat program – There’s no expectation of interaction, it’s just a handy way to broadcast fun news and current events to your friends. Maybe they’re at their computer, maybe they aren’t, but they’ll get your latest Tweets the next time they look at their browser. The way it works is simple – Make up a Twitter account. Then install the Firefox extension Twitterfox. The result will look like the pic to the left – It’s just a little blue T down in the corner. But it works like a combination answering machine and broadcaster, receiving and storing any Twitter announcements from your subscribed Twitter friends, and giving you a convenient pop-up text box to send out your own comments, like so: 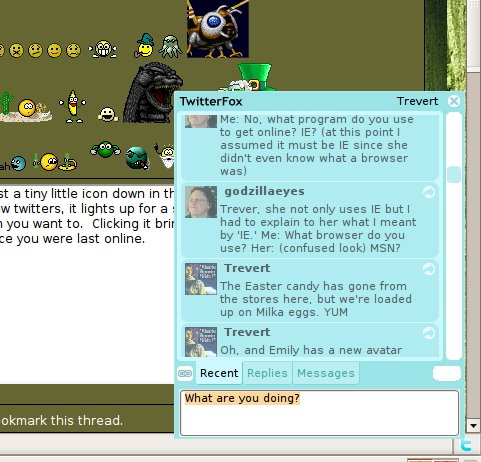 What’s nice about it is that it lacks the social pressure of IM chat – One doesn’t HAVE to reply immediately if you’re busy or distracted, but the messages are stored for later reply as you like. I’ve already been using it with a personal account connected to some friends for a couple of weeks now, and quite enjoy it.

And I believe it could be a very handy business & hobby tool for social networking. Announcements of website updates could be easily sent as Twitter broadcasts with no worries of emailing, spamtraps on mailing lists & false positives, etc. Plus, it’s more informal immediacy would make it handy for broadcasting news of just what was happening in the workshop at a given time, or other related news. Pipe collectors could network and follow the Twitter feeds of various pipemakers they like, and offer instant commentary on updates, announcements, etc. I dunno, it could be potentially useful and fun. I do not yet have a business Twitter account, but I may make one if there is any interest in this.